Promote Ukraine > Brussels Ukraïna Review > Elmar Brok: “Who has done for Ukraine more than the EU?!” 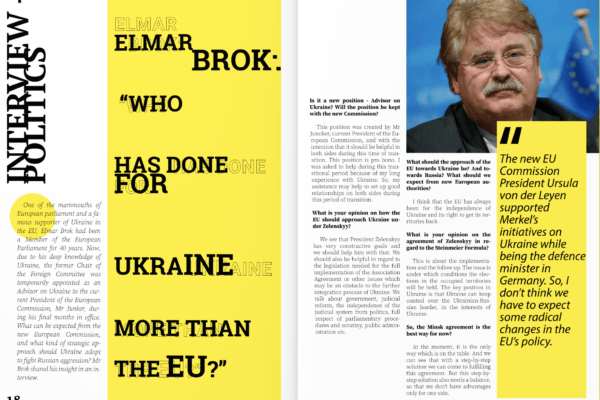 One of the mammouths of European parliament and a famous supporter of Ukraine in the EU, Elmar Brok had been a Member of the European Parliament for 40 years. Now, due to his deep knowledge of Ukraine, the former Chair of the Foreign Committee was temporarily appointed as an Advisor on Ukraine to the current President of the European Commission, Mr Junker, during his final months in office. What can be expected from the new European Commission, and what kind of strategic approach should Ukraine adopt to fight Russian aggression? Mr Brok shared his insight in an interview.

Is it a new position – Advisor on Ukraine? Will the position be kept with the new Commission?

What is your opinion on how the EU should approach Ukraine under Zelenskyy?

We see that President Zelenskyy has very constructive goals and we should help him with that. We should also be helpful in regard to the legislation needed for the full implementation of the Association Agreement or other issues which may be an obstacle to the further integration process of Ukraine. We talk about government, judicial reform, the independence of the judicial system from politics, full respect of parliamentary procedures and scrutiny, public administration etc.

What should the approach of the EU towards Ukraine be? And towards Russia? What should we expect from new European authorities?

I think that the EU has always been for the independence of Ukraine and its right to get its territories back.

What is your opinion on the agreement of Zelenskyy in regard to the Steinmeier Formula?

This is about the implementation and the follow up. The issue is under which conditions the elections in the occupied territories will be held. The key position in Ukraine is that Ukraine can keep control over the Ukrainian-Russian border, in the interests of Ukraine.

So, the Minsk agreement is the best way for now?

Will France and Germany take an assertive stance towards Russia or towards Ukraine in the next Normandy Format talks?

Do you think the new European authorities will support Ukraine?

The new EU Commission President Ursula von der Leyen supported Merkel’s initiatives on Ukraine while being the defence minister in Germany. So, I don’t think we have to expect some radical changes in the EU’s policy.

But the new President of the European Council, Charles Michel, says that the sanctions against Russia should be lifted, for example.

You should also write about what the EU does for Ukraine, directly and through its financial institutions. Since 2014, the EU and its member states have supported Ukraine with around 18 billion euros in loans, grants and guarantees. ….We have also opened our borders, nobody else has done it, not even the Americans. We also have a free trade agreement, which caused a sufficient increase of Ukrainian exports to the EU. No other country, not even the USA, has done for Ukraine as much as the EU has done. We should consider not Trump’s telephone calls but facts and figures!

So, do you expect the sanctions to be prolonged?

For the moment we pay much more for the sanctions then the Americans. Meanwhile the Americans have increased trade with Russia in the past five years. Look into the figures. But they will be prolonged under the current circumstances.

Even though there is a lot of criticism from the USA and other countries saying that the EU does little for Ukraine?

It is propaganda! They do nothing! In financial terms, we do 20-25 times more than the USA. One day Ukraine will take note of it.

What developments in Ukraine may influence the visa-free regime?

Actually, did the USA grant a visa-free regime to Ukraine? Did they agree to a free trade zone? Is there an Association Agreement between Ukraine and the USA?

So you think that the EU policy towards Ukraine in the last five years was quite positive?

Who has done more?

Do you think the EU is still united in the question of Ukraine?

Different EU nations have different approaches to the question of Ukraine, but nevertheless the sanctions are unanimously prolonged and prolonged … But what is difficult is that all the time we are blamed for doing nothing. Then it becomes difficult for us to explain it to our citizens.

Are there any reasons not to believe this?

What do you think about Crimea? Do we have any chance to get it back? The new Ukrainian president believes it, but many people are sceptical.

Firstly, the question of eastern Ukraine should be solved.

By the Steinmeier Formula?

Whatever is possible … Step-by-step, keeping in mind the interests of Ukraine. All options will be discussed by the Ukrainian government.

Do we still have any chance see Crimea returned? In 10 years, 20 years?

I know only that it took 45 years to get Germany united again. So we have some experience in that.

So, there is a chance?

Make it successful, a democratic state with high level of life so that the people in Crimea will see that they can be more successful in free Ukraine than in Russia. And then it is possible. Reform your state! And you will be stronger with it. And here we, the EU, are helpful. With strategy, with visa-liberalisation, with investments in Ukraine, with strong and independent institutions underpinned by the rule of law. And we will never recognize this annexation, and Kyiv should never recognize it. But for the moment concentrate on how to get rid of this devastating war.