Defenders of Democracy and Freedom Fight Against Country of Evil 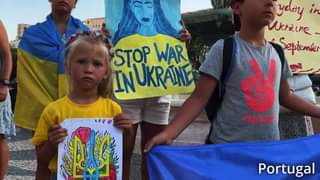 Five months have elapsed since the start of Russia’s full-scale war against Ukraine, five months of the undefeatable fight of the defenders of democracy and freedom against the country of evil, the country of unfreedom, the country of imperial appetites: Russia.
Over the last 151 days, more than 1,000 children were injured, and more than 350 of them died. Ukraine is fighting to survive; it’s a fight for existence, democracy, and freedom. Every day Ukrainians die for the values ​​of every European.
This war affects not only Ukraine. Russia destabilizes the whole world.  The prices for energy resources are a simple example, but there is also the risk of starvation in certain countries, which can generate an immense migration toward Europe; this is the goal of Russia.
Only together can we win, and we will definitely win!
This video was recorded on behalf of the international initiative in support of Ukraine.
Video
Follow us on Twitter
Share:
Hybrid War Peace for Ukraine Russian aggression Russian world Ukraine v Russia
Share: