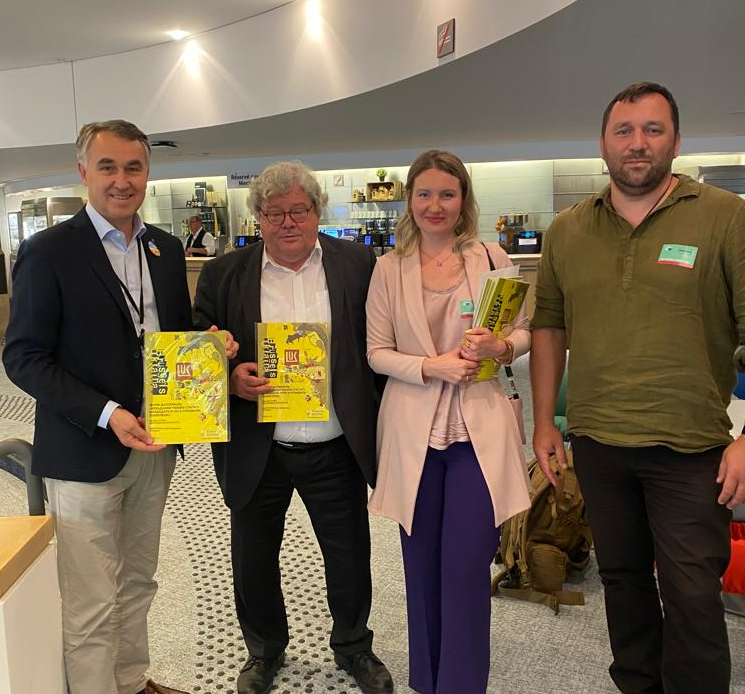 Last week, on the day when Ukraine received the status of a candidate for EU membership, many MEPs held the Brussels Ukraїna Review journal in their hands. During her speech at the Ukrainian Hub in the European Parliament, president Roberta Metsola delivered stood against the background of the banner of Promote Ukraine, an NGO which runs the mentioned magazine.

Promote Ukraine with its numerous projects (such as Brussels Ukraїna Review) is one of the important tools in the network of Ukrainian agents of influence in the West.

The term “Ukrainian agents of influence” was used in a recent analytical article “Zelensky and His House of Cards.” Who and how Is Pushing Russia into the Abyss of Sanctions,” published on Liga.net. This article analyses “how diplomats, politicians, businessmen, lobbyists, economists, and celebrities are pushing the world towards one goal, i.e. winning the war and overthrowing the regime of Russian dictator Vladimir Putin.” Liga.net notes that lobbyists in the case of Ukraine are rather a relative concept because Ukraine is actively assisted by an extensive network of Ukrainian agents of influence who do not have official status.

Promote Ukraine is exactly one of those many pro-Ukrainian organisations in the West that do not have an official representative status, but without such organisations, it would be impossible to imagine Ukrainian resistance.

“Promote Ukraine is a non-profit platform for the exchange of experience between experts and representatives of civil society in Ukraine and the EU. We are a politically and state-independent public organisation registered in Belgium. We have a powerful team of professionals and volunteers who, since the Russian invasion of Ukraine in 2014, have been striving to strengthen the voice of Ukrainian civil society in Europe,” says Marta Barandiy, founder of Promote Ukraine.

In 2019, Promote Ukraine launched its own printed journal, the Brussels Ukraїna Review, published in Ukrainian, English, and several other European languages. It was this journal that was in front of the eyes of European deputies at their workplaces when they voted for the common future of the European Union and Ukraine.

“What is the Ukrainian strategy? What will Ukraine’s integration into the EU look like? What are the prospects for new interstate unions in the modern world? What is a new European future through deputinization? Why are Western peace doves just useful idiots for the Putin regime? Why is LUKOIL in Belgium a sponsor of terrorism and a cover for the Russian special services? Why can’t culture in Europe be outside of politics? How, because of the war in Ukraine, does Putin provoke food riots in Africa and create new hotbeds of military tension in the world? How is the integration of Ukrainian refugees into the EU on the example of Belgium?” – In the latest edition, the experts interviewed by Brussels Ukraїna Review gave answers to these questions.

And it was with this “road map” that the publication introduced the European deputies before they made one of the most important decisions for modern Europe.

Brussels Ukraїna Review is aimed at leading European and Ukrainian politicians, opinion leaders, and public figures. Having a joint editorial office in Brussels and Kyiv, an extensive network of partners (experts, journalists, officials, politicians, representatives of non-governmental organisations, and international organisations) in the EU and Ukraine, Brussels Ukraїna Review consolidates and represents Ukrainian expertise in Europe, as well as European expertise in Ukraine.

“Usually, expertise remains behind the closed doors of conferences, meetings, and various events. It provides an opportunity for dialogue only to selected participants, while behind the scenes of official representations and international organisations there is a large number of specialists who cherish their experience and wait. We provide them with this first-hand expertise, consolidate it and introduce it to the target group of key decision-makers in European and Ukrainian politics,” says Marta Barandiy.

On the sidelines of European government structures, Brussels Ukraїna Review has already received the status of a media whose forecasts should be trusted. The worst forecast made by the journal’s experts in December 2021 came true on 24 February this year.

“Putin’s “winter military exercises” have escalated into a full-scale invasion. This moment crossed out the entire system of international security that the states of the world had been building for decades to prevent the Third World War, Marta Barandiy notes. In fact, the Third World War is already ongoing. Its transition to a hot stage at the global level is only prevented by Ukraine’s resistance to Russian aggression – at the cost of tens (or maybe even hundreds) of thousands of lives, the price of the unyielding spirit of the Ukrainian army, volunteers, and civil society.”

After all, if Vladimir Putin’s venture in Ukraine had succeeded, all dictatorial regimes would have received a signal that military aggression in the modern geopolitical paradigm would never be punished. And then most of the smoldering conflicts around the world would go into a hot phase.

But largely thanks to the incredibly hard coordinated work of Ukrainian lobbyists, media, volunteers, and activists, our country has already received the status of a candidate for EU membership. And it continues to receive such important international financial and technical support to effectively counter the enemy.

Ukrainian Military Protects Us and Our State! Support and Help them!