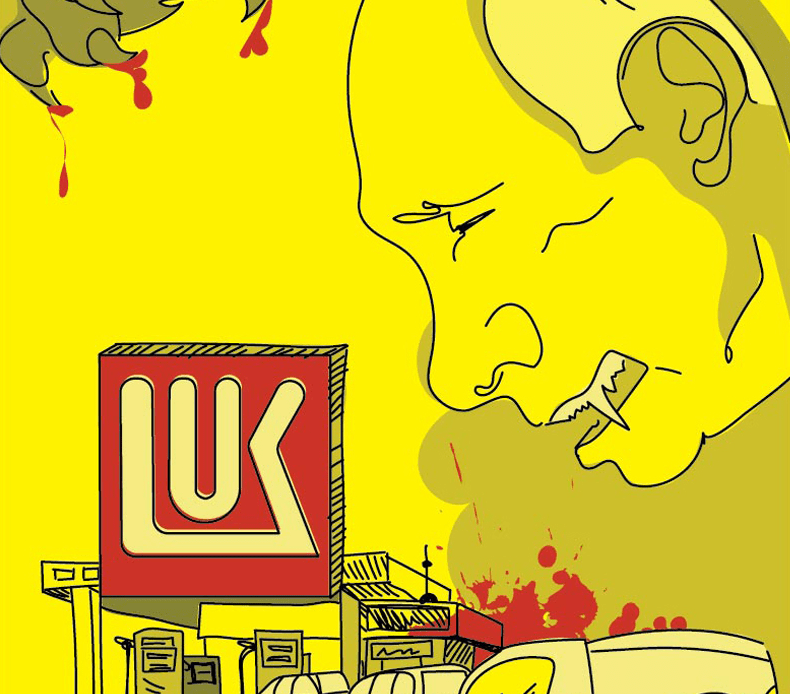 Who is Lukoil Belgium?

Lukoil Belgium NV is a limited liability company registered in Flanders with its head office in Vilvoorde and statutory capital of 6,197,338.00 EUR.

Lukoil has been present on the Belgian retail market since 2007 after acquiring a network of petrol stations and developing its sales network in Western Europe. In recent years, the network has been growing and today has 184 petrol stations in Belgium.

How is it linked to Russia?

Lukoil is Russia‘s second-largest oil company with a market value of €49.5 bn. Lukoil Belgium NV is a subsidiary of its Russian holding company PJSC Lukoil in Moscow.

According to the latest available financial reports, Lukoil Belgium NV has two shareholders. One of which owns 99,99% of the shares is Litasco SA, a Swiss- based trading subsidiary of Lukoil. Litasco SA was founded in 2000 in Switzerland and it is the exclusive international marketing and trading company of Lukoil. It acts as an intermediary company and also is a major shareholder of other Lukoil subsidiaries in Europe.

The company claims that it is “an independent international company,” which in the oil industry is a term used to distinguish multinational commercial firms, like Shell or Total, from state oil companies like Saudi ARAMCO or Venezuela’s PDVSA that are owned by the state and hold oil reserves in the country that owns them. Lukoil undertakes 91% of its oil production in Russia. Nor indeed in Russia, is there such a thing as an independent large energy business. Even when shareholders are private individuals, their property rights are not secure, and can be removed or reassigned at the whim of the Kremlin – as Mikhail Khodorkovsky found out to his cost.

Bulat Subaev – the current General Manager at Lukoil Belgium NV, held until recently the same position in Lukoil Bulgaria, where during his tenure, the Bulgarian authorities launched several investigations into Lukoil. These covered the abuse of dominant market position, tax violations, and even financial fraud. For many years, Lukoil Bulgaria had been declaring financial losses despite its dominant position on the market, and as a result, no income taxes were paid to the Bulgarian state. Where did the money go? According to Radio Free Europe, “The profits always go back to Russia.” Given this information, it should come as no surprise that Putin has awarded Bulat Subaev “For Merits to the Fatherland.”

Because sanctions have not been extended to them, people like Subaev, with close ties to the Kremlin, keep doing business in Europe and could have access to decision-makers in national governments and in the European Union. While Belgium has expelled many Russian diplomats for allegedly spying and posing risks to security, non-diplomats and “Russian lobbyists or businessmen” are still allowed to operate.

Is Lukoil linked to Russian Intelligence?

The presence of high-level Russian management with strong links to the Kremlin poses serious threats to Belgian as well as European security. The growing role of EU and NATO institutions have made Belgian cities such as Brussels and Antwerp major hotspots for international espionage. Lukoil has a long history of connections with Russian intelligence and it has been caught in various espionage and corruption scandals in Cyprus, Czech Republic, Bulgaria and Romania. Considering the fact that Belgian media outlets have reported that a third of Russian diplomats are actually intelligence officers, there is a strong case for Belgian authorities to investigate whether Lukoil is involved in similar activities here.

How does Lukoil Belgium NV finance Russia’s war against Ukraine?

Lukoil petrol stations in Belgium are managed as franchises by local entrepreneurs. Under this formula, the entrepreneur is responsible for Lukoil’s fuel sales and sales in a shop. The entrepreneur will receive a commission for this that is calculated on the sale of fuels and the shop that is managed by the entrepreneur.

Some petrol station entrepreneurs claim that they “have nothing to do with Putin and his regime.” However, every franchise agreement requires a payment to be made to Lukoil for the right to use the company’s brand, products, and intellectual property, and we are not even talking about the oil origin and payment for it.

Swiss intermediary “Litasco SA is the key player in the transactions. It buys crude oil from Russia’s Lukoil and then sells it to the European refineries. Acting as the intermediary, Litasco SA seeks to buy low and sell high. The difference goes to Litasco SA, which is registered in Switzerland, where [corporate] profit/income tax is very low and there are legal options that allow this profit not to be taxed and go directly to Russia.”

According to the latest open financial report of Lukoil Belgium NV, the company turnover for 2020 was around €730 million with €36 million as a profit from which 15% taxes were paid to the Belgian state. There are around 60 full-time employees employed by Lukoil Belgium NV.

Russian media propagandists proudly report that “Lukoil set a record this year – one trillion three hundred billion rubles in taxes paid.” Unfortunately, there is no data on how much of this money has been spent on weapons and soldiers, who commit war crimes in Ukraine, kill innocent civilians, rape women and children, but since Lukoil is one of the biggest taxpayers in Russia, it is likely that this sum is substantial, and it is very unlikely there would be no financial input from Lukoil into the war.

Lukoil is under US sectoral sanctions that impose restrictions on agreements regarding individual projects.

Lukoil Belgium NV has not been directly sanctioned yet but the Russian billionaire, and until recently, the CEO of its holding company in Russia, Vagit Alekperov, is already on the UK sanctions’ list. As there have been personal sanctions imposed on him, he has resigned in order to not affect the company’s operations.

The sixth package of sanctions introduced by the EU against Russia covers crude oil, as well as petroleum products, delivered from Russia into the Member States, with a temporary exception for crude oil delivered by pipeline. This might mean, that tankers with Russian origin oil might not be allowed to dock and unload at Belgian ports. Therefore, Lukoil petrol stations’ franchisees will have to diversify if possible under the franchise agreements to other sources; otherwise, they won’t be able to operate in Belgium selling Russian origin petrol.

Belgium is the world’s 7th largest importer of fossil fuels from Russia. For the past two months, the newly merged port of Antwerp-Zeebrugge has also been the second largest import port worldwide for Russian fossil fuels. For Antwerp, this mainly concerns oil (products), with a total value of €600 million. 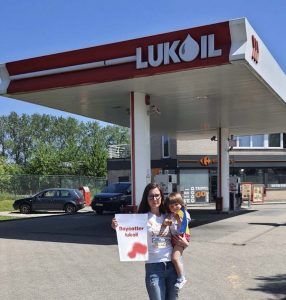 In April this year, we Promote Ukraine volunteers, launched a Lukoil boycott in Belgium with the main goal to share information and raise awareness about Lukoil as a Russian company sponsoring Russia’s war against Ukraine.

Given the unprecedented support and solidarity of Belgians with Ukraine, the majority of consumers support the boycott and refuse to fill up their tanks at Lukoil. Upon seeing the protesters, many Belgians choose not to drive into the forecourt of Lukoil’s petrol stations. Even a petrol station entrepreneur has supported the activists by bringing water and brainstorming ideas on changing their franchise to another brand or even switching to a greener fuel like hydrogen.

As a result of the Lukoil boycott, more people are now informed and can make a better choice but we know that many people continue to come to Lukoil because of their corporate cards. Therefore, we have brought this issue to the companies’ attention. For example, at one petrol station, during the boycott, 15 out of 20 cars turned back, three purchased fuel because of their corporate cards and two stopped because they had run out of petrol and had no choice.

The boycott of Lukoil is not just a Belgian phenomenon. Many countries support this movement. In New Jersey, United States, the city voted to suspend the licenses of Lukoil petrol stations, Shell is selling their business in Russia, Italy is looking into nationalising their Lukoil refinery, and this is only the beginning.

Although many Belgians support boycotting Lukoil, some feel concerned about the consequences. For example, people are worried that if Lukoil Belgium shuts down, its Belgian employees will lose their jobs. While this might be true, it needs to be set against to Ukrainians losing their lives because Lukoil feeds the Russian war machine. Nor do petrol station franchisees have to shut down. A franchisee should switch its franchiser to stop paying royalties to the Russian parent company. Secondly, the upstream business must stop purchasing gas and oil from Russia by switching suppliers. If it does not, perhaps Belgium could nationalise refining and distribution facilities, like Italy is considering. Last but not least, Lukoil Belgium must replace those top management employees potentially involved in espionage or unfair business activities such as the abuse of power, tax legislation violations and financial fraud.

Some doubt the effectiveness of the “delukoilisation” of Belgium. Lukoil consumers say that the company pays taxes in Belgium, a significant share of which is directed towards the support of Ukraine. However, relying on this is counterproductive. While it is true that Belgium provides vast financial and humanitarian aid, both to those in Ukraine and Ukrainians who entered Belgium as temporarily displaced people, supporting the business that finances the war against Ukraine diminishes the effectiveness of such measures. By supporting a Russian company that sponsors Putin’s regime, Belgium only increases the need for aid to Ukraine.

It is crucial to understand that gas and oil export is the key revenue source for Russia. It accounted for 36% of the country’s total budget in 2021, roughly $9.9 billion in revenue per month. Meanwhile, estimated direct losses from the war have cost Russia about $3 billion per month, three times less than the country’s energy revenues. This is a clear illustration of just how effective halting purchases of Russian energy could be for stopping Russia’s war against Ukraine. “Delukoilisation” is an important part of defunding this war.