The presentation of the “Diary of an Illegal Soldier” by Olena Bilozerska, an officer of the Armed Forces of Ukraine, a journalist, blogger and public figure, took place in London. The book contains recollections of the events on the front line in 2014-2017 in eastern Ukraine. Promote Ukraine includes this documentary book on its “Bookshelf,” the column that helps Ukrainians and EU residents to learn more about Ukraine.

The author recounts the formation of the Right Sector organisation, the birth of the Ukrainian volunteer movement, the outbreak of hostilities, the large-scale Russian strikes of 2014 and the further course of the war. The online presentation was conducted by the British-Ukrainian Aid Organization and the Association of Ukrainians in Great Britain.

“I see this book as a source for future historians – so they know what we wore, what we ate, what we laughed at,” says Olena, a former Marine officer, sniper, former fighter of the Ukrainian Volunteer Army and Right Sector, and a direct participant in combat operations in Donbas. The publication contains about 600 pages and 400 photos; the main characters are fighters of the separate light infantry Wolf unit of the Ukrainian Volunteer Army. 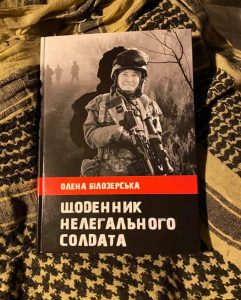 Ms. Bilozerska is both a witness to and participant in the turbulent early years of the war with Russia. Before the war, she worked as a journalist and human rights activist. During the Yanukovych era, she was persecuted as an opposition journalist, her flat was searched, and criminal cases were opened. Later, Olena was an active participant in the Maidan events. She participated in the war in eastern Ukraine, first as a volunteer and then as an officer in the Armed Forces of Ukraine after completing officer training in Kyiv.

The documentary book by Olena Bilozerska was shortlisted for this year’s Taras Shevchenko National Prize. “Diary of an Illegal Soldier” is a unique example of a book in the genre of war journalism, where the daily subjective experience of the author-warrior is combined with the objectivity of the facts documented by her and testimonies of other participants in the events, professionalism of presentation, breadth of coverage, and most importantly the principled and balanced position of a direct participant and a careful observer in one person”, wrote Maya Harbuzyuk, a member of Shevchenko Award Committee.

At a video presentation in London, Ms. Bilozerska noted that the mission of volunteering for the war in Ukraine is to give the army a motivational boost, and this was particularly important in 2014-15. She advises all Ukrainian participants in the war to hold on and not to be disappointed. According to her, some soldiers are discouraged and need to be supported.

The book is written in Ukrainian. Olena says that she dreams of having it translated into English, but it is difficult to arrange, as she cannot afford to pay for the translation of 600 pages. The author hopes that perhaps the translation can be done on a volunteer basis.