ECHR Accepts Complaint from Father of Soldier Killed in Donbas

A father of a 22-year-old deceased Ukrainian defender, Yevhen Kornienko, is seeking justice at the European Court of Human Rights (ECHR). Anatoliy Kornienko proved in national courts that the Russian Federation is to blame for his son’s death, and now the 63-year-old Dnipro resident has filed a complaint with the ECHR. 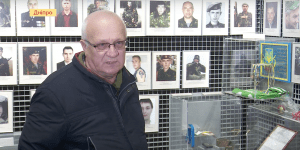 Anatoliy’s son was killed in a mortar attack near Vuhlehirsk in 2014. Yevhen managed to serve in the combat zone for several months before his last battle. After three months of bereavement, his father went to serve in the Armed Forces of Ukraine and spent five years in the 25th brigade. He did not abandon his desire to complete the case and carefully collected evidence and proof that Russia’s aggression was to blame for the death of his child. It took him a year, during which his son’s comrades and public organisations helped him a lot. The evidence gathered was enough to win the case at the Industrial District Court of Dnipro after three years of consideration.

“However, Ukraine’s court ruling on the death of a serviceman as a result of Russia’s aggression against Ukraine is not enough to demand moral compensation from the Russian Federation,” lawyer for the Sich Human Rights Group Maryna Kiptila explained.

Therefore, the next step was to appeal to the Strasbourg Court with the requirement to recognise a violation of Article 2 (right to life) and Article 13 (right to an effective remedy) of the Convention for the Protection of Human Rights and Fundamental Freedoms.

Maryna Kiptila notes that the ECHR’s practice of considering complaints of violation of Article 2 of the Convention in the context of armed conflict has many aspects. In such cases, the court often did not accept applications from the complainants, as it was about the death of servicemen, not civilians, while defending the sovereignty and territorial integrity of Ukraine.

“So, since it was a soldier, not a civilian, who died, we had to work hard to justify the violations. My colleague from the Ukrainian Helsinki Human Rights Union Vitaliia Lebid helped me a lot in this. The result was positive: the European Court accepted the application. We consider this a small victory for the father who has every chance of winning the case in the European Court,” lawyer Maryna Kiptila said.

This is one of the thousands of tragic stories taking place in Ukraine over Russia‘s armed attack and killing of our defenders. But each story that has a positive continuation becomes another cornerstone of the protection of the rights of Ukrainians, who prove the aggressor’s involvement in the murders of thousands of Ukrainians in eastern Ukraine. It is also a way to restore historical justice and moral satisfaction through receiving compensation from the aggressor.