Executive Director of Meduza: Foreign Agent Status Is “Like a Yellow Star” 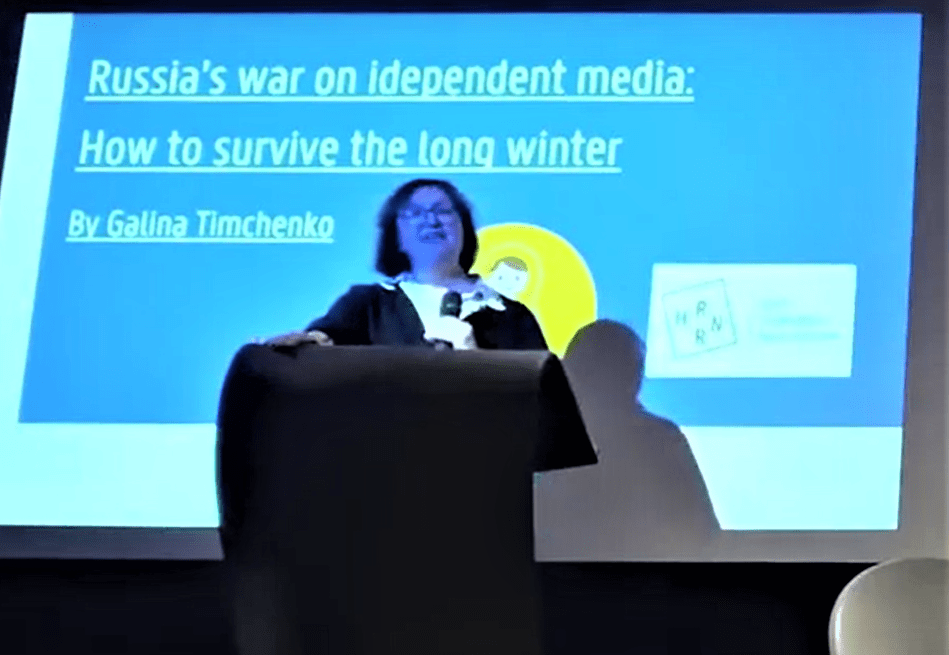 Being labeled by Russia as a foreign agent is a stigma and discrimination, said Galina Timchenko, founder and executive director of the online site Meduza. During a lecture at Ghent University, she spoke on restrictions on independent journalists imposed by the Kremlin.

“Already, many years in a row, Russia is labeled as a country lacking press freedom and internet freedom,” said professor Dirk Voorhoof from Ghent University at the beginning of the lecture. He reminded the audience, according to the press freedom index 2021 by Reporters without Borders, Russia is in 150th place out of 180 countries. The state of press freedom there is comparable with other countries that have similar positions in the list, such as Pakistan, Turkey, Belarus, Libya, Azerbaijan, Iraq, Syria, Saudi Arabia, Iran, China and, at the very bottom of the list, Turkmenistan, North Korea and Eritrea. “This indication by Reporters without Borders is a clear illustration of the difficult situation for independent journalism in Russia,” said Voorhoof.

One of the bright examples of attacks on independent journalists is a case with Meduza, a Russian- and English-language online newspaper based in Latvia. On 23 April, this site was labeled as a foreign agent. What does it mean for work and existence of the newspaper? Galina Timchenko explains, “It is media working under full control and in interest of hostile countries. Nobody explained what they meant by hostile countries, where is the list of these enemies? So, it is a stigma, and it is discrimination. First, and the most visible part we must do, we must label all pieces of our content on every platform with disgusting 24 words printed in a font size 2, in two sizes bigger than our usual font… We must put these 24 words in the caps lock before every piece of content at every platform: Twitter, YouTube, desktop version, mobile version, application, any social media, even Telegram messenger. We have to print these 24 words: this content was made by an organisation who is a playing role as a foreign agent…. The words are obligatory and mandatory. I compare them with the ‘yellow star’.”

According to Galina, the newspaper lost its sources of information and was obliged to establish a special entity inside Russia.  “Every single month we have to send reports to the minister of justice about all the money spending and all our revenue. We are a Latvian company, for God’s sake. Why should I send financial reports to the Russian minister of justice? It’s absolute and insane.” Mrs. Timchenko underlined that after being named as a foreign agent, Meduza lost journalists and part of their audience. The very existence of the news site came under threat.  “We were the first commercial private media that was labeled as a foreign agent. We were not the very first; the very first were Radio Liberty and Voice of America. But these media are funded and financed by the government of the United States; and we are a private company and we get revenues from advertising, so we lost advertisers… But what did we hear from Russian officials? Nothing happened, said press secretary of ministry of foreign affairs Maria Zakharova: oh, they lost their advertisers; let’s ask advertisers. Maybe they are not happy with the level of their quality? And I answered, ‘you are a liar because for six and a half years all advertisers were happy, and after the 23 of April when they labeled us as a foreign agent, 90 % of these advertisers just turned out.”

The executive director of Meduza said that now this black list of foreign agents consists of 77 names and brands including not just media but NGOs and people. “If you were labeled as a foreign agent as a person…you have to report to the Ministry of Justice about everything, from a cup of coffee to your medicine, from taxi to books you read. You have to fill in 84 pages every three months to report to the Ministry of Justice,. So, the Russian minister of justice knows for sure what tea you prefer, what taxi you prefer, what medicine you prefer and what restaurants you prefer. They know everything about you,” said Galina.

She describes the current situation with Russian media as a long winter, as the war against freedom of speech and against activists started 20 years ago after Putin was elected as president. Mrs. Timchenko reminded that at first Putin smashed the major independent TV channel NTV and began to take control over major TV channels and newspapers. “The main idea was that Russia is a shiny fortress in the circle of enemies. The Kremlin administration, Vladislav Surkov who was in charge of in a political situation, invented a thesis about special democracy inside Russia, not Western democracy but our special democracy, our special way of life and way of rule,” emphasised Galina.

She stressed several turning points in this regard. The first one was in 2011, when huge street protests took place in Moscow and other big cities after the falsified State Duma elections. The second one was in 2012, when huge peaceful protests in Moscow after the presidential election were “brutally stopped by police. Hundreds of people were beaten, tortured, put behind bars.” And the third turning point happened last year when Aleksey Navalny was poisoned, and “investigative reporters proved that he was poisoned by a chemical weapon and it was made under direct order of Kremlin.”

“It was one trigger; the second trigger was protests in Belarus. Putin and the Kremlin administration saw these tens of thousands of people who were protesting against these fake election results that allowed Lukashenka to rule forever. . And, in 2020, we had local regional but very wide protests in the Far East when the Kremlin decided to replace the elected governor with their guy. In Russian North, there were so-called garbage riots. All these situations – regional protests, Navalny and his team and his organisation, the Belarus scenario – pushed the Kremlin to launch the biggest major attack we have ever seen in 20 years. I call it real war. Maybe hybrid war, but for the very first time in Russian modern history, the total media industry is now under such pressure that I can say that the main goal is total destruction of independent media, independent journalists and the whole media industry,” stated Mrs. Timchenko.

She named some of the tools in this war. There are so-called sleeping laws from 2014 when Russia started annexation of Crimea and war with Ukraine. “For example, a law about protecting kids from bad information. So, if you are Russian journalist you have no right to write about suicide, about bad news and you have to mark all the content with an 18 plus label on the main page of your medium because it could contain information that could disturb kids. So, it’s anti-LGBT propaganda law. We have no right to write that LGBT people have the same rights as other people. So, it the so-called Yarovaya package of laws, it is the so-called anti-extremist package of laws; we count more than 90 restricting laws and orders for media and for foreign agent media. All these laws were like sleeping laws and the Kremlin used them from time to time against the enemies. The first foreign agent was NGO Memorial. It is the organisation telling the truth about Stalin’s repression and communist terror. So, they were the first NGO that was labeled as a foreign agent. Then there were some amendments to this law, and now to be labeled as a foreign agent you have to have just two conditions. You have to receive money from abroad. It can be a birthday present from your grandma from Baltic states, and you have to publish something on any social media. You should not be a journalist to be proclaimed as a foreign agent. It is enough to write something on your social media and to receive even one euro from abroad; they could label you as a foreign agent.”

Galina said that the black list of foreign agents can be expanded every week:  “Every Friday, the Security Council of Russia has its official meeting. So, every Friday the dragon is flying away from his cave searching for new victims. Now, we have 77 media foreign agents and more than 200 foreign agents among persons and NGOs. There are almost 300 foreign agents inside Russia working in the interests of hostile countries. Why do I call this situation of war? There is no way out from the black list, there is no procedure, there is no court who could expel you from this black list, your life changes forever… Now they are destroying the whole media industry. For example, you are a journalist and you want to write some piece or article for any media. This medium should label this content with these mandatory words as well. Because a journalist who wrote this piece of content is a foreign agent, so they should proclaim and they should print it before the article. So, neither the Kremlin nor Putin want independent media to exist.”

But Meduza does not give up. “When we lost almost everything, we said openly to our readers: guys, we have nothing but you, please help us. And now 100,000 people are our donors. They donated money to lose them, and we want some time to survive and to rethink how we could do our job in such circumstances. The main problem is that Russian civil society and Russian media are separate from each other,” said Galina. She pointed out that the minister of justice who is responsible for the black list has no obligation to explain or even to prove the basis for being labeled as a foreign agent: “They just put you into the black lis. That’s all, they have no obligation to explain their decisions.” She thinks that in such a situation, with no weapon to fight, Meduza can only resist, and the most effective strategy for the online newspaper is multi-platform broadcasting. It means that they have to broadcast from every possible platform:  Facebook, TikTok, Telegram channel, What’s Up group, and they have to use email newsletters, mobile applications, mobile versions, etc. Now, Meduza is broadcasting from 12 platforms.

The executive director of Meduza does not see any prospects, does not think that the situation will become better. “I just do not want to tell you this sweet lie. We have no hope, but it is not the reason to stop on our job. We have a job to be done, and we will follow our obligations as journalists, as people who are standing by for freedom of speech and expressions. So, we will continue, but we have too many restrictions, too many discrimination, too many fines. For example, if I miss this label, the first time fine for Meduza  would be 64,000 euros. After two fines, they will open a criminal case against me, and it is up to two years in prison for me personally… Now, we feel that we are inside a trap… 10 years ago there were some rules in this game, for example, you were independent media, and if you wrote very balanced and very informative content, you were more or less okay. Now, there is no rule, you have no clue what could lead you to the fine or fines or imprisonment or a criminal case or any of these consequences.”