Russian propagandists, through their “speaking heads” in the temporarily occupied territories of Donbas, are spreading fake news in order to discredit the Armed Forces of Ukraine.

“In particular, on May 16, Yakiv Osadchy, the so-called “official representative of the people’s militia” ORDLO issued an official statement in which he unfoundedly accused Ukrainian servicemen of allegedly raping Jennifer T. Blatty, an American journalist and a Polaris photojournalist. According to him, Jennifer arrived in the Joint Forces Operation zone on May 10, 2020 in order to “enhance the image of servicemen and the prestige of military service in the Armed Forces in the eyes of the public of NATO countries”. The crime against her was allegedly committed by National Guard soldiers in the village of Voytovo (Novoaidarsky district, Luhansk region). Osadchy also claimed that in order to avoid responsibility for the “rape” of an American journalist, NMU fighters planned to kill Jennifer Blatty and the driver who accompanied her, blaming their deaths on mortar fire,” said Valentyna Bykova, an analyst and media expert at International Center for Countering Russian Propaganda.

The expert analyzes: This fake news special propagandists of the Russian Federation mounted on the patterns of the widely known since 2014 fake news about the “crucified boy” in Slovyansk. Also in the fake news from the so-called, “people’s milicia” of the ORLO has certain analogies with the case of National Guard of Ukraine fighter Vitaliy Markiv, who was unjustly convicted in Italy for alleged involvement in the death of Italian photojournalist Andrea Rockelli during a mortar attack.

The fake story about the “American journalist” who was allegedly raped by the Ukrainian military was widely shared in the Russian-language media. This information was reprinted by hundreds of sites in Russia and in the territories temporarily occupied by Russia. 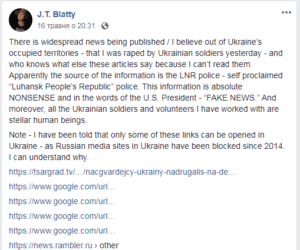 Soon Jennifer Blatty herself announced on her Facebook page that she had not been in Joint Forces Operation zone for a long time, and the news of the so-called “people’s milicia” of the self-proclaimed “LPR” is fake news.

“Russian media have been blocked in Ukraine since 2014. And I can understand why,” said the photojournalist.

In addition to discrediting Ukrainian Armed Forces fighters, this fake had another purpose: to bring discord between Ukraine and the United States, to weaken Ukraine’s support for American society, and thus to question military cooperation.