Head of Promote Ukraine Marta Barandiy: I Have No Doubts About European Future of Ukraine 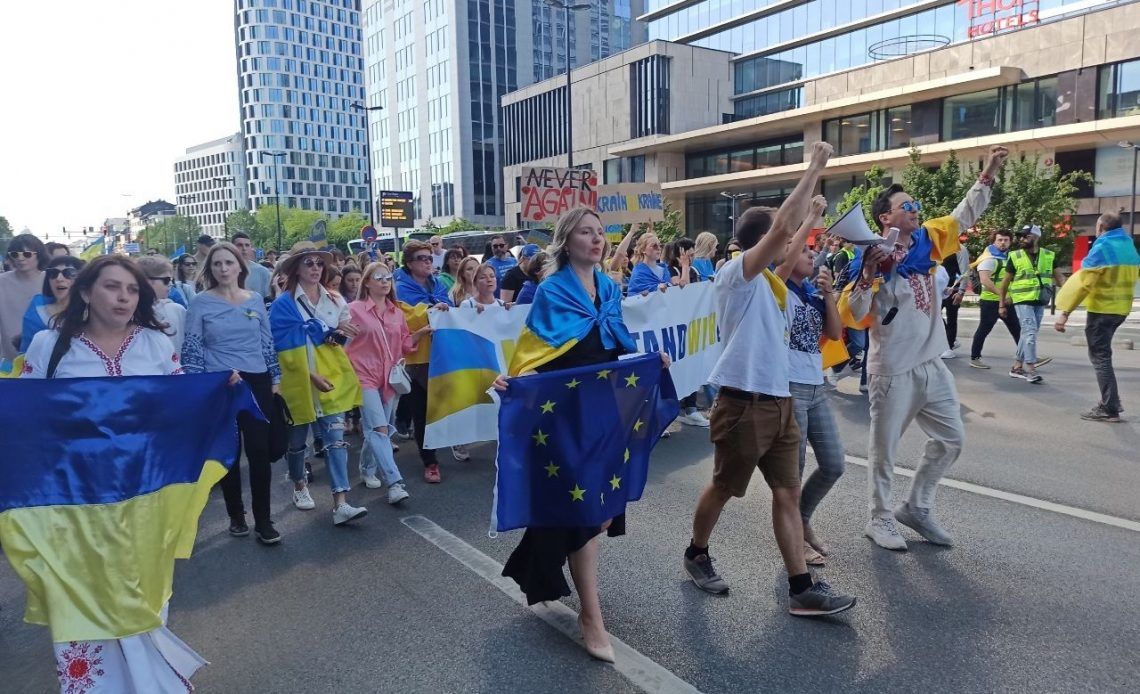 Russia’s war against Ukraine has become a challenge that has united Ukrainians not only in the country but also around the world. Hundreds of Ukrainian public organisations and volunteer groups abroad are doing everything possible to help our Armed Forces and bring victory over the aggressor closer.

We met with Marta BARANDIY, the founder of the Belgian NGO Promote Ukraine, in the European Quarter of Brussels, in a spacious office provided by the Stakeholders when they learned that Ukrainian volunteers needed space. Marta was busy preparing for the March of Solidarity with Ukraine. That’s where we started our conversation.

Q: Marta, please tell us more about your event.

A: It so happened that several dates coincided in these May days. On 9 May, European countries celebrate Europe Day; on this day in 2014 our organisation Promote Ukraine was registered. So, we decided that our action on 8 May – a march in support of Ukraine and a concert in Luxembourg Square near the European Parliament – would be a good opportunity to remind people about Ukraine, what is happening there now, and the values defended by Ukrainians. Ukrainian and Belgian performers took part in the concert. The concert was the finale of our event, and it all started with a march from Rogier Square to Luxembourg Square, during which Belgian politicians addressed the participants. In particular, they were Benoit Lutgen, the MEP from Belgium, and member of the Belgian Parliament Georges Dallemagne, thanks to which, by the way, Belgium voted in favour of providing weapons to Ukraine. Both politicians personally travelled to Ukraine to hand over humanitarian aid.

Q: In order for the war in Ukraine to end with our victory, international support and attention are extremely important. However, for the third month in a row, it is difficult to keep the events in Ukraine at the highest level of public interest in other countries, despite the horrors of the war. Do you feel tired of Europeans from the war in Ukraine?

A: It is probably too early to talk about fatigue, although it has gradually begun to manifest itself. We have noticed that fewer and fewer people come to our demonstrations and rallies. At first it was easy for us to involve two or even 5,000 participants in our protests. Now, gathering so many people is a problem. Not even Ukrainian refugees come to the rallies. When we invite journalists, they ask us how many participants we expect. And we tell them that there will be 200 people, the media do not even want to cover such actions.

The same trend is observed with humanitarian aid – it is also becoming less and less efficient. People are already donating less money, because all those who wanted to transfer to help Ukraine have already done so and cannot transfer funds constantly. There is also some information fatigue. It is unfortunate to say this, but at first the news from Ukraine shocked people, yet gradually they became accustomed to the emotions caused by the war. In addition, many Ukrainians came to Belgium, the Belgians communicate with them, live next to them and begin to take this whole situation for granted.

Q: How did the war affect the activities of Promote Ukraine?

A: When Russia struck the first missile strikes on Ukraine on the morning of 24 February, Ukrainian activists in Brussels began to correspond with each other in messengers, trying to find answers to dozens of questions. We quickly realised that it was impossible to solve everything through messengers and we needed to meet in person to share information and communicate effectively. We started looking for premises, wrote letters everywhere, and in the first week we were approached by the owners and management of the building in which you and I are now. They offered us this rather spacious room.

When we gathered here with the volunteers, we realised that not everyone is familiar with each other. So, at first everything was chaotic, everyone took on many different tasks, of which there were many. However, in these two months, we have become a real family. Since 24 February, our team has multiplied. Currently, more than 100 volunteers are involved in the activities of Promote Ukraine, 35 of them work on a permanent basis.

Q: And what exactly does Promote Ukraine do?

Q: We have formed several working groups. One of the main ones is the one responsible for humanitarian aid. We receive requests from Ukraine, mainly for protective equipment for our military. We work on these requests, conduct fundraising campaigns, cooperate with various partners who transfer money to us, then look for the necessary equipment throughout Europe. When we find it, we organise logistics, and from us it goes to all the hot spots of Ukraine. Our defenders always send us videos, confirming that they received everything.

Another huge area is our refugees. About 45,000 Ukrainian refugees are officially registered in Belgium to date, although many are already returning to Ukraine. To help our compatriots adapt and enable socialisation, we opened the Ukrainian Cultural Center, where you can practice vocals, dance, learn French and Dutch. Our volunteers work in the center. We organise free lunches for Ukrainian refugees, where they can get to know each other. We are negotiating with several Brussels schools to organise Ukrainian language training for our children on their basis. We have also opened three warehouses where refugees can pick up the necessary clothes or other necessary things. We store cargo there, which we later send to Ukraine.

Promote Ukraine also takes care of the media. We communicate mainly with Belgian journalists, but we are also approached by correspondents from other countries on various issues. They not only take comments from our volunteers, but also ask us to find the right people or experts in Ukraine, and we help them with that.

Q: Now, it seems, the whole European politicum is open for Ukraine. Do you manage to meet party leaders and politicians working in Brussels?

Q: This is another area of our activity – advocacy: communication with Belgian and other European politicians, ambassadors of different countries to the EU about their position on Ukraine. We recently visited the Permanent Mission of Hungary to the EU and plan to hold a meeting at the Delegation of Germany in the near future. We convey to European diplomats the position of Ukrainian civil society. And today it coincides in almost everything with the position of the President and the Ukrainian government. However, due to the fact that we are representatives of civil society, we can communicate more sharply and openly than the official representatives of Ukraine. For example, in the Hungarian Mission, we openly said that Budapest takes a pro-Russian position, which, incidentally, offended the Hungarian ambassador. Our representative to the EU cannot say that, but we can and must do so. Today, the Ukrainian government and civil society complement each other. Although in reality the role of civil society is to control and criticise the government. But today we are united, because we are talking about the survival of Ukraine.

Q: Since the beginning of the war in Ukraine, Promote Ukraine has organised more than one action. I remember the picket of the Russian embassy in Belgium and the action near the National Opera in Brussels, where activists lit candles with a large sign “Children” to draw an analogy with the Russian-bombed drama theater in Mariupol, which killed about 600 civilians.

A: The organisation of demonstrations is a significant area of our activity. During this full-scale war, we held 35 of them. Now, we are holding a series of “Boycott Lukoil” demonstrations. Every Sunday, our activists standwith posters near gas stations and explain to drivers that Russia is at war with Ukraine, and you are refueling at a Russian gas station.

Q: And how do drivers react to this?

A: Differently. But many people, after talking to our activists, leave the gas station and say that they will no longer refuel at Lukoil. We noticed that many drivers do not know that this network of gas stations is Russian. And we ask Belgian journalists to write more about this and inform their audience that Lukoil is a Russian oil company. And in Belgium there are now almost 180 gas stations of this company. In the near future, we plan to hold a large-scale demonstration near Lukoil’s headquarters in Belgium. It has already been agreed with the police.

Q: Many in Ukraine are concerned about the statements of some European leaders that there can be no special accelerated procedure for our country’s accession to the EU. How do you feel about Ukraine’s European perspective?

A: “There should be no doubt that Ukraine is almost in the EU. The leader of the European Commission and the President of the European Parliament state this openly. Many in Brussels sincerely support Ukraine and are ready to do more for it than for any other country. That is why I have no doubts about the European future of Ukraine. However, there is fear that we will be pushed to certain compromises instead. It can look like this: we are giving you the status of a candidate for membership, and you a little bit give up here, give up a little there. Although I have no reason to say it, I am intuitive. For example, I am told that European firms began to actively hire Russians. And response to the protest of Ukrainian employees is that it is not necessary to show militancy and that it is necessary to be inclusive and to not talk about politics in the office, but only after work. So, I fear that such rolling back may occur at the political level. Therefore, we need to be prepared that the fight for Ukrainian interests will become more difficult, in particular for civil society.”

Zaporizhzhia. The terrible terrorist attack of russia against Ukrainians