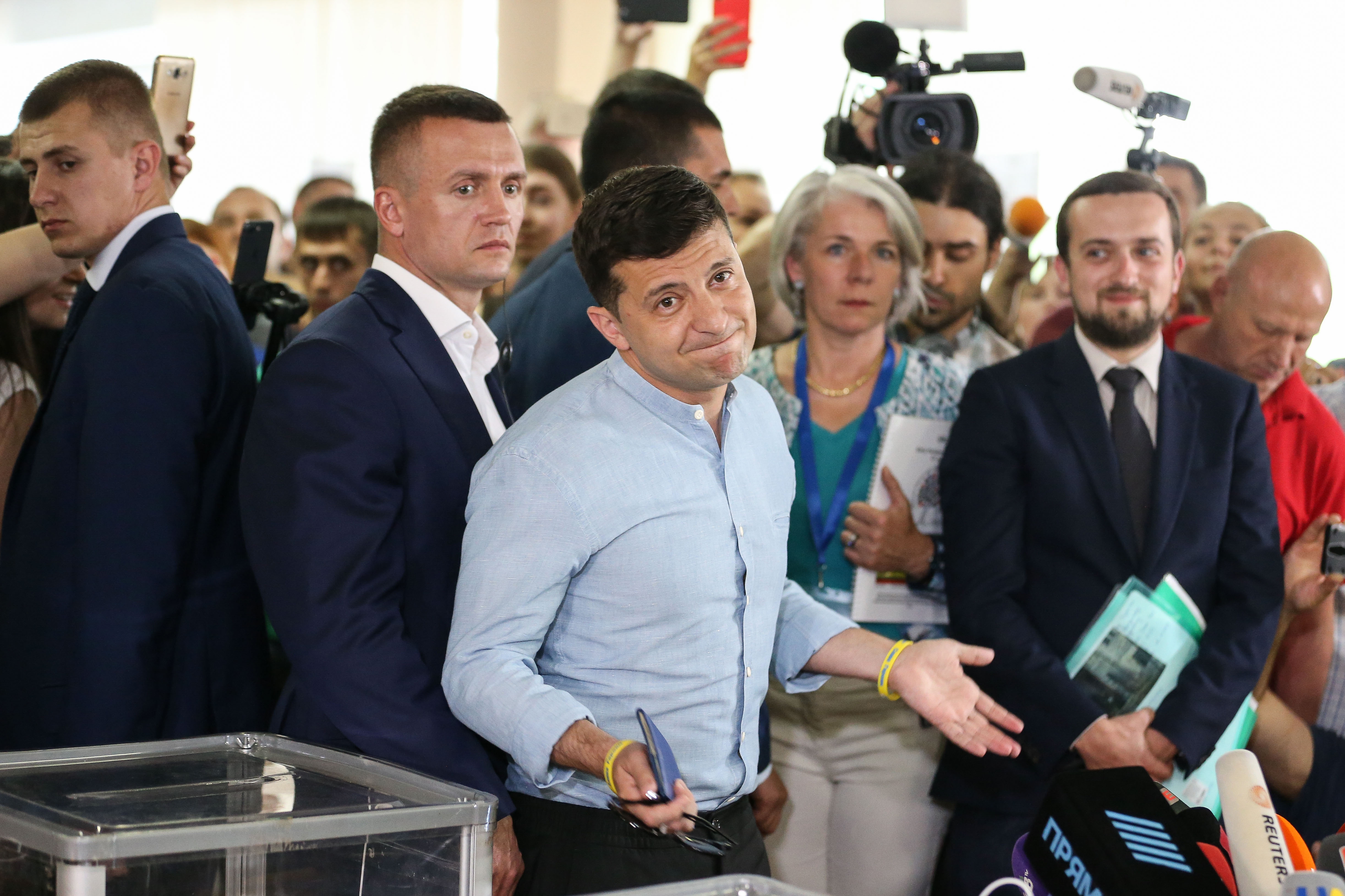 Both in presidential and parliamentary elections Ukraine has chosen the European path once again. Nevertheless, the danger of Ukraine falling back under Putin’s influence still exists and has even been exacerbated by the results of the vote.

Parliamentary elections in Ukraine this Sunday produced an unexpected outcome. For the first time in the country’s history, a single political party achieved an absolute majority in the parliament, the Verkhovna Rada. Consequently, the party Sluha narodu (Servant of the People), allied with the President of Ukraine Volodymyr Zelensky, will be able to form a government by its own, not needing any coalition partner.

However, another important outcome has been lost behind this historic event. The second place has been claimed by a party Opposition Platform – For Life (OPFL), which is being usually branded just as a pro-Russian one. It is correct, but there is a deeper significance to is, because this party is a vehicle for a new strategy of Russian President Vladimir Putin to bring Ukraine under his control.

A marriage of convenience

Different EU countries only in recent years became targets of Russian efforts to gain influence over their policies. This month it became known that Italian prosecutors opened an investigation into claims that a far-right party Lega sought to obtain financing from Russia via an oil scheme. It was just the latest example of allegations that Moscow tries to fund political parties, mostly right-wing ones, to influence the course of EU countries.

In Ukraine a similar plot goes on for much longer, starting as late as 2004. Then Russian spin doctors tried to help Viktor Yanukovych to win the presidential election 2004. Due to the first Maidan, or the so-called Orange Revolution, he lost. But Yanukovych and his Party of Regions remained a vehicle for Russian influence. This party was Putin’s partner in a marriage of convenience rather than his proxy because it made its own decisions and was relying on resources of Ukrainian oligarchs.

Conducting Russian-friendly rhetoric, the Party of Regions received support of mostly pro-Russian voters. Moscow helped it, maintaining good relations with Yanukovych and the Party of Regions. In return, Ukraine under their rule conducted foreign policy predominantly in line with Putin’s wishes.

After the second Maidan in 2013-14, or Revolution of Dignity, Russia occupied and annexed Crimea and started a war in the Eastern Ukraine. At the same time, the vehicle of its interests inside Ukraine remained the same, Opposition Bloc, a successor to the Party of Regions.

It did not really fly though, and in 2018 it became clear that Putin started changing his strategy. The Opposition Bloc was not united, consisting of different factions, allied with different groups of oligarchs that had their own interests and agenda which just coincided in certain issues with those of Putin. So, instead of relying on Ukrainian partners of convenience, he started creating his own proxy.

Grey eminence steps into a spotlight

The new strategy relies on a single person, Viktor Medvedchuk, a Ukrainian lawyer, politician, businessman. After Maidan, he has been called the last Ukrainian whom President of Russia trusts. The main reason for this is their personal connection. In 2004 President of Russia became a godfather to Medvedchuk’s daughter. And Medvedchuk himself makes no secret out of the fact that he meets Putin often.

For several years after the 2013-14 Maidan, Medvedchuk was largely absent out of the front stage of Ukrainian politics. In 2018 he staged a comeback. First, he acquired a political party that is now called OPFL. Officially he chairs a political council there. Then he lured into his party Yuriy Boyko, at that time a co-chair of the Opposition Bloc. Important was that Boyko had already been the most popular among pro-Russian politicians in Ukraine. On a parallel track, Medvedchuk acquired through his associates three TV-channels in Ukraine, which are relatively new, but quite influential when it comes to news.

While the Party of Regions relied on financial resources of its oligarchs, Medvedchuk’s case is apparently more similar to those in the EU countries. Although the OPFL is connected to Ukrainian big businessmen, a journalist investigation found out that Medvedchuk’s wife owns a company that drills oil in Russia. It is well-known that oil and gas business is one of the most profitable activities in Russia, access to which lies ultimately in the hands of one person. This person is Putin.

The OPFL is open about its pro-Russian orientation. Medvedchuk and Boyko visited Russia three times during the presidential and parliamentary campaigns, meeting there with Prime Minister Dmitriy Medvedev and top management of Russian gas monopoly Gazprom. What the OPFL has been promising to Ukrainians was the decrease of gas prices which is an extremely politicized and sensitive issue in the country.

The second selling point of the OPFL is peace. In its electoral manifesto, the party promised to end the fighting in the Donbas, the region in the Eastern Ukraine. The means stated are providing Donbas with the autonomous status and conducting negotiations with the separatists there and with Moscow. And here is where Putin’s allies get vague. There are no indications of what price would Ukraine have to pay to Russia to be granted the peace. The OPFL just indicates a desire to conduct a ‘multivectoral’ foreign policy and a revision of Ukraine’s participation in the free-trade area with the EU.

Most probably that would mean not only stop of the European and Euro-Atlantic integration and hence the end of reforms Ukraine committed itself to, but also introducing constitutional mechanisms to prevent the country to move closer to the EU and NATO.

For the moment, Ukraine is far from such possibility of losing its sovereignty. Although the OPFL finished second in the parliamentary election, it got only 13% of the votes cast. It is incomparable to 43% of Zelensky’s Servant of the People. Having just a bit more than 40 members of parliament out of 424, Medvedchuk won’t be able to influence policies of Ukraine. In this respect, Ukraine slipped once again through Putin’s fingers.

However, there are worrying tendencies to it. On July 21 the OPFL received more than the Opposition Bloc in 2014 both in absolute and relative terms (it was 9.5%). And it received a bigger share of votes than Boyko did in March (11.5%). At that time Boyko trailed behind Petro Poroshenko, then President of Ukraine, and former Prime Minister Yulia Tymoshenko.

This time the OPFL has beaten parties of both of them. And while Zelensky will probably start losing some of his current phenomenal popularity, Medvedchuk’s party will do its best to present itself as his main opponent. It will be doing this by trying to revive the East-West division that was constructed by Russian spin doctors and the Party of Regions in 2004.

The other three parliamentary groups have mostly shown feeble results in the Eastern and Southern regions of Ukraine, so they won’t be able to fill in the vacuum of power, should it emerge there, if Zelensky fails. In other words, the new President of Ukraine has no right to fail.

On the other hand, Ukraine provides an underestimated case for the EU countries of how Putin tries to win influence over their democracies because his adherents usually get an upper hand when those in power in their countries fail. The way it happened, for example, in Italy, where Lega of Matteo Salvini, who has never tried to hide his sympathies to Putin, is currently by far the most popular party.

Ukraine’s Foreign Minister: We Support Navalny As He Is Putin’s Enemy