In the Dark. How Do CADLR Residents Survive? 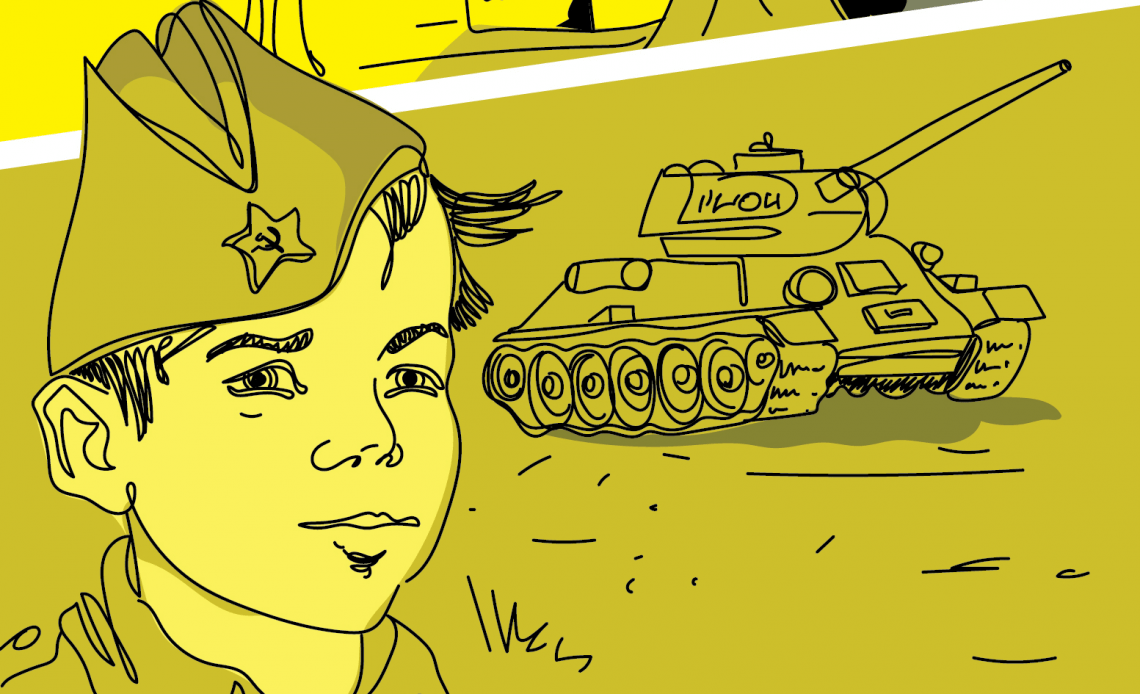 The occupied Donbas is a sort of a time machine. Since 2014, the region has rolled back either to Soviet times or the early 1990s. On the one hand, it sees reprisals, censorship, intimidation through controlled media, pathetic paraphernalia, children in pioneer ties; on the other is mass unemployment, the shutdown of factories and mines, wage arrears, and rampant crime. Curfews in Donetsk and Luhansk were lifted only this June. At the same time, conscription into the “army” was announced. Until now, the service in the ranks of the so-called militia was voluntary. Now, the locals will be drafted, although the leaders of the militants promise that recruits will not be sent to the front. Few believe it.

It is difficult to find out the real state of affairs in CADLR [certain areas of the Donetsk and Luhansk regions]: all local media are engaged in propaganda, local public pages often disseminate fakes and panic sentiments. People living under the occupation are very reluctant to talk about their lives, especially to Ukrainian journalists. However, we managed to communicate with a few locals.

Alevtyna, 55, Donetsk: “I was born and live in the Donetsk region. I tried to leave the city several times when the war started. But my mother and I have two apartments that need to be taken care of. Otherwise, they will be taken away or looted. Mom is 86 years old. She drew a pension in Ukraine but did not go there for the last two years, so the money probably is still on her account. She also receives a pension from the ‘DPR’.” Housing is one of the most important arguments for people who have decided to stay in the self-proclaimed republics. According to online sites, a two-room apartment in Donetsk now costs $12,000-16,000, the prices in Luhansk are roughly the same. In Dnipro, a similar flat is twice or thrice as expensive.

Today it is difficult to name the exact number of people living in the occupied Donbas. According to a study conducted in October 2017 by the Delovaya Stolitsa media outlet, jointly with the Centre for Russian Studies, from 2.6 million to 3.7 million people live in CADLR (before the war, 3.9 million people lived in the two regions). The region’s demographics definitely changed. On the one hand, many people left their homes due to hostilities and moved deep into Ukraine or chose Russia as their place of refuge. At the same time, various functionaries, military personnel, and “volunteers” who had come to fight for the “LPR-DPR” moved from the Russian Federation to the occupied Donbas. Alevtyna says: “Many new men have appeared. There are new families in the yards, children. They speak Russian, but not the way we are accustomed to. There are some new holidays, which are rather scary. Some strung-up people walk, they shout something, put forward some slogans.”

Varvara from Luhansk, 47: “Luhansk has always been a rather orthodox city for me, a city where changes do not happen often, and radical changes happen even less often. But even judging by our street, a lot of changes happened and we’ve got used to that. The neighbours opposite finally sold their house because they do not plan to return here from Kyiv where they have lived for the past seven years. This means that we will have new neighbours who, like us, do not plan radical life changes, only changing their homes, considering that their state is a “republic” – a strange geographical dimension, which the whole world takes in quotation marks. Then, to our right, a neighbour from Tyumen, where she has lived for the past seven years, arrived for the summer. For her, Luhansk is a city where she spends her holidays. Next to her is another neighbour who returned to her parents from Lviv for the summer. She often uses Ukrainian words, but our street as well as the city as a whole has a tolerant attitude. Such is life. ‘Our Lviv guest’ will take parcels from us to deliver to relatives in Ukraine. When you see this geography of the new cities of your recent neighbours, you wonder why this war is waged. Almost every family has children who have gone all over the world but they return to their old parents’ houses, speak a mixed Ukrainian and Russian, compare the prices for a new life, and together raise glasses for a meeting and a common childhood on our old and quiet street.”

Against the background of relative calm on the front, the pandemic and healthcare became the main topic both in the occupied Donbas and the rest of Ukraine. Anton from Khartsyzsk: “What scares me the most now is the risk of contracting COVID-19. And also a pension, which I have not received in Ukraine since 2016.”

Alevtyna: “We have a problem with healthcare. Authorities brag about free treatment for those who live in Ukraine, but, in fact, they do not treat even locals. A neighbour went to Kirovohrad for surgery. It seems that this city is now called something different [Kropyvnytskyi]. Many had the coronavirus, but doctors diagnosed ‘pneumonia’ and performed no tests.”

The dire healthcare situation is something that human rights activists who monitor the situation in Donbas constantly draw attention to.

There are no objective statistics on the COVID-19 rate in CADLR. Locals receive exclusively Russian Sputnik vaccine jabs. At the end of July, the Russian Federation delivered Sputnik Life, a type of vaccine that is not recommended for people aged 60 and over, to the occupied Donbas. Moreover, the pandemic led to the closure of entry-exit checkpoints. Under the pretext of the pandemic, the militants effectively blocked residents of the occupied territories from entering Kyiv-controlled territory. The only option for residents of self-proclaimed republics is to enter Ukraine through Russian territory (through the Ukraine-controlled border area).

Reasons for entry are: return to the place of residence of Ukrainians and members of their families, family reunification, serious illness, death of close relatives, need for medicines and medical devices or treatment for serious and/or chronic diseases, departure from the temporarily occupied territory for permanent or temporary residence in another country or need to arrive there to inherit property, entry of parents with children under 16 to draw up identity documents and proof of citizenship of Ukraine for children, as well as entry of entrants to pass external, independent tests.

When the checkpoints were open, there was a lively movement: many elderly people went to the controlled area to receive pensions, on “shopping tours” to buy goods that are scarce in the “republics,” to meet with relatives, or undergo treatment. This “border movement” gave rise to many new “professions” such as people selling queue positions, people carrying goods through checkpoints (dividing luggage by the number of kilograms allowed by militants), people providing currency exchange or withdrawing money from Ukrainian bank cards. All this simple business ceased to exist with the closure of checkpoints, so it became even harder for the occupied Donbas inhabitants to survive.

The assets of local pensioners, “militia members,” and employees of occupation administrations can be called relatively stable. These so-called state employees receive small (several hundred dollars’ worth) but guaranteed payments, which in turn are possible, thanks to subsidies provided by Russia to support CADLR. As for the rest of the working population, the situation is uncertain, if not critical. Most industries are either shut down or operate intermittently and therefore have significant wage arrears. Anton from Khartsyzsk describes the situation in the city as follows: “The wage arrears at the rope factory today totals RUB 400 million [UAH 144 million]. Khartsyzsk pipe works, which once employed 4,000 residents of our town, belonged to Rinat Akhmetov before the war and has not worked for two years. Its workers massively left for Russia to find a job at similar enterprises.”

Mass closure of enterprises results in social collapse. As Denys Kazansky, a well-known Ukrainian blogger and journalist, highlighted in his investigation, mines are flooded in the town of Krasnyi Luch (named Khrustalny after de-Sovietisation), which meant complete de-industrialisation and, consequently, a mass exodus of the population that has already halved since the war. Occasionally, spontaneous strikes break out at dying enterprises: workers demand payment of wages. So, in recent years, protests have erupted in Antratsyt, Krasnodon (now Sorokine – ed.), Alchevsk, and other towns. The occupation authorities react differently to the strikes: either disperse the protesters by force as in Krasnodon, or allocate funds from Russian subsidies at a critical moment.

Document management is another source of major concern for the residents of the occupied Donbas. Some locals may have three passports: Ukrainian (since pre-war times), of a “citizen” of “DPR” or “LPR”, as well as Russian, which is strongly encouraged here. According to the National Security and Defence Council of Ukraine, Russia already has issued 630,000 passports in Donbas. Elections to the Russian State Duma took place in September, in which CADLR residents also took part. However, not everyone is in a hurry to become Russian citizens: the so-called state employees are forced to do so in the first place. Those who live outside this system avoid this “passportisation.” Alevtyna: “We are not interested in politics. Maybe we will manage to live peacefully somehow, although poorly, of course. We did not receive Russian passports. My mother only received a ‘passport’ of ‘DPR.’ But the Ukrainian one was not taken away. My boss at work does not require [that I get Russian or ‘DPR’ passport], and I do not look for it.”

Passports are not the only problem. Varvara from Luhansk says: “One of the most discussed topics in the city is the requirement to obtain new ‘republican’ driver’s licenses. Old Ukrainian plastic certificates will be fined from 26 December. And this is a dilemma: to get a new certificate almost without problems in the ‘republic’ or to go to Ukraine to resolve the issue there. It is said that the new Ukrainian certificates will be valid after 26 December. But it may be a rumour.” Anton from Khartsyzsk says that having a car with Ukrainian license plates in his town is simply risky, and it is better to put the “republican” plate.

The residents of Donbas, with whom we managed to communicate, mainly touch upon social issues, saying little about security. They think little about prospects and talk about them even less often. Alevtyna from Donetsk: “At first, life in the city was unbearable: there were some gangs, people and cars were kidnapped and stolen, some bacchanalia… Now everything is like in the USSR: party meetings, recently some kind of joint physical exercises were arranged in a park. I’m not interested in that… I read news about Ukraine on the Internet, and here they are trying to instil hatred with some noise. But people believe in that. I do not believe, but I find it hard to imagine that we will ever become one country. People are tired of all this. It seems to me that it was easier in the 1990s. Now the time has stopped and that’s it. We won’t be able to change anything, and young people have to leave.”