Bellingcat Investigation Team helped identify three Russians involved in war crimes and torture in the Izolyatsia prison, which is controlled by militants of the so-called “DPR” and is located in occupied Donetsk. 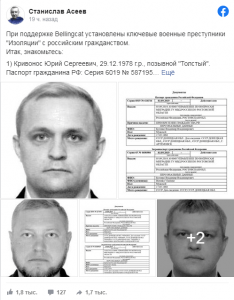 “Now, having the data of their Russian passports, it is possible to officially lodge claims against the Russian Federation over violation of laws and customs of war, which, I hope, will be done in the near future by both the Trilateral Contact Group and our [Ukraine’s] Foreign Ministry,” Aseyev wrote.

He noted that information about the chief of these three executioners, nicknamed “Lenin,” would be published soon.

“For 28 months, I heard you beating women in neighbouring cells, forcing them to sing songs under torture, and dragging people with electric burns into cell, where they still have to ‘hold the wailing wall.’ It was very funny to all of you. Now, we will laugh,” the journalist added.

Izolyatsia is a notorious secret prison of militants in Donetsk city subordinated to the so-called “Ministry of State Security of the Donetsk People’s Republic.” It was created in June 2014, after the militants seized the site of the IZOLYATSIA Arts Foundation equipped in the territory of an old factory.

According to media reports, prisoners may sit in Izolyatsia for years without trial or investigation. The detainees are subjected to torture. At the same time, a significant part of the detainees are Russian citizens and even former “DPR” militants.