Master of the Instruments that Were Played in Ukraine Ages Ago 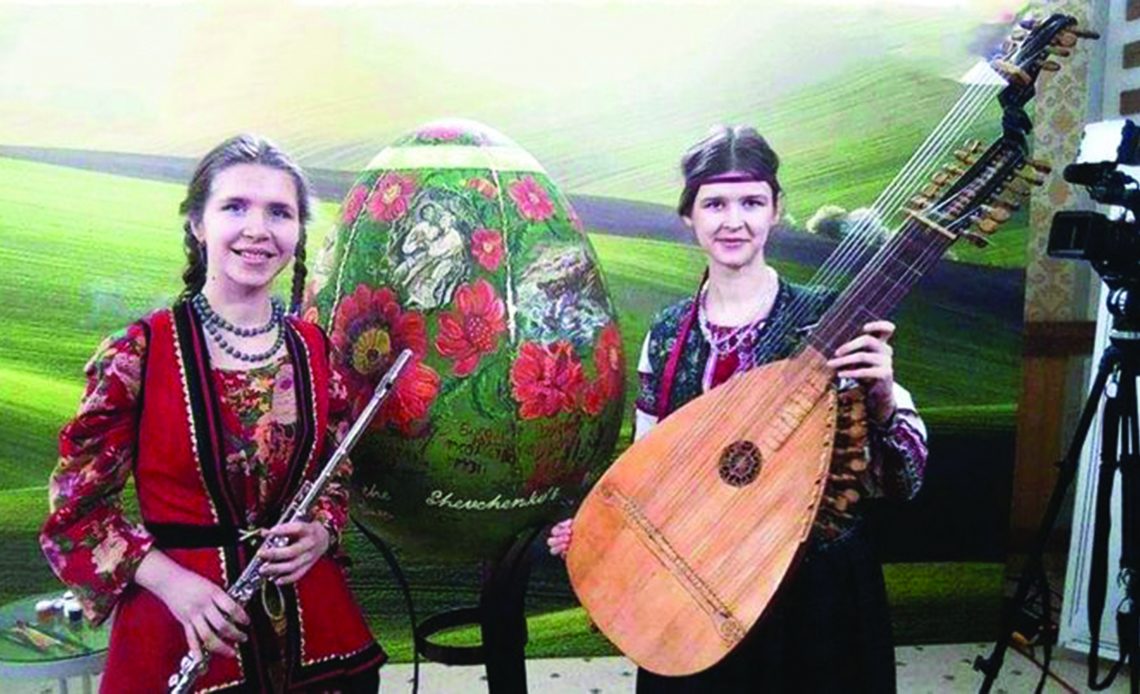 To revive and popularise authentic Ukrainian musical instruments – this is the challenge Vadym Viksnin has set himself. This Kyiv master makes hurdy-gurdies, kobzas, tsymbaly, banduras, but he may be prouder of reviving such a forgotten instrument as a torban. Also, the artist’s daughter Maria is the only person in the world who plays a torban in a classical style.

The Viksnin family, as well as Shevchenko (on his mother’s side), were musicians, and Vadym’s father and uncle were well-known violin makers in the Soviet Union, while his great-grandfather, and grandparents were musicians… The master has spent a lifetime repairing, restoring and making classical musical instruments, and for the last 13 years, antique ones. The majority of modern Ukrainians cannot tell the difference between a torban, a lute and a kobza. Meanwhile, even if great-great-grandparents of contemporary inhabitants of Ukraine did not play these instruments, at least they knew what a kobza or torban looked like. 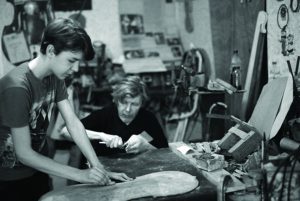 Before the revolution of 1917 in Ukraine, there were professional musicians who played the bandura, hurdy-gurdy, torban and kobza. Inexplicably, all these people are now often called “kobzars.” Also, some Ukrainian authentic instruments are attributed to Moscow: for example, the table gusli was very popular in Ukraine, and children learnt to play them at parochial schools. The Donskoy Ryley is also of non-Russian origin; it is a Ukrainian lyre, otherwise relya because this instrument has two strings “D” (re) and one “A” (la). Registered Cossacks loved this lyre. When the institution of Cossacks began to be destroyed and Cossacks went to the Don, they took their favourite relya with them.

The torban was also highly respected in Ukraine. For example, more than 100 years ago, one magazine announced a competition for the best story, and the prize for the winner was a three-month course on the torban. Hetmans Razumovsky and Doroshenko played the torban. We can see their instruments in museums in Vienna and Dresden. Several virtuoso players on the torban have left their mark on history. They are three generations of Widorts from Austria, who have lived in Ukraine since the late 18th century: Gregor, his son Kajetan and grandson Franz. A famous Ukrainian musician in the 19th century was Timko Padura – whom the Soviet authorities considered a mythical torban performer. However, the reality of his existence is proved at least by the fact that Vadym Viksnin found at Vernadsky National Library of Ukraine an edition of Padura’s sheet music, published in Lviv in the mid-19th century. According to Vadym, it is now accepted in Russia that Padura did exist, but they say he wrote everything for the piano, not for the torban. Another Ukrainian torban and lute player, singer and composer Timofiy Bilohradsky – once world-famous in the 18th century – was considered a Russian musician: apparently, because he worked in the St. Petersburg court singing chapel. According to some sources, Johann Sebastian Bach attended one of Bilohradsky’s concerts, and he was so delighted with the performance of the Ukrainian player that he wrote six lute suites especially for him.

“The modern generation knows about the torban only what Mykola Lysenko (Ukrainian composer in the 19th-20th centuries – ed.) wrote in an article about the last torban performer from the dynasty of Widort. Before him, the torban was held like a lute, and Widort played the torban like a German zither with the instrument lying on his lap and two hands playing from above. It is a very interesting school, which was more widespread in Russia than in Ukraine. But there it was destroyed, along with the torban, after the conflict between Hetman Mazepa and Peter the Great,” says Vadym.

Over the years of Ukraine’s independence, interest in authentic musical instruments has increased, but not significantly. At music schools, children learn how to play the Chernihiv bandura, which Mr. Viksnin calls Stalinka. It was under Stalin when this musical instrument was invented for Ukraine, but it has nothing to do with the authentic Ukrainian bandura. And today even professional musicians on classical instruments are a little ashamed by the Ukrainian kobza, lute or torban. It is remarkable that the Russian Ministry of Culture, on its own initiative, contacted Mr. Viksnin and offered him more than 20 grants to produce musical instruments. At the same time, the Ukrainian Ministry of Culture did not respond at all to the master’s requests for the funding of various projects.

The Viksnins: before and now 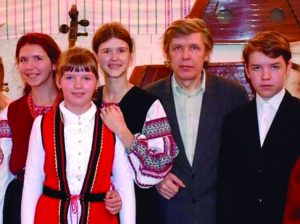 Vadym Viksnin belongs to the fourth and his children to the fifth generation of musicians, respectively. His maternal great-grandfather Kindrat Shevchenko, together with his grandmother, grandfather and grandmother’s brother, created a bandura quartet and travelled all over Ukraine with concerts. In the 1930s, grandmother Maria Shevchenko and grandfather Hryhoriy Pidhorny went to work in Russia.

Why? In Ukraine, in those days, artists were allowed to give 10 concerts a month maximum, while in Russia, 21 concerts a month minimum. See the difference? And Shevchenko’s bandura players worked intensively: they could do two or three concerts a day. They travelled all over the Soviet Union with their performances. During the Second World War, grandfather was taken to the front. He came back, but with a girlfriend, that was his comrade-in-arms. Grandmother stayed in Vladivostok with her little daughter (Vadym’s mother). Later she met a bandura player from Poltava (Mykola Yavdochenko), whom she married after the war. The bandura duo Shevchenko and Yavdochenko worked hard. During the war, they gave concerts at the front-line and in hospitals, and in peacetime, they worked in Kazakhstan where many ethnic Ukrainians live. “They were called the duo of Taras and Odarka there,” smiles Vadym. – I don’t know why exactly those names. I have this photo: two trucks with the sides thrown back were placed next to each other, so it became a scene. The photo was taken from the performers’ back, and you can see the steppe and the crowd to the skyline in front of them. They always sang the Ukrainian repertoire, with the audience particularly looking forward to a performance of “Dumy” by Taras Shevchenko. Later, the grandparents moved to live in Chelyabinsk – for the trivial reason that the local philharmonic gave them a flat.”

Vadym’s paternal great-grandfather, the Baltic German Richard Frank, was a violin maker and violinist who, by a twist of fate, ended up in northern Russia. Vadym’s father Roman and uncle Robert also made violins and were renowned throughout the Soviet Union. Vadym Viksnin, for his part, graduated from the Tchaikovsky South Ural State Institute of Arts and from courses at the Steinway & Sony factory as a piano tuner. He is a member of the National All-Ukrainian Music Union, the Association of Master Artists of Bowed Instruments of Ukraine. Mr .Viksnin has changed several professions. He was a teacher of percussion instruments, a piano tuner. He even worked for a while in a furniture factory. After the collapse of the USSR, Vadym moved with his parents from the very industrial city of Chelyabinsk to their native Ukraine – first to Zaporizhzhia and then to Kyiv, where he has been living with his family for many years. Now, he works as a restorer of musical instruments at the Museum of Theatre, Music and Film Art of Ukraine, which is located on the territory of Kyiv-Pechersk Lavra. Vadym has been repairing and restoring musical instruments since his school years, but his interest in authentic instruments emerged after he moved to Ukraine. The master restores and makes various musical instruments, but his greatest love with a torban. Among other things, he has made an exact copy of one of Hetman Ivan Mazepa’s torbans.

Vadym is married to the artist Oksana Viksnina (Bondarenko). She is a laureate of international and all-Ukrainian arts and crafts competitions. The spouses have five children, and all of them have something to do with music.

The elder daughter Tatiana graduated from the Maimonid Academy of Music in Moscow, where she took a violin class. Daughter Maria graduated from the music school and Kyiv National University of Culture and Arts, class of Professor Esipko as a torban performer. Daughter Daryna graduated in flute from the music school and the Interregional Jewellery Art Centre. Son Svyatoslav is studying to become a master woodworker at a technical school. Perhaps he will also become a music craftsman. The youngest daughter, 14-year-old Anastasia, plays the oboe. As the daughter Maria is the most dedicated to music, there is a separate chapter about her.

There are several people in the world who play the torban in the style Lysenko wrote – roughly like a bandura. Maria first picked up a torban at the age of 10 when she attended music school as a bandura player. Her first songs were from a collection of Ukrainian folk songs that belonged to her great-grandmother. The girl’s first torban was diatonic and was well suited for playing folk songs. With this torban, Maria took part in a concert by the American harp guitarist John Doan. Then, her father made a chromatic torban, which is suitable for playing classical repertoire.

As a schoolgirl Maria participated at the Borys Lyatoshynsky Classical Music Ensemble, performing the music of Handel, and she played the part of two Vivaldi theorbos simultaneously on the torban. There was a striking case: the girl played on the torban the part for the lute from the oratorio of the Kyiv composer Oleksandr Kostin, who was delighted with such a performance of his composition. During her time at university, she had the opportunity to study in the summer lute courses by Evangelina Mascardi in Italy, by Anton Birula and Anna Kowalska in Warsaw and by Siegfried Andreae in Berlin. Maria is now studying for her master’s degree at the Berlin University of the Arts. Her professor Sam Chapman is very keen on classical Ukrainian culture, especially the torban and Renaissance kobza.

Who buys a bandura, kobza or torban nowadays?

There is little demand for authentic musical instruments in Ukraine, says Viksnin. Recently, the Kyiv Operetta Theatre approached him and ordered a hurdy-gurdy for its performances. The Lviv interactive museum of musical instruments has asked for recordings of torban playing. Among the private customers are residents of different countries. Kobzas were ordered by musicians from Ukraine and Australia, cymbals from France and the USA. Many requests for hurdy-gurdies have come from Germany, the USA, Brazil and Ireland. “People are interested in what more specific instruments sound like. Because Ukrainian lyres differ from Western ones, so not only ethnic Ukrainians buy lyres, just like cymbals,” says Vadym.

Can we expect demand to increase if an average Ukrainian does not know the difference between a torban and a lute or a kobza, and if the state is in no hurry to help the master in reviving folk instruments? But there is hope. Mr. Viksnin says that usually, when his children, eager to popularise folk instruments, play them at Mamayeva Sloboda (recreated Cossack village) or at the Open-Air Museum in Pyrohiv, their viewers call a torban a bandura at best. But one day, Vadym’s daughters went to play at “Montmartre of Kyiv” – Andriyivskyy Descent: Daryna on the flute and Maria on the torban. A young family with a girl of seven or eight, all wearing Ukrainian vyshyvanka’s (embroidered shirts), walked past. Having seen Viksnin’s duо, the child shouted: “Look, it’s a torban!” The story struck a chord with Vadym. “The new generation already knows that there was a torban, that it was a Ukrainian instrument, knows how it sounded. It is worth a lot,” the music-maker is sure.