Our diplomats and experts conducted a real historical investigation in Germany to find and honour Ukrainian soldiers killed during World War II. It was Ukrainian students who discovered the first historical finds. Promote Ukraine tells about the course of archeological excavations.

This is the story of Ukrainians, Ivan Pasternak and his family, among others. On 8 June 1941, Ivan turned 33 years old. Before joining the army, he worked as a tailor. On 22 June 1941, the Third Reich attacked the USSR, and the entire territory of Ukraine was covered by the gloom of World War II. Ivan was mobilised, taken prisoner, and later sent to Germany. His family did not know anything. They lost touch with him and knew nothing about his fate. Like hundreds of thousands of other families, they received a brief notice after the war: “Gone missing.” Dmytro Kuleba, Minister of Foreign Affairs of Ukraine, wrote about this story.

In 2021, preparations for industrial construction began in one of the districts of Bremen city, northern Germany. The construction site was to be located in the territory of a former World War II cemetery covered with sand. Locals called those burials of Soviet prisoners of war and forced labourers the “Russian cemetery”.

Ukrainian diplomats at the Consulate General of Ukraine in Hamburg found out about the construction plans.

“Of course, we understood that the cemetery was not ‘Russian’ but Soviet and that Ukrainians could be among the Soviet prisoners of war and forced labourers. Our diplomats, together with local activists, appealed to local authorities and stressed the importance of researching this place and honouring all the victims for Ukraine. We achieved the halt of construction and conducted a thorough historical study, revealing the sensation,” the minister said.

After the war, the U.S. military documented 772 burials at the cemetery. But in 1947-1948, only 456 were reburied. Later, excavations were stopped for unknown reasons, and the cemetery was covered with a two-metre layer of sand. More than 300 burials were forgotten and not honoured properly. 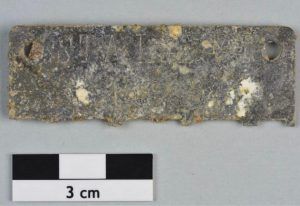 Thanks to the work of diplomats, the Bremen authorities announced the launch of large-scale archaeological excavations. Works began in August 2021. The diplomats organised a trip of five students of the Faculty of History of the Taras Shevchenko National University of Kyiv under the leadership of Candidate of Historical Sciences Tetiana Pastushenko. Between 15 and 29 August, they took part in the excavations. It was Ukrainian students who discovered the first finds (separate bones, soldier’s licence plates).

“We addressed the researchers at the National Museum of the History of Ukraine in the Second World War to find his relatives. The searches yielded results in December. We found Ivan’s family in Lviv: his daughter Maria and three grandchildren, Vasyl, Lydia, and Halyna. To say they were shocked is to say nothing. Well, we did our job, restored memory and justice. In addition to Ivan Pasternak, we found two other Ukrainian soldiers: Serhiy Selyk (Zelyk), a native of the Kyiv region, born in 1921, and Mykola Kovalchuk, born in 1915 in the Volyn region. We had already managed to find Serhiy’s relatives by joint efforts with the museum, and we are still looking for Mykola’s relatives,” Kuleba said.

Unidentified remains are still being excavated, so we could learn about more discoveries. Excavations will continue until March 2022.

Why is this critically important?

The Ministry of Foreign Affairs of Ukraine believes that this story is important for several reasons. First, we give Ukraine back to Ukraine, restoring our history and our memory. Second, we overturn public opinion in Germany and break the Russian myth that everything “Soviet” is “Russian” and, consequently, all misinterpretations of Russians as the only “victims” of Nazi Germany, to whom there is a “special responsibility.”

The diplomats strongly believe that Ukraine will properly commemorate Ukrainians and other prisoners of war whose remains could be found during excavations. We will continue to demand that their sacrifice be adequately recognised and honoured internationally.

The minister expressed special gratitude for the cooperation to Mayor of Bremen Dr. Andreas Bovenschulte, the Faculty of History of the Taras Shevchenko National University of Kyiv, the National Museum of the History of Ukraine in the Second World War, and the colleagues from the Consulate General of Ukraine in Hamburg.