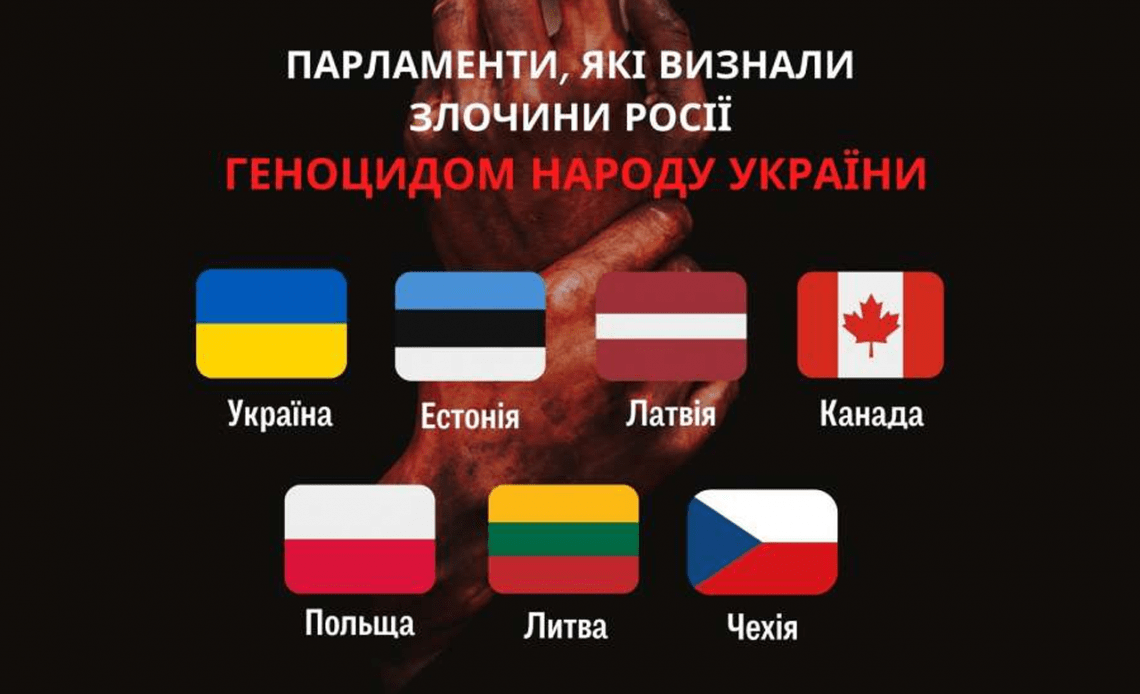 Apart from Ukraine, the parliaments of Estonia, Latvia, Canada, Poland, Lithuania, and the Czech Republic recognised Russia’s war crimes as genocide against the Ukrainian people.

“I sincerely believe that the number of states that stand in solidarity with this decision will only grow. Recognition of Russia’s crimes as the genocide against the Ukrainian people is, first of all, respect for the memory of thousands of innocent Ukrainians killed, including children,” Speaker of the Verkhovna Rada of Ukraine Ruslan Stefanchuk said and thanked the parliamentarians of other countries for their support.

He added that Russia must be held accountable for war crimes.

Also this week, a legal analysis by the New Lines Institute for Strategy and Policy (USA) and the Raoul Wallenberg Centre for Human Rights (Canada) was published.

The document entitled “An Independent Legal Analysis of the Russian Federation’s Breaches of the Genocide Convention in Ukraine and the Duty to Prevent” was signed by more than 30 well-known humanitarian law specialists, including those who worked in international tribunals for genocide.

“This report is the first to address one of the more contentious and consequential questions of Russia’s invasion of Ukraine: whether the war is genocidal in character… This report reasonably concludes that Russia bears State responsibility for breaches of Article II and Article III (c) of the Genocide Convention to which it is bound. The report also concludes that there exists undoubtedly a very serious risk of genocide, triggering States’ duty to prevent under Article I of the Genocide Convention,” stated Dr. Azeem Ibrahim, Special Initiatives Director at the New Lines Institute for Strategy and Policy.

The accusation against the Russian Federation is supported by a large list of evidence, including examples of mass killings of civilians, forced deportations, and dehumanising anti-Ukrainian rhetoric.

The report directly points to Moscow, accusing Russian top officials and commentators in the state media of inciting genocide and laying the groundwork for future genocide, with repeated denials of the Ukrainian identity.