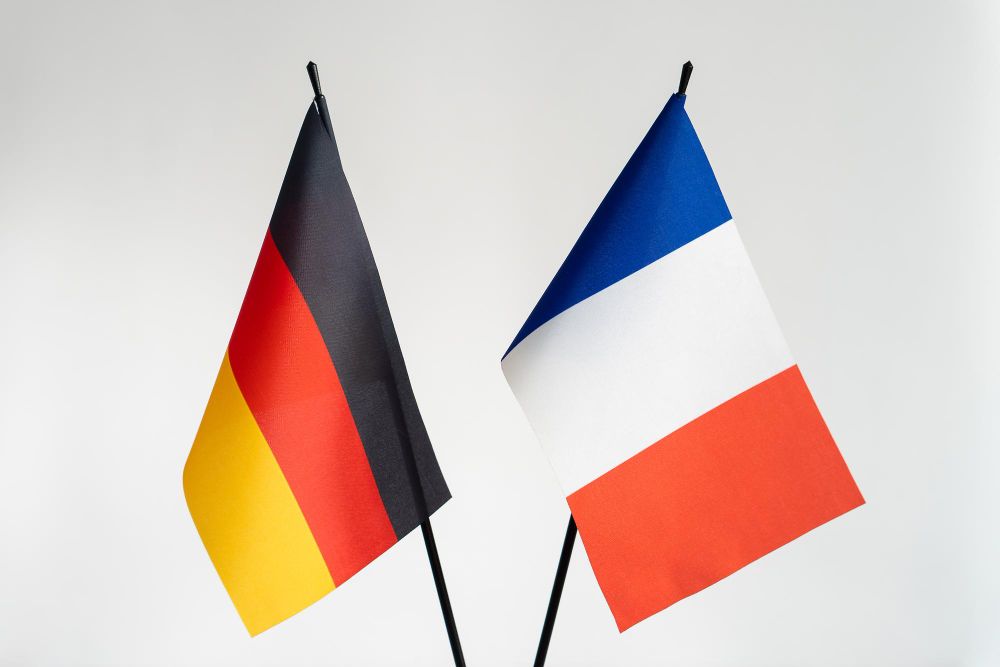 On April 4, the foreign ministries of Germany and France issued a joint statement on the escalation of the conflict in eastern Ukraine, causing a wave of outrage.

In particular, the joint statement of the Foreign Ministries of the two countries states: “France and Germany are concerned by the growing number of ceasefire violations in eastern Ukraine, which come after the situation had stabilised since July 2020. We are closely monitoring the situation and, in particular, Russian troop movements, and call on all sides to show restraint and to work towards the immediate de-escalation of tensions.”

Outrage was caused by the fact that Berlin and Paris called on “all parties” to de-escalate at a time when the aggressor country – Russia – is withdrawing its troops to the border with Ukraine.

Daniel Szeligowski, Head of Eastern Europe Program at Polish Institute of International Affairs, reacted to the Foreign Ministry’s statement on Twitter as follows: “Sometimes it is better not to issue any statement at all.” 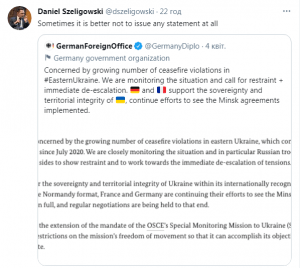 Roland Freudenstein, Policy Director of the Wilfried Martens Centre for European Studies, wrote: “#US POTUS pledges support for #Ukraine in face of #Russia aggression. @GermanyDiplo and #France can’t even bring themselves to call out Russia and instead call for ‘restraint and de-escalation.” 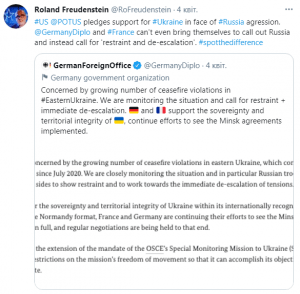 German MEP Viola von Cramon: “C‘on you know better who is responsible for the increase of deaths &military tensions during the last weeks. You’d better make sure they are called by their names instead of calling on ‘all sides.’ That statement is everything BUT helpful, plays only in Putin‘s hands.” 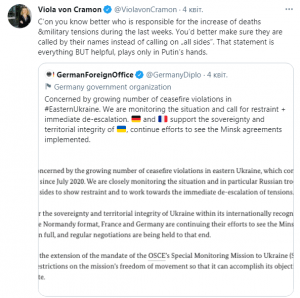 Bild journalist Julian Ropke said, “#BREAKING Germany and France noticed ‘Russian troop movements’ and therefore call on BOTH PARTIES to ‘immediately deescalate.’ Ashamed of our @GermanyDiplo and sorry for this insanity from our government.” 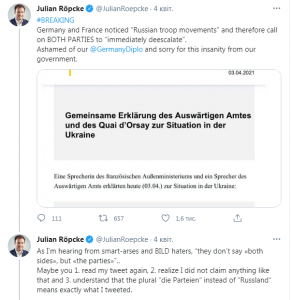 Businessman, writer, and political commentator Paul Niland: “Diplomacy is complicated, there’s rules about how things can and cannot be said. But calling for ‘all sides’ to de-escalate is incredibly misleading, and unhelpful for understanding what’s actually going on. 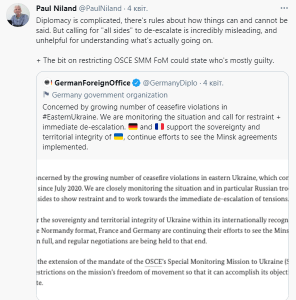 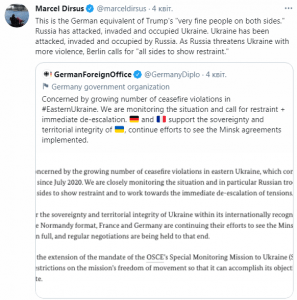 Independent political analyst Ariana Gic: “No surprise. Germany pressured Ukraine to let Crimea go when Russia first invaded in 2014, and essentially handcuffed the country from properly exercising its lawful right to defence. I don’t care what anyone pretends, DE’s message is clear: Ukraine, don’t defend yourself.” 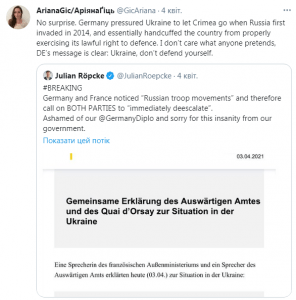 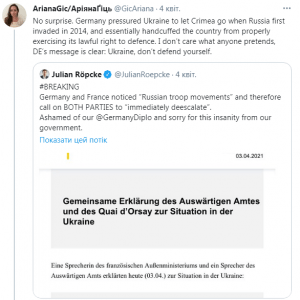 Senior Fellow at Atlantic Council Jakub Kalenský wrote, “Dear @GermanyDiplo – this is akin to calling upon Poland in 1939 to deescalate. There is only one aggressor in Ukraine and if you do not know that, please, find a different job ASAP before your incompetence and/or cowardice enables Putin to murder more innocent people.” 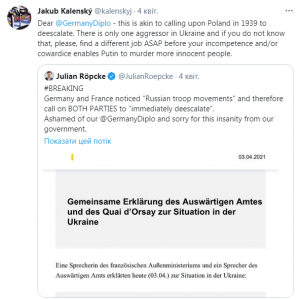 As a reminder, on March 30, commander-in-chief of the Armed Forces of Ukraine Ruslan Khomchak stated during a speech in the Verkhovna Rada that Russia is moving troops to the border with Ukraine and it poses a threat to military security. Later, Biden and Zelensky had a telephone conversation. Foreign Minister Dmytro Kuleba discussed Russia’s escalation with foreign counterparts, including US Secretary of State Antony Blinken, OSCE Secretary General Helga Schmid, Canadian Foreign Minister Mark Garno, and German counterpart Heiko Maas.