The Ukrainian Icon Presented to Lavrov Left Donbas via Moscow 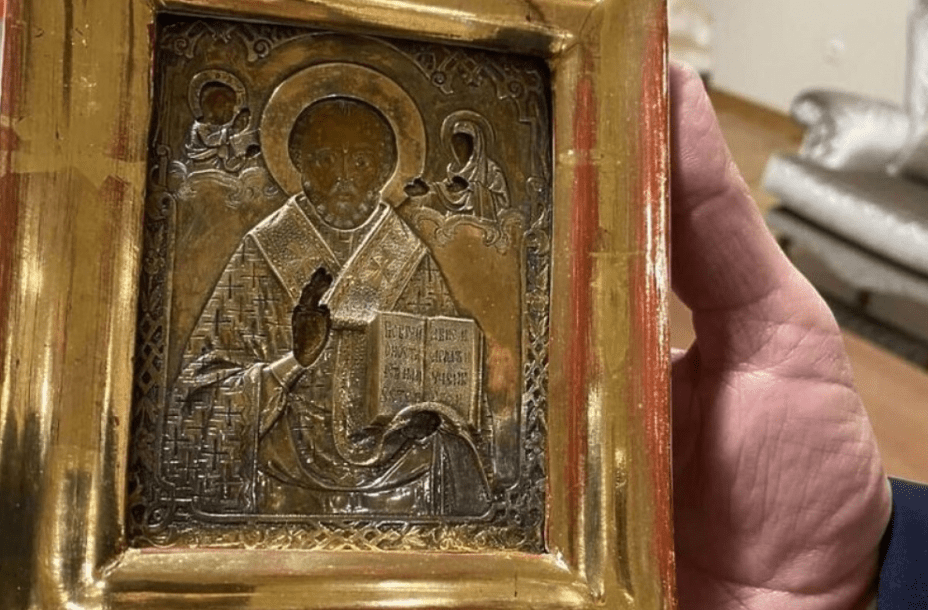 The Ukrainian icon, which was presented to Sergey Lavrov, the foreign minister of the Russian Federation, by the Chairman of the Bosnia and Herzegovina Milorad Dodik, was taken out of Donbas in 2018 via Russia and Serbia.

Mass media reported this referring to Dragan Savic, the former head of the Association of Military Veterans of the Republic of Serbia.

He stated that on 29 May 2018, the icon was presented by Dusko Vukotic, the head of the Association of Military Veterans, to Dodik, the President of the Republic of Serbia at that time.

“Vukotic brought the icon from Donbas via Russia and Belgrade,” Savic said.

At the same time, he clarified that he did not know whether Vukotic had any accompanying documents. According to Savic, Vukotic went to Donbas in 2018 as the Association of RS Military Veterans head to participate in a meeting of the “Victory Heirs,” the organisation that acted pro-actively in the occupied Crimea and Donbas.

Allegedly, the representatives of the self-proclaimed republics’ occupying “power” presented the icon of St. Nicholas to Vukotic after that it was given to Dodik. So, the statement from Dodik’s representatives, that his family from Banja Luka had been keeping possession of the relic for the last 15 years was refuted. Savic said that “it was all lies and fraud.”

Vukotic himself refused to comment on the scandal, saying that “Interpol was working on the case.”

The icon has now been transported from Moscow to Sarajevo and handed over directly to Dodik’s associates on 25 December.

The day before, Ukraine’s ambassador to Croatia, Bosnia and Herzegovina, Vasyl Kyrylych, said the icon, presented to Lavrov, should be returned to Ukraine, and the embassy insisted on providing information by “official Sarajevo” as soon as possible on how the relic had entered the country.

“The lack of response or delay with it give grounds to consider the icon’s moving to the territory of Bosnia and Herzegovina illicit. This question is fundamental, and the answer must be quick and unambiguous. Not via media, but official,” Kyrylych stressed.

Until the Bosnian embassy receives an answer from the Bosnian side, the Prosecutor’s Office of Bosnia and Herzegovina is investigating it as a criminal case.