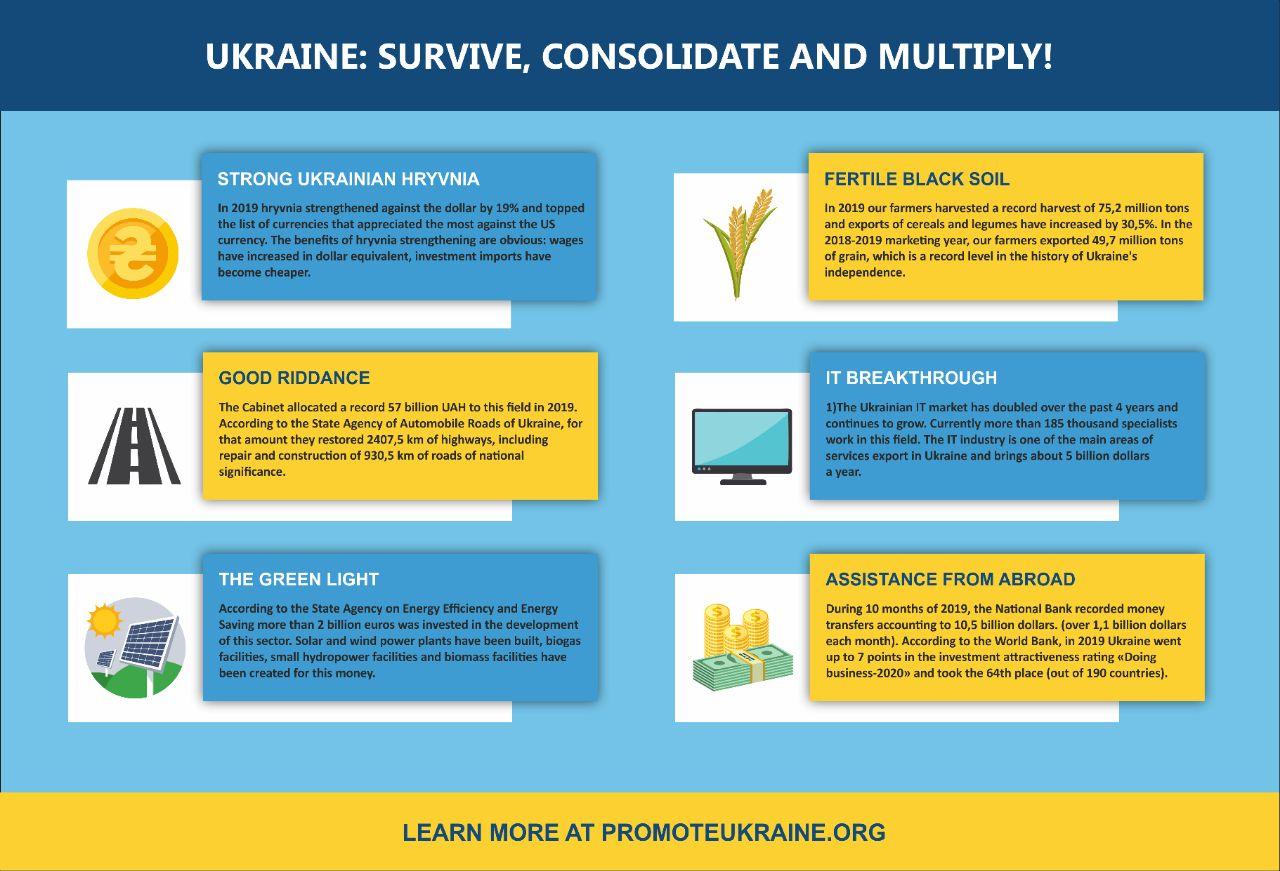 Ukraine: managed to survive, now there is a need to consolidate and multiply the achievements

In 2014, our state experienced an extremely profound crisis: change of government, the annexation of the Crimea by the Kremlin, the war of Russia in the east of Ukraine, economic decline due to the loss of Donbas coal mines, factories and plants, break-in business connections and an almost empty treasury.

The Russian propaganda machine affirmed that Ukraine would freeze without Russian gas, its economy would finally collapse and the state would cease its existence.

However, it never happened, and in recent years the situation in the economic and socio-political life of the country started to improve significantly. Ukraine managed to survive and proved to be able to develop its economy. Here are some examples to support this thesis.

The dramatic events of 2014-2015 hit and disrupted the banking sector, but the reduction of the number of weak financial institutions made it possible for the NBU to take control of the situation. In 2019 it has been repeatedly suggested that after the presidential and parliamentary elections, the national currency will seriously depreciate. However, by the end of the year, the hryvnia, on the contrary, began to significantly strengthen its position. Experts mentioned this is due to investors who brought currency in Ukraine converting it into hryvnia and bought domestic bonds.

According to Oleksiy Honcharuk, Ukrainian Prime Minister, the benefits of hryvnia strengthening are obvious: wages have increased in dollar equivalent, investment imports have become cheaper. However, national currency appreciation negatively affects the exporters and the budget. Currently, the hryvnia exchange rate has stabilized. In general, in 2019 hryvnia strengthened against the dollar by 19% and topped the list of currencies that appreciated the most against the US currency.

Recently the Ukrainian authorities have tried to give maximum attention to the roads’ reconstruction and construction. No doubts, the normal and high-quality routes seriously contribute to the development of the economy. In addition, our country has always been an important transport corridor. For this reason, despite some problems, the Road Fund funding increased annually.

The Cabinet allocated a record 57 billion UAH to this field in 2019. According to the State Agency of Automobile Roads of Ukraine, for that amount they restored 2407,5 km of highways, including repair and construction of 930,5 km of roads of national significance. This year, it was budgeted over 66 billion UAH to the Road Fund.

According to Oleksij Honcharuk, Ukrainian Prime Minister, the government has set a goal to build and repair at least 4000 km of roads in this year, which should be part of Ukraine’s «major infrastructure modernization».

The year 2019 confirmed that the global trend of renewable energy sources (RES) development has finally reached Ukraine. According to the State Agency on Energy Efficiency and Energy Saving more than 2 billion euros were invested in the development of this sector in our country in January-September of the last year. Solar and wind power plants have been built, biogas facilities, small hydropower facilities, and biomass facilities have been created for this money.

In July 2018, the first solar power plant has been opened in the territory of the Chernobyl nuclear power plant, with all the necessary infrastructure in place. According to the Ukrainian Renewable Energy Association, the capacity of this solar power plant is planned to be gradually increased to 100 MW.

Every year the title of world breadbasket is more and more associated with our country. In 2019 our farmers harvested a record harvest of 75,2 million tons. According to the Ministry for Development of Economy, Trade, and Agriculture of Ukraine exports of cereals and legumes have increased by 30,5% since the beginning of the 2019-2020 marketing year.

In the 2018-2019 marketing year, our farmers exported 49,7 million tons of grain, which is a record level in the history of Ukraine’s independence. Farmers are currently waiting for land reform and land market implementation. Experts point out that these changes could initiate a flow of investment and be a major boost for the development of this sector of the economy.

Ukraine may be proud of its high technology sector. According to the N-IX study, the Ukrainian IT market has doubled over the past 4 years and continues to grow. Currently, more than 185 thousand specialists work in this field. According to HackerRank, our country is ranked 11th among the 50 countries with the best software developers. Also, our programmers took sixth place in the TopCoder rating.

The majority of IT specialists work in Kyiv, Lviv, and Kharkiv. The IT industry is one of the main areas of services export in Ukraine and brings about 5 billion dollars a year.

We should definitely mention the contribution of Ukrainian abroad workers to the development of our country. Although they work abroad, every year they make a considerable contribution to the domestic economy. This contribution surpasses the assistance of any other international financial structure. According to official data, in 2018, our compatriots transferred 10,88 billion dollars, which made up 8,3% of Ukraine’s GDP. During 10 months of 2019, the National Bank recorded money transfers accounting to 10,5 billion dollars. (over 1,1 billion dollars each month). These funds directly or indirectly contribute to the development of small business, entrepreneurship, construction, service sector.

The development of Ukraine might be a fantasy in the reports of Ukrainian officials, but the above-mentioned facts are confirmed by the ratings of international organizations. According to the World Bank, in 2019 Ukraine went up to 7 points in the investment attractiveness rating «Doing business-2020» and took the 64th place (out of 190 countries).

On January 19 this year Global Finance published the rating of the most technologically advanced countries. Ukraine took the 44th place out of 67th, outpacing Russia by two positions. Recently, a new rating was presented at the World Economic Forum in Davos – the Social Mobility Index, which takes into account a person’s ability to improve their social status. The investigation was carried out taking into account various indicators in five spheres of public life: health care, education, access to technology, work, and social protection. In this rating, our country took 46th place out of 82.

In addition, during the World Economic Forum in Davos, Ukrainian President Volodymyr Zelensky met with Suma Chakrabarti, President of the European Bank for Reconstruction and Development. The latter expressed his satisfaction with the situation in Ukraine, indicating our country to be among the Top 3 promising countries in the region.

On January 23, 2020, Transparency International published its annual Corruption Perceptions Index for 2019. Ukraine was ranked 126th out of 180, slightly worsening the result and losing 6 positions during a year. Again, in this rating, our country outpaces Russia (137th place). It is reported that Ukraine’s mark was formed out of 9 different studies. Three of them showed a slight increase, three – zero dynamics, and three – a decrease. Of course, there are some failures and miscalculations, however, psychologists advise not to focus on the drawbacks, but to look for the positive issues because they give the opportunity to move forward.

History has repeatedly proved that Ukrainians are able to organize themselves, unite, and withstand all the challenges. Our country has great economic and human potential, we just have to work assiduously, unite the nation, and multiply our best achievements.