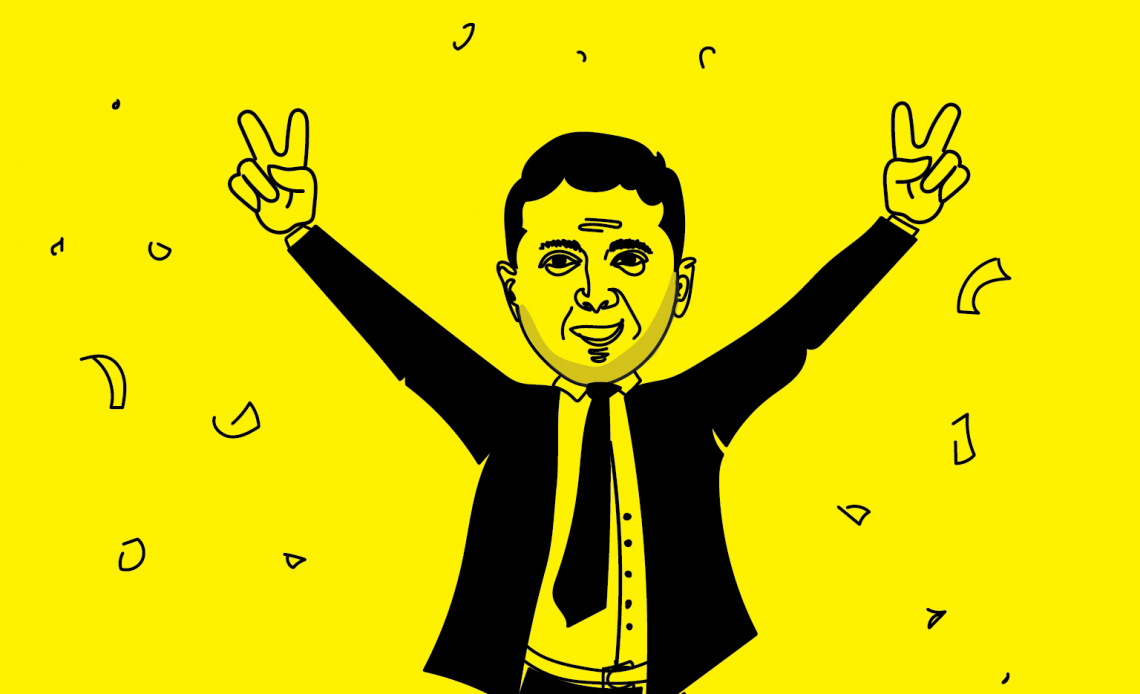 Аmonth after celebrating the 30th anniversary of Ukraine’s independence, incumbent President Volodymyr Zelensky remains the most popular Ukrainian politician. Although his rating has been steadily declining since winning the presidential election, sociology suggests that even now Zelensky would have defeated any potential rival in the second round of the presidential election. And with a score that is not much different from his victory in the presidential election. At that time, 73 % of Ukrainian voters balloted for Zelensky and 24% for President Petro Poroshenko. Zelensky would have beaten Poroshenko, who remains his main rival, with a score of 65 to 35. At the same time, according to the latest polls, 31% of voters would have voted for Zelensky in the first round. This is almost the same as in the first round of the 2019 election – 30%. So, as we can see, electoral preferences do not change. Thirty percent is the upper limit of Ukrainian populism. Why was a person who received 30% of the vote in the first round able to get as much as 73% and now can win with 65% of the vote?

It is easy to explain this phenomenon. Voting for Zelensky was and remains a vote “against” Ukrainian politicians in general, and not just against former President Petro Poroshenko, as is commonly believed. The Servant of the People project, launched on the TV channel of Ihor Kolomoisky, Zelensky’s former business partner and patron, as well as an influential oligarch, preached precisely hatred of the ruling elite as such, portraying it as a corrupt gang and opposing this elite to a “man of the people” in a naive performance by Zelensky, a television comedian who tried to become a TV actor but instead became president. Therefore, the voter of every Ukrainian politician running in the election can still imagine the one he voted for as an honest and principled person, considering others to be thieves. That is why the choice between Zelensky and any other politician is always a populist’s success. In addition, the hope for a miracle rooted in the post-Soviet space was well played. Zelensky did not promise anything to anyone before the presidential election, the most quoted being his phrase “I do not owe anyone anything.” But the future president spoke about political problems as an ordinary citizen, which was the reason for children’s hopes. Indeed, if your neighbour becomes president, and even from TV, won’t he stop the war, force officials to stop stealing, which will automatically make the country rich and successful, and achieve justice for a “little Ukrainian”? Well, politicians probably won’t do that.

Three years later, it can be stated that the expectations of the “little Ukrainians,” of course, have not come true – and the trust in the political elite has not increased either. That is why, for the time being, Zelensky remains the favourite of the presidential ratings and strengthens his own vertical power. And there are only three ways out of this situation.

The first is that Zelensky will continue to disappoint Ukrainians (and most of the country’s citizens are sure that Ukraine is moving in the wrong direction), but they will still vote for him again, just to prevent a “bad” politician from coming to power, who will steal everything. Let these simple guys, “servants of the people” from the presidential party, do this.

The second option is that some new Zelensky will appear who will repeat the accusations of the old one, but against the current government. He will also be a “man of the people” and will be supported by some oligarch – most likely, Rinat Akhmetov, who is fabulously enriched by the current market situation. And the population will happily vote for another new face, and the country will go through the usual round of disappointments and expectations of the next miracle.

And the third option is the return of professionals to power and hard work to restore the institutions that degraded during the populist rule – also, the continuation of reforms that will sooner or later bring Ukraine to Europe.

It may become clear this fall which option Ukraine is close to. The country faces many challenges. Among them are possible problems in the social sphere – all the more so if prices for housing and communal services have to be raised against the background of Moscow’s steady provocation of a shortage in the global gas market; the need to build trust in relations with the United States – Zelensky’s visit to Washington showed that the real “chemistry” between the Ukrainian president and his American counterpart Joseph Biden is still far away; and the importance of returning to reforms, without which there will clearly be no international financial assistance, which will also affect the social sphere. And, of course, Russia. Putin is again escalating tensions in Donbas, and it is already clear that the Kremlin has decided to ignore Zelensky and is not going to look for ways to resolve the conflict and end the war.

Will Zelensky be able to meet these challenges and how will society perceive his efforts? If the president’s rating falls and he no longer looks like the undisputed winner of the second round of voting, then supporters, opponents of the president, Western creditors of Ukraine, and the Kremlin’s destabilisers of the political situation in the country will have to think about what will Ukraine be like after Zelensky and who will replace him. Well, if the incumbent president continues to hold unconditional leadership in opinion polls, then it will be necessary to think about something completely different:what will Zelensky’s second term look like?