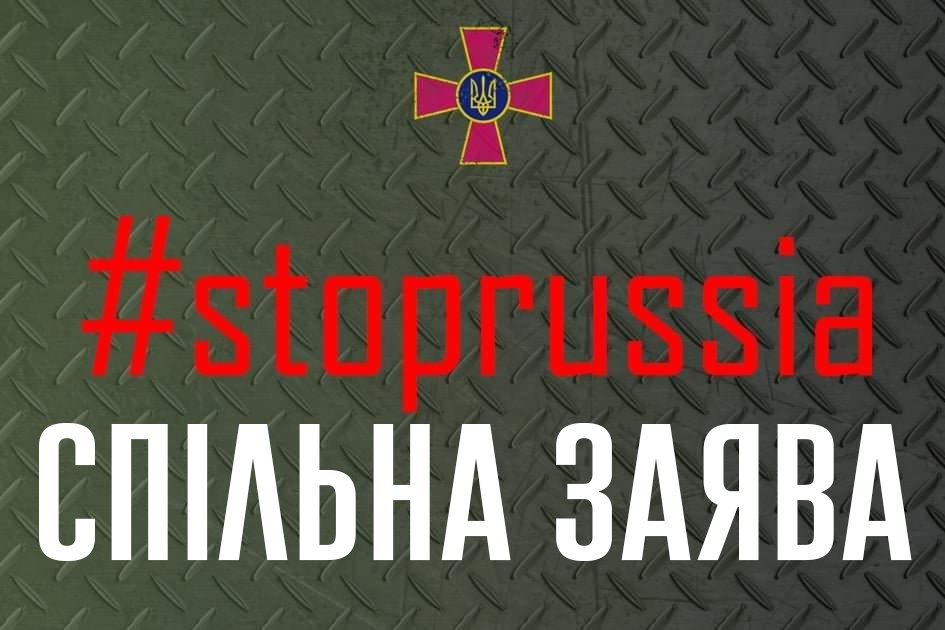 The Armed Forces of Ukraine, the Security Service of Ukraine, the Chief Directorate of Intelligence of the Ministry of Defence of Ukraine and the Ukrainian Parliament Commissioner for Human Rights demand that the UN and the International Committee of the Red Cross should respond to the Russian terrorist attack in Olenivka.

This is stated in the joint statement on the mass murder of Ukrainian prisoners of war in a colony in Olenivka, Donetsk region, on 29 July.

“We demand that the United Nations and the International Committee of the Red Cross, which acted as guarantors of the life and health of Ukrainian prisoners of war, respond immediately to the terrorist act committed by the Russian Federation,” the statement underscores.

Its authors also demand that representatives of the United Nations, the International Committee of the Red Cross, the Ukrainian Parliament Commissioner for Human Rights, and representatives of the Joint Centre for Search and Release of Prisoners of War be provided immediately with access to the territory of the colony in the village of Olenivka in the temporarily occupied territory of the Donetsk region with the purpose of an inspection mission.

As noted, on the night of 29 July, in the territory of former penal colony No. 210, in Olenivka, in the temporarily occupied territory of the Donetsk region, an explosion occurred, destroying the building in which Ukrainian prisoners of war, defenders of Mariupol, had been held. As Russian propagandists informed, more than 50 Ukrainian soldiers were killed, and more than 100 POWs were injured.

“Not a single employee of the colony, ‘DPR’ fighter or Russian military guarding the premises was injured in the explosion. Immediately after the explosion, Russia accused Ukraine of shelling the penal colony with U.S. weapons and killing Ukrainian soldiers,” reads the statement.

The Ukrainian security officers consider the committed explosion a cynical terrorist act of the Russian Federation, a military provocation, and a typical false flag operation, the purpose of which is to cover up war crimes, discredit the Armed Forces of Ukraine, disrupt the supply of Western weapons and increase social tension in Ukrainian society.

The authors of the statement underscore that the format of the evacuation of Mariupol defenders from the territory of the Azovstal steelworks provided for a ceasefire regime and surrender of the Ukrainian military with their subsequent exchange under the guarantees of the UN and the International Committee of the Red Cross.

This format was chosen and approved by Mariupol defenders who participated in the negotiations. The key condition was the obligations of the Russian side to international organisations on the preservation of lives and health of Ukrainian defenders, but this guarantee was cynically violated.

“Much documented evidence proves the planned nature of this crime and its commission by the Russian side: in particular, the deliberate transfer of fighters to new premises shortly before the explosion, analysis of the nature of the damage and the movement of the blast wave, interception of the militants’ telephone conversations, the absence of shelling in the specified place, and others. All this leaves no doubt: the explosion in Olenivka was a Russian terrorist act and a gross violation of international agreements,” the statement’s authors consider.

At the same time, the Chief Directorate of Intelligence of the Ministry of Defence of Ukraine stated that the crime had been committed by mercenaries of the Wagner (Liga) PMC under the personal command of its nominal owner, Yevgeniy Prigozhin.

“The main purpose of the terrorist attack was to hide the facts of total embezzlement of funds allocated for the maintenance of Ukrainian prisoners of war. It is known that a commission from Moscow was supposed to arrive at the ‘object’ on 1 August to check the expenditure of allocated funds and the conditions of detention of prisoners. Since the real condition of the building and the conditions of holding the prisoners in it did not meet the requirements of the Russian leadership, the ‘problem’ was solved by destroying the premises, together with the Ukrainians held in it. Another purpose of the provocation was to ramp up tensions in Ukraine. Given the great public interest in the fate of the Azovstal heroes, the masterminds of the terrorist attack believed that the death of the defenders should ramp up social tensions in Ukraine,” the Chief Directorate of Intelligence stressed.

President of Ukraine Volodymyr Zelensky heard reports on the explosion in the colony and called it a “deliberate Russian war crime.”

“Russia has proven with numerous terrorist attacks that it is the biggest source of terrorism in the world today. This is a fact. Ukrainian diplomacy brought the information about the Russian attack on Olenivka to the highest international level. The UN Security Council has been informed. All participants in international relations will know what actually happened. Russia will not be able to deceive anyone,” the Head of State said.

Zelensky added that Russian terror was primarily aimed at undermining Ukraine’s stability from within.