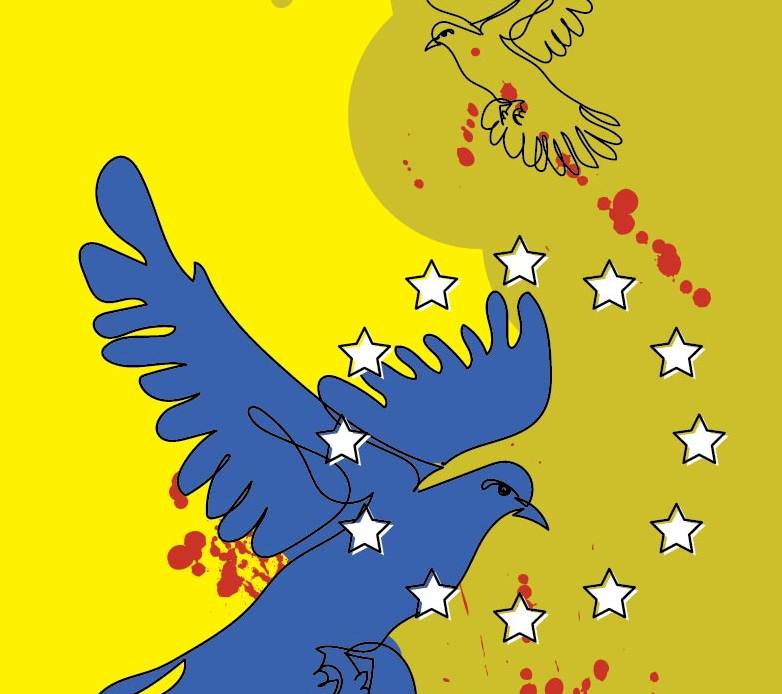 One might wonder what peace craving European parties and NGOs might have in common with the bloody dictatorial, tyrannic, militant and aggressive regime of nowadays Russia. At first look – really nothing. These parties and organisations are pro-human rights while there is not much of that anymore in Russia: according to Amnesty international reports – freedom of speech is truly absent. These organizations are also in favour of LGBTQ+ rights while Putin is openly a major homophobe: what happens in Ichkeria with non-straight people is pure horror and deserves an article of its own.

Furthermore,  parties and NGOs in question advocate workers’ rights, redistribution of wealth, and fair trade, in Russia though only a privileged few live in somewhat satisfying living conditions. Nearly half of the total wealth was held by only 1% of the population in 2020.

And yet, there is something that Putin’s regime and European “peace doves” share – the wish for Ukraine to be disarmed against Russia’s genocidal war.

A simplified narrative that “war is bad ergo weapons are bad” does not work when you are protecting your people on your territories from monsters that rape 6-month-old children. But unfortunately, these nuances can not be seen by some leftist organisations if they are sitting on such a moral high horse. That is, I believe, the endless naivete of the people who have not seen a war for almost a century, of people whose existence has never been threatened in their lifetime, and especially of people who never had to undergo Russian occupation directly.

It is absolutely not surprising to me that the countries that support Ukraine most besides the UK and US, are mainly the countries that have experienced Russian occupation: Latvia, Lithuania, Estonia, Poland, Czech Republic. These countries remember what Russian rule entails. The call upon Ukraine to cease fire and give up the occupied territories by the western peace-craving organisations is nothing less than calling upon Ukraine to let a part of its population be deported, killed, raped, and marauded. It’s a call to give up on those Ukrainians who have proved once again that they want nothing to do with Russia, like our brave Khersoners who keep protesting against Russian occupation to this day.

So, it is as clear as day that persecution of Ukrainians would not stop if Russia was able to keep the territories that they occupied. Simply because their goal is not Kherson or Donbas, their goal is to “resolve the Ukrainian issue” and I quote Putin’s speech on the 21st of February here. He says very openly on all the platforms he has that Ukraine is a fake state and Ukrainians should not exist as a nation. The terrorist state of Russia truly is an heir to the Soviet Union, and Ukrainians have lived through it already for more than 70 years: 7 to 10 million Ukrainians were killed by the man-made hunger, as declares a joint statement to the United Nations signed by 25 countries. In 2003, hundreds of thousands of Ukrainians, among which the elite of our society, were deported to Siberia (all during so-called peaceful times! There was no war between the Soviet Union and Ukraine when these horrors were happening). Naturally, Ukraine will do everything not to go through Russian occupation again. And all those high-browed Macrons of this world I want to ask, which part of France would you give up to Russia to “preserve Putin’s face” and “achieve peace”?

Yet another reason why Latvia, Lithuania, Estonia, Poland, Czech Republic, and Slovakia do their best to stand with Ukraine is the following: appeasement with the blood thirsty, hateful and imperialistic regime does not work. And they know it better than the soft, peace-loving West, who will be the next target of Russia’s aggression, – should Russia win the war in Ukraine. The entire identity and morals of Russians (yes, regular people) lie in the idea that “Russia is a great empire that needs expansion and everyone around it is an enemy”. The appeasement techniques proposed by some western politicians are just a joke to Putin. The militaristic establishment of Russia understands only power and the lack of powerful resistance is just a green light for Putin to go further. But hey, you don’t have to trust my word. Here is a list of expansionist and destabilising wars Russia has carried out during 30 years of its existence outside of the Soviet Union:

2014 – Annexation of Crimea and occupation of Donetsk and Luhansk regions

This pattern is clear and consequent: Russia is not interested one bit in peace. Peace and stability in the areas around Russia only underline clearly to its sheep population that they live in a poor country that is not interested in social or economic development. I really wish that leftist scholars like Idesbald Goddeeris and Tom Sauer, “peace-craving” parties all over Europe, and trade unions would understand that there is in principle no territory that would be sufficient for Russia to stop invading other countries because their true goal is not this or that piece of land. It’s already the largest country in the world. The goal is destabilisation of the democratic world and ability to keep own population in check through the supposed military victories (as there are no other ones to be proud of in any of the fields).

And, once again, you don’t have to take just my word for it:

Ramzan Kadyrov recently said on his Instagram: With Ukraine, it’s all clear already, now the new open question is Poland.

On Russian state TV, it is often shown how a Russian nuclear missile destroys the UK. 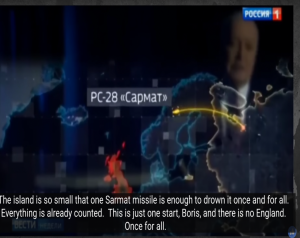 Countless threats were openly voiced to the Baltic states and Finland and Sweden.

And lastly, way too many western politicians and organisations still do not view Ukraine as an agent, a subject, not an object in this war. All those narratives that it’s a conflict between Russia and the US or Russia and NATO only support Russian propaganda. There are only 4 kilometers between the border of Russia and the USA in the north, close to Alaska. If it was about Russia vs the US then maybe they would have gone with their armies that way.

It’s also crucial to stress that there are no other sides responsible for this war besides Russia. It began with unprovoked invasive aggression in Ukraine. Expansion of NATO to the east as a casus belli is a weak non-argument because NATO did not forcefully make Ukraine a member against its will. Ukraine, in a democratic way, selected its development course toward the EU and NATO, and Russia does not have a say in it. Everything else is victim-blaming. So, I’d like to ask these western intellectuals who blame NATO for the war in Ukraine, whether they also blame a rape victim because she went on a date with a different guy? Or maybe Ukraine was wearing a very short skirt?