Young Ukrainians on Trade with Russia: It Is a Rigged Match 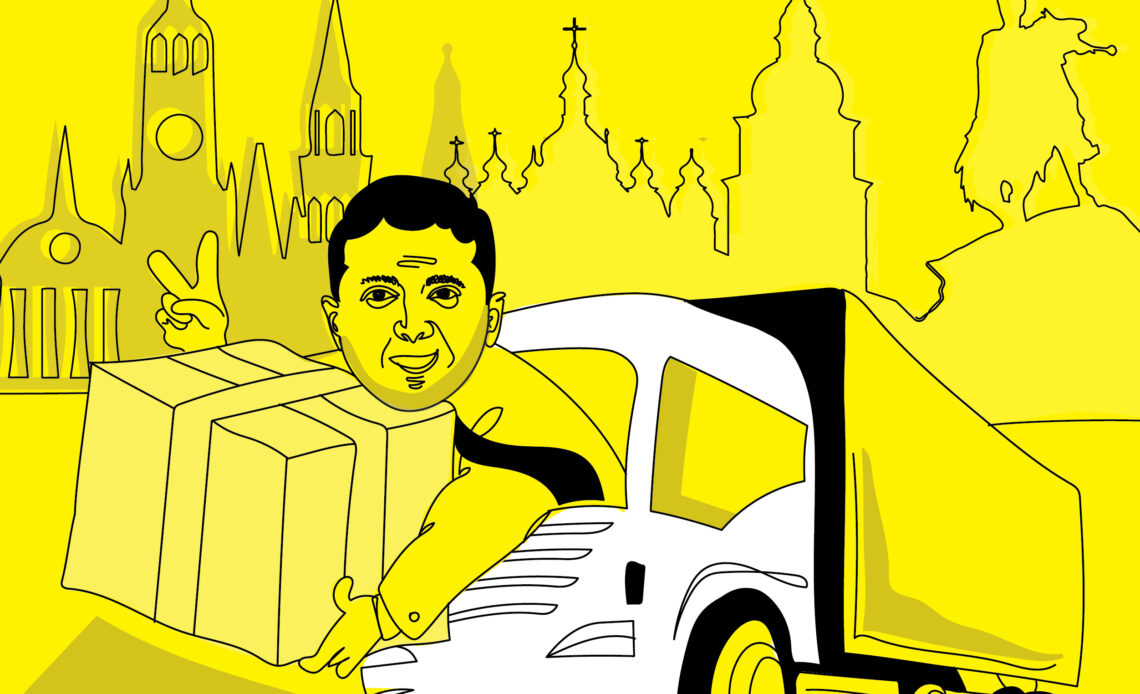 In recent years, after the illegal annexation of Crimea and the start of hostilities in the Donbas, the expediency and profitability (or unprofitability) of economic cooperation with Russia is still hotly debated in Ukraine. Some people believe that Kyiv should not maintain economic relations with the aggressor country, other people say that trade with Russia is essential.

While there is a serious debate on this topic with the participation of politicians, economists, analysts, etc., the young generation is also expressing its views – those who were born in independent Ukraine or were still very young when the Soviet Union collapsed. Quite interesting ideas about trade relations with Russia were presented by participants of the Kyiv School of Economics course “Cards, Values, Money – Where the Success of the State is Hidden,” by Oksana Syroyid, a well-known Ukrainian politician, leader of the Self Reliance party, and Verkhovna Rada deputy of the last convocation.

Kyrylo Sydorchuk, lawyer, specialist in the field of advocacy and lobbying, 30 years old:

“Several months before the Revolution of Dignity, there were many discussions about whether we should choose the Association Agreement (with the EU – ed.) or the Customs Union (with Russia – ed.). In favour of the Customs Union, the argument was made that industrial enterprises in the south and east of our country are mainly focused on the Russian market, and therefore dependent on the political situation. There was an opinion that if we sign the Association Agreement, due to the prevalence of quotas and backwardness of production, these companies won’t be able to withstand competition.

Instead, Russia would want to “protect” itself from our common European market, orders would no longer arrive, and these companies would simply go bankrupt. But in terms of strategy and not tactics, this argument was supposed to work against supporters of the Customs Union. The desire to focus on a country that uses backward production significantly narrows, and even completely eliminates, innovation and further entry into new markets, although it will bring good and stable profits in the short term. But it’s not just about the financial aspect.

A common market with Russia is impossible without the further adoption of the corrupt rules of the game prevailing in the Russian Federation. This implies that the business entity is protected not by institutions, but by acquaintances, closeness to the state authorities and persons who can “solve issues.” If we remain in the Russian-coordinated system, we would actually recognize that ‘rigged matches’ are common and profitable for us, as opposed to the rules of fair competition and the free market.”

“For so long as we discuss whether something is profitable or unprofitable, we lose.

Of course, the renunciation of trade dependence on Russia will make it possible to: first, open new markets for Ukrainian companies and liberalise trade regimes; second, attract investments for the development of strategically important sectors of the economy and infrastructure (the aggressor simply cannot be interested in the prosperity of our economy and state); and third, learn Western management style and business culture.

But there are fundamental things we need to remember: the formation of Ukrainian statehood, the values we want to see at its core (this is where our paths with Russia diverge), and the war. Our soldiers are at war whilst we continue to trade (with the same country – ed.)?”

“There is an important factor for which communities come together, states are created, and companies are working. The safety factor. It is important for a businessman or woman to keep his or her business safe. The biggest problem today for both small and large businessmen or women is that they constantly feel in danger, due to instability in the state: frequent protests and revolutionary activities; corrupt officials who, due to the very nature of corruption, demand more and more; physical, economic and legal insecurity; and the coronavirus pandemic came very unexpectedly.

But look at businessmen, for example, in Poland – the state takes care of them. There are always opportunities to submit various applications for co-financing to develop business, to withstand the dangers of the pandemic, to secure the payment of wages to employees, to get interest-free government loans, etc. Businesses, especially medium-sized ones, are in the focus of government institutions. One of the main points of the anti-crisis resolution of the Polish government was actually helping medium-sized businesses and… attention! culture! Because it is super important for the state!

Business security is the basis of calm and standardised management and development! And if I wanted to persuade our oligarchs (not to cooperate with Russia – ed.), I would ‘scare’ them! I would scare by the pure truth. Because the truth is that cooperation with Russian partners is not only deprived of transparency and equality in most cases. It means that such cooperation is fraught with danger and consequently mistrust and high risks. Hence there are the unnecessary losses as compensation for normal relations. If I did a state program to “intimidate” such businessmen and women, I would launch a series of films that would tell about what happened to those who dealt with the Russians.

The most interesting thing is that you wouldn’t have to invent anything. Because I’m sure that there are many cases of deception and ripping off their business partners. There are objective reasons for this, from immorality and mental rigidity to frankly harmful tasks. These risks are greatly reduced in Europe because there are laws and institutions, there is a court and levers for protection and, ultimately, a culture of coexistence, and therefore of doing business and cooperation. Thus, security is something that could be operated on when we persuade small and large businesses not to cooperate with Russia.

I knew a businessman who, before the Association Agreement was signed, reoriented his business to the West, although it was completely tied to Russia before that. I asked him, ‘Why?’ And he said, ‘It’s simple. Markets are multiplied by a thousand. And it is quiet because I deal with decent people who invest even in my future decency, trusting and helping to build a convenient and transparent system of cooperation at the expense of their investments.’

And this must also be explained, because Europe, although smaller territorially in comparison to Russia, but the population density, culture and markets there have just crazy development. I recently met this businessman, he is incredibly pleased and remembers the past years (cooperating with Russia – ed.) without much romantic nostalgia.”

“Everywhere I look, even in economics, I do not see economics, but rather ideology. When I read The Federalist Papers (a series of 85 essays in support of the ratification of the US Constitution, published in 1787-88 – ed.), my impression was that the authors wrote not so much about trade as about influence and power. And they talked about the importance of introducing these common rules for all States in order to defeat others.

By the way, there are many similarities here with Ukraine in the sense that the United States is, in fact, a postcolonial entity that has struggled for a long time and sometimes continues to struggle with its own postcolonial complexes. I was amazed that in the text there is a certain propaganda of self-sufficiency and power. All the time the authors mention power and influence in the region.

All these arguments can be applied to Ukraine, it’s simple: one, two, three. Also, there is a good thesis about influence in our region: after Russia, Ukraine is the second-largest country from the former Soviet Union, which has a potential influence wider than itself, that has, relatively speaking, potential ‘neo-imperial ambitions’. This is not Belarus, and this is not Armenia, and this is not Kazakhstan, but Ukraine.”