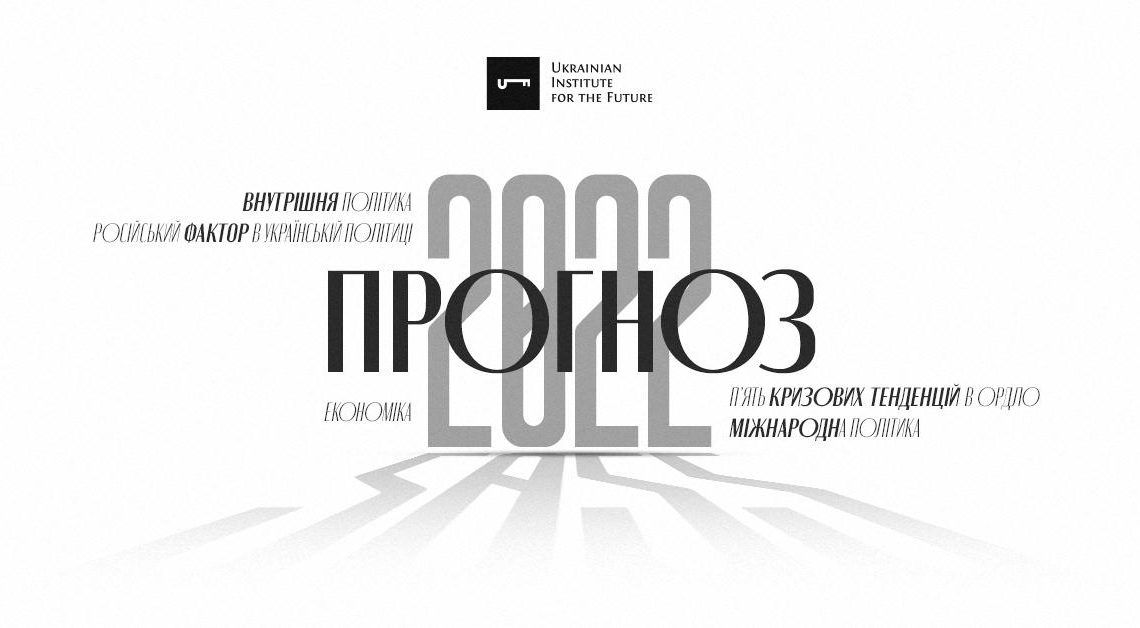 The Forecast 2022 report by the Ukrainian Institute for the Future was presented within the framework of the 3rd Alumni Forum of the Serhiy Nyzhny Kyiv School of Public Administration. The Forecast identifies four scenarios for developments in Ukraine’s domestic policy and external political threats.

The first scenario is called “Perfect Storm.” It envisages agreements on Ukraine between key world players but, unfortunately, without our participation. As a result, we lose support from key allies. At the same time, prices for our traditional major exports decline, domestic protests and confrontations between the authorities and key financial and industrial groups that control the main media resources take place. The probability of this scenario is extremely small – no more than 10%.

The second scenario is called “All-out war.” The conditions of its occurrence are similar to the previous one. The foreign policy situation is not in our favour, we do not get enough resources necessary for the economy, including financial, we are forced to make compromises on Donbas, and we get an internal confrontation in which Zelensky enters into an alliance with one of the financial and industrial groups as a junior partner. As a result, we repeat the cycle as of the end of 2022 and find ourselves in the situation of the summer of 2021, just having a weak Zelensky.

The probability of such developments is quite high, up to 50-55%.

The third scenario is called “First steps to become Lukashenka.” The conditions for the scenario are similar to the previous one. But inside the country, Zelensky will have to enter into an alliance with one or more financial and industrial groups, start a fight against “dissenters,” taking full control of the power bloc. Conducting “populist initiatives” and launching rhetoric — “those against us are against change” — is a must. As a result, after winning, Zelensky will begin to reformat the government.

The probability of this scenario (provided it is highly attractive for Zelensky’s entourage) is not more than 30-40%.

And, finally, the last scenario – “Father of the Nation.” The key condition for the scenario is an event shocking to Ukrainian society, or an event that can be imagined as such with the help of the media. This could be a large-scale natural disaster, man-made problems, or Russia’s open aggression. A full-fledged invasion is not necessary: a sharp escalation in Donbas would suffice.

The event must be large enough to provoke a reaction from external partners, boost support for Ukraine, and provide guarantees (promises) of a further increase in volumes.

The probability of this scenario is extremely small and does not exceed 5%.

Ukraine is not part of regional logistics projects, transport corridors (for example, Three Seas, One Belt One Road, North-South, TEN-T transport network, etc.); it does not use the opportunity to create an alternative to the Trans-Siberian highway (via the Black Sea and the Caspian Sea) to redirect cargo flows from China from Russian direction to the Ukrainian one.

As a result, Ukraine will act as a buffer zone and reduce its geostrategic value, move to the periphery and become an island bypassed by all transport networks.

Russia attempts to impose an energy blockade on Ukraine restricting its supplies (electricity, coal, oil products), as well as inclining Belarus to do so (electricity and coal), blocking transit from Kazakhstan (coal and LPG), in particular, to form preconditions for solving key issues: Donbas, long-term gas and energy contracts, disruption of European energy integration, etc.

Risk of agreements between the US, EU, and Russia, in particular on issues related to Ukraine.

Risk of energy security of Ukraine, military and political risks. Russia may expand its military infrastructure on the Ukraine–Belarus border and influence the supply of electricity and oil products. There are two variants of the political crisis in Belarus:

– Lukashenka remains in power and becomes more controlled by Russia

– A new, weak president appears in Belarus, who will be even easier for Russia to govern.

Ukraine does not fall into the club of countries that make the “green transition,” lags behind technologically, and remains an object of international relations.

Russia binds Ukraine with economic agreements. Ukraine remains a mediator between Russia and the West.

Since Ukraine does not have a concept of balancing between the United States and China, Ukraine runs the risk of falling into a tough choice between two partners.

The ruling parties in Poland and Hungary may enter into conflicts with Ukraine over history, national memory, minority rights to address political issues with the EU, and mobilise supporters.

This carries political and humanitarian risks for Europe that will indirectly affect Ukraine.

The risk of an influx of illegal migrants and refugees into Europe via Ukraine, currently being held back by Turkey.

This carries the risk of Ukraine’s conflict with the EU.

The influx of migrants, in particular related to climate change.

Source: Ukrainian Institute for the Future