Analysing Russia’s narratives around COVID-19 in the occupied territories of Ukraine: Oleksandra Tsekhanovska 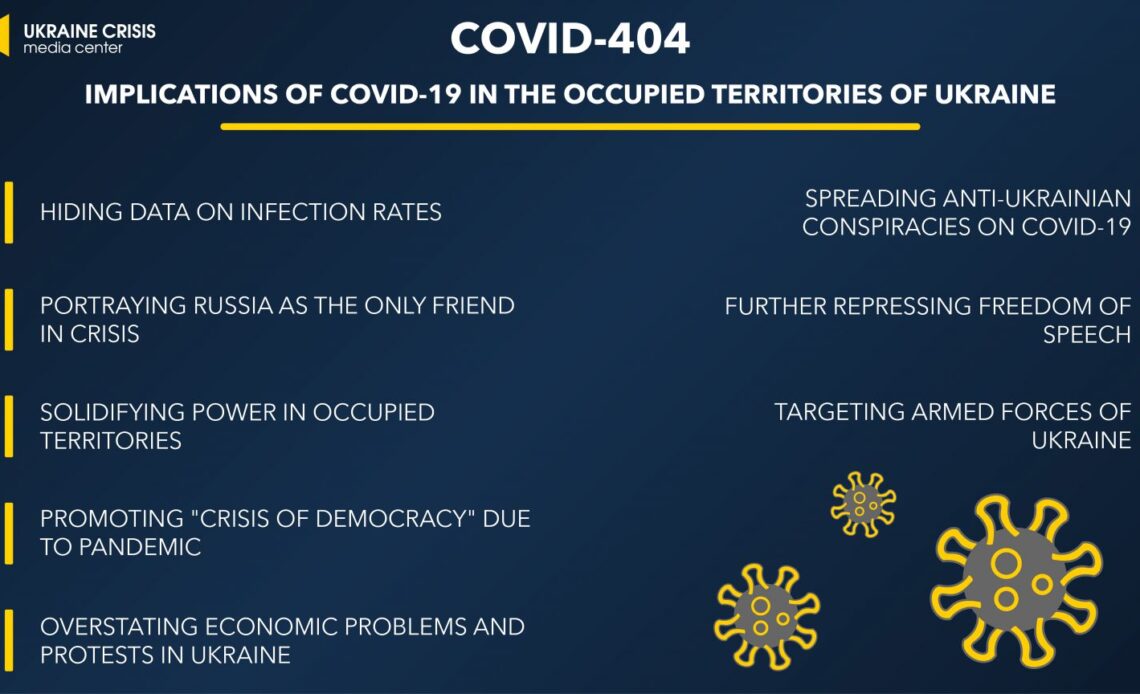 As Russia comes second in the world with a number of confirmed COVID-19 cases, it retains a remarkably low death toll – which caused wide suspicion instead of optimism. Financial Times and New York Times, after taking a look at a spike in Moscow’s all-causes mortality, assume the actual number of deaths from coronavirus in Russia might be 70% higher than official statistics claim. Needless to say, Kremlin is not amused – MFA has already accused the outlets of publishing “another sensationalist anti-Russian fake”, demanding the refutation and threatening to revoke journalists’ accreditation. As the proverbial “don’t believe anything, unless Kremlin denies it” comes to mind, another cause for concern arises. Just how bad is the outbreak – and what implications it entails – on the Russian-occupied territories of Ukraine?

Lack of testing and classified information make it difficult to establish the actual number of victims.

Puppet governments in Donetsk and Luhansk – unsurprisingly – follow Kremlin’s playbook. Occupying authorities paint a pretty picture amidst the global pandemic: Donetsk claims there are 214 total cases and 5 deaths, while in Luhansk region the situation seems more difficult with 308 total cases (As of May 15, 2020) – interestingly, the so-called “Ministry of Health” did not mention the death toll in their latest address. There is little to no belief in these numbers, and not only because Moscow-installed authorities delve in disinformation on daily basis.

Red Cross representatives express doubt whether tests for COVID-19 are available on the occupied territories. Thus, even establishing an accurate infection rate is close to impossible, although, according to Eastern Rights Group, in certain hospitals patients suspected to have died from COVID-19 are subjected to autopsy – and the results remain classified. With the overall humanitarian crisis occupied regions of Donetsk and Luhansk oblasts (ORDLO) are in, the situation is presumably much more dire than propaganda outlets let on.

Kremlin keeps playing the “humanitarian aid” card – while occupying administrations are more unsustainable than ever, Moscow needs to preserve both its positive image and control over local population.

Instead of informing the locals about actual situation on the ground – which, for the abovementioned reasons, likely is a mystery for occupying administrations themselves – the focus remains where it has been for the last 6 years: spreading pro-Russian and anti-Ukrainian disinformation. Russian Federation, as always, is portrayed as the only friend on whom the locals may rely as opposed to Ukraine and the West, which have allegedly abandoned ORLDO.

Russia has shut its borders with one exception, and that is precisely the occupied territories – the explanation lies in a mutual dependence on “humanitarian aid” scheme. For Donetsk and Luhansk as receiving parties the need is understandable. Puppet republics are not only politically, but economically unsustainable, and they cannot manage the situation without external help – especially considering that it more often than not includes weapons and ammunition, as COVID-19 did not stop hybrid forces from repeatedly violating ceasefire. For Russia the need to supply this aid is less obvious, but still pressing. Without it, not only the PR-opportunity slips away, but the leverage over territories becomes smaller, as there are three crucial tools to control the local population – military, relentless disinformation and economic incentives. If one of these pillars is undermined, Kremlin has less control over the ever-present threat of chaos. With ongoing attempts to pressure Kyiv into accepting Moscow’s vision of Minsk and subduing it to federalization, tight grip on the local situation is quintessential.

Advertising Russian “humanitarian aid” is not the only obligation of occupying authorities in media field. They persist in targeting Armed Forces of Ukraine in a usual manner, constantly bombarding the locals with messages about AFU’s alleged shelling and subsequent victims. According to basic rules of propaganda, the enemy must be portrayed not only as threatening, but as vulnerable at the same time, and COVID-19 has provided an opportunity for that. Local “media” repeatedly overstate the number of cases in Ukrainian military. According to InformNapalm, the so-called “official press-service representative” in Luhansk Yakov Osadchiy claimed that 59th mechanized infantry brigade was recalled from Joint Forces Operation zone as allegedly 79% of personnel was infected with COVID-19. AFU has debunked the claim.

Moreover, local propaganda followed Russian federal channels in revitalizing the old conspiracy theory about disease being a biological weapon. “People’s militia” suggested coronavirus might have leaked from a CIA-controlled Ukrainian lab – one of the 15 laboratories that leader of pro-Russian “Opposition Platform – For Life” Viktor Medvedchuk called American and demanded an investigation into their activities (Russian media caught on quickly as they now the drill with Lugar Center in Georgia). The conspiracy was debunked, as labs are under control of Ukrainian government and have only partially received financial assistance from the USA.

Occupying administrations criticize limitation measures in Ukraine, while economically struggling with quarantine in ORDLO and trying to strengthen their authority where possible.

Quarantine measures are another issue highlighted in the media. Ukraine is consistently targeted by Russian and pro-Russian media for having exceedingly strict limitations, violating human rights and suffocating business – for example, these issues are in constant focus of one of the most notorious pro-Russian resources Strana.ua. Meanwhile, in occupied territories limitations are softer and stricter at the same time. They are mostly regulated within the framework of “high-alert regime” imposed by Denis Pushylin. For example, public transport, unlike in government-controlled Ukraine, kept operating and churches were open for Easter (which also must have contributed to the spread of disease).

On the other hand, puppet administrations solidified power where they could. Curfew remained in place, local “law enforcement” is tasked with controlling the self-isolation regime and, following Kremlin’s example, responsibility for fake news about coronavirus is criminalized – which, in a militarized authoritarian political entity can only result in further repressing freedom of speech.  Taking a toll on the already dire economic situation, COVID-19 also forced the occupying authorities to take steps such as cancelling benefits for the older population when using public transport – allegedly so that they do not travel much and endanger themselves less.

As Kremlin’s governance strategy differs significantly in ORDLO and Crimea, so do the implications of COVID-19. Peninsula is heavily integrated in Russian administrative and legal system, as Putin’s Russia has no intention of ending annexation, while it hopes to return puppet republics with enormous authority to federalized Ukraine as a “Trojan horse” to control its internal and foreign policy. According to the so-called “Head of the Republic of Crimea” Sergey Aksyonov, there were 272 cases of COVID-19 and 3 related deaths on the peninsula – while the actual number is probably much higher.

Crimea is subjected to all the narratives spread by Russian state-controlled media on the issue (not that they evade ORDLO) – “disintegrating EU”, COVID-19 allegedly demonstrating the end of Western values, “effective” Russian and Chinese management of the crisis as opposed to Western democracies to name the top three. Building a negative image of Ukraine in this territory is of special importance for Kremlin to ensure the population will have no sentiment to return. It is, therefore, emphasized, that Kyiv does a bad job at containing the disease and managing the crisis.

Focus on economic difficulties in Ukraine is substantial, because Crimea, heavily dependent on tourism, has an excruciating year so far due to limitations – not to mention the problems with water that are expected to be more acute this summer. Moreover, punishment for “fake news” regarding coronavirus might be misused here more than anywhere else, as Kremlin has been on witch hunt for independent journalists and anyone it sees as supporter of Ukraine since very annexation.

COVID-19 presents a set of dramatic challenges for all states, but for authoritarian regimes the problems double. Non-transparent, designed to support the ruling elite instead of population, cleptocratic – they are more vulnerable to the crisis posed by pandemic. And yet, the stakes are even higher for authoritarian regimes that try to maintain their hold on territories they have occupied. Scarce resources need to be redistributed and control – which is now shakier – needs to be maintained at all costs. The cost, however, is ultimately covered by people living on those territories: deprived of accurate information substituted with propaganda, the only cure from COVID-19 they have is a bitter placebo pill of thinking that, at least, Ukraine does way worth.