The Ukrainian-controlled Stanytsia Luhanska, with a population of about 13,000 inhabitants, is close to the Zhovtnevy district of occupied Luhansk. Before the war, there were strong socio-economic and infrastructural ties between Luhansk and Stanytsia Luhanska. To date, these ties disappeared, and none can find an alternative. That creates a stagnant socio-economic crisis for years. However, the combined efforts of the local and central government, and active civil society can improve the situation. 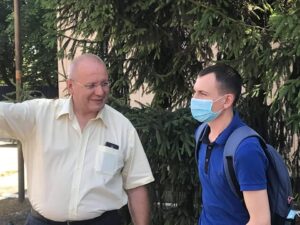 The whole tragic scale of the frontline village and all the region problems becomes visible during the conversation with the Stanychno-Luhansk district state administration Head Yuri Zolkin, the PR and mass media department Head Mykhailo Shevchenko and the Stanytsia Luhanska people. These problems stemmed from the partial occupation of Luhansk region territory in 2014.

Thus, the Stanychno-Luhansk railway has been cut off from the rest of Ukrzaliznytsia since 2014. As a result, it lost the connection with the rest of Ukraine. Now, one branch line leads to the occupied territory in Luhansk, and the other to Russia.

The developed water supply infrastructure, designed to provide water to the whole of Luhansk and the region in Stanychno-Luhansk district along the Donets River banks, remains inactive. Instead, this infrastructure has to serve only small settlements. The lack of rail connections between the region and the rest of Ukraine, which transited previously via Luhansk, destroys highways because of overloading. The trade links disruption with Luhansk chronically facilitates socio-economic depression.

System of power and decentralisation

Unlike many other frontline communities, the military-civil administration was never established in Stanytsia Luhanska. The village of Luhansk is an urban-type settlement that has its own local government body – the village council. However, there are questions about the viability of the village council elected in 2010. Therefore, the majority of the problems and a job to solve them falls on the Stanychno-Luhansk District State Administration. The problem is that some deputies of the Stanychno-Luhansk village council live in the occupied territories – this happened historically before the war. And the local elections in Stanytsia Luhanska in 2015 were never held due to hostilities. Accordingly, today ensuring the quorum and capacity of the village council session in decision-making is quite complicated. To imagine this even practically is difficult.

On 17 July, the Verkhovna Rada of Ukraine adopted Resolution № 3650 “On the formation and liquidation of districts,” which, among other things, established a new Shchastynsky district with its centre in Novoaydar. Accordingly, Stanychno-Luhansk district will cease to exist. Instead, several OTGs will be formed, including Stanychno-Luhansk. However, the Stanychno-Luhansk OTG ability without external support is doubtful.

Challenges of the Stanychno-Luhansk OTG future

There are almost no lands on the territory of the future Stanychno-Luhansk OTG that would bring profit to the community budget. Currently, Stanytsia Luhanska lives because there are large legal entities that pay taxes and, in particular, personal income tax for their employees. Among them is the district department of education, where all the teachers of the district and the district pension fund, social insurance, etc. are located. Therefore, despite the industrial enterprises stopped working, Stanytsia Luhanska executed the budget at the expense of state employees.

For example, before the war in Valuysky village, there was a fish farm, an asphalt-concrete plant, a bread-receiving point, a chain of shops, two to three enterprises for drinking water extraction and bottling. When the hostilities started, the Luhansk market disappeared, as well as the railway, which exported the products of the above enterprises to other regions of Ukraine. Now, Valuysky has a subsidy budget.

The Stanychno-Luhansk district council votes regarding a subsidy to the Valuysky budget approximately every three months. That allows at least the payment of salaries to the local government staff, which has only a few officials left. Therefore, when the Stanychno-Luhansk district disappears with its key taxpayers – state employees, there will be a large budget deficit in Stanytsia. Currently, the Stanychno-Luhansk District State Administration fills the budget as much as it can. For example, military units, based near Stanitsa, paid personal income tax in other bigger cities of Luhansk region. However, the authorities negotiated this individually, after that the military paid these taxes in the village.

Unfortunately, the war and the disruption of socio-economic and infrastructural ties with Luhansk severely undermined the local economy of Stanytsia Luhanska and the entire region. Some of the enterprises were dismantled and taken away to the other Ukrainian areas.  Some went bankrupt and closed. However, both in Stanytsia Luhanska and in other towns of the frontline Luhansk region, points of potential economic growth can be identified.

The Luhansk village is a greenhouse region

In Stanychno-Luhansk district, there are a lot of medium and small entrepreneurs working in the agriculture sector. However, agricultural producers need, first of all, the cooperation to be able to sell their goods to outside markets, as one can’t deliver much to the Severodetsk and other cities alone on conditional “Zhigul.” Secondly, a railway is needed. But currently, it has no connection with the rest of Ukraine.

The restoration of the divided railway

If the railway is built-up, a railway station of pre-war Luhansk may appear in Stanytsia, locals say. All railway connections in the region before the war transited through Luhansk, which is now occupied.

Before the war, the largest taxpayer in the Stanychno-Luhansk district was the railway (at the expense of personal income tax). Thus, at the stations located near Stanytsia Luhanska, Kondrashivska and Kondrashivska Nova there were big railway hubs before the war and always repaired rolling stock and locomotives from all over Ukraine. Thousands of railroad workers worked here and paid personal income taxes.

Now, the railway is somewhere on the 10th place in the taxpayers ranking in the area and had significant cutoffs. That is, all this railway infrastructure of hubs is currently maintained, and, at least, not stolen.

If this site is reconnected with the Ukrainian railway, the trains can start going in all directions. Thousands of Ukrainians from the occupied territories will be able to leave Stanytsia Luhanska for Lviv, Odesa and Kyiv. The locomotives coming for repairs will be possible again. That means jobs and taxes, and the agricultural products export can start, too.

Nonsense, but currently in the Stanychno-Luhansk district, located on the sand, one cannot buy sand officially. No company produces sand legally today, which is a big issue.  Nothing will change without the railway. Yes, there was another plant of construction mixtures. However, the owner dismantled it and carried it to another area. There were plenty of bottled water companies. But without the railway, taking it out of here is economically unprofitable, too. Also, due to the lack of a railway, the asphalt-concrete plant stopped.

According to various estimates, near 15,000 people crossed the border daily in both directions through the Stanytsia Luhanska before the quarantine. And about UAH 500 million of different social benefits from the Ukrainian state were transferred by these people and received by the occupied territory residents monthly.

As a result, many “shadow” sellers have emerged, i.e. the residents who make their living by transporting and selling goods to the occupied territories with motahs. However, this activity is not undertake regulation of  law and is not taxable.

Currently, locals propose organising  a logistics centre at the checkpoint, as Stanytsia Luhanska is a greenhouse region. The majority of greenhouse vegetables, strawberries, cucumbers used to go to Luhansk. However, the checkpoint is closed due to quarantine. So, currently, there is neither a market in occupied Luhansk nor free Ukraine due to the lack of railways and insufficient cooperation of producers.

Denis Bigunov, within the project “In the frontline”