Painted eggs (pysanky), now one of the main symbols of Easter, began to be depicted on the territory of modern Ukraine several thousand years ago. Vadym Mytsyk, a well-known ethnographer, a Trypillian culture researcher and author of two books on Ukrainian Easter eggs, said this in an interview with Promote Ukraine. According to him, among Ukrainian Easter eggs, the ones of the Cherkasy region occupy a special place: 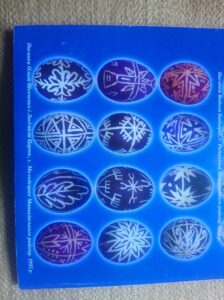 The history of oil painting, which includes the art of making Easter eggs, dates back to 5-6.5 thousand years ago when the Trypillian civilization began to develop. In this civilization people grew grains; they also had very rich pottery with artistic paintings, conical pots were painted decorative trim close to the shape of the egg. The universe is four-pointed horizontally and three-pointed vertically.

The history of oil painting, which includes the art of making Easter eggs, dates back to 5-6.5 thousand years ago when the Trypillian civilization began to develop.

Starting somewhere in the 17th century the remains of Easter eggs, colorful eggs are found in the graves. It was believed that after death a person should also celebrate Easter and so to speak, be involved in the development of the life that he or she leaves with his or her family and nature. In the Dnipro area, ceramic pysanky were found approximately in seven settlements of Kievan Rus. They are also included in my book.

Do Easter eggs in the Cherkasy region occupy a special place in the history of pysanky?

Yes, precisely because most of the Easter eggs of Kievan Rus were found there. That is, the history of the Ukrainian pysanky started in ancient times, and if you go further, it is a Trypillian civilization because the images were in ceramics but in the oval form, in the shape of an egg.

Were pysanky banned in the Soviet Union?

They were associated with Easter and funerals. Anti-religious propaganda was essentially destroying the skills of our people and most of all – artistic language. I emphasize that it is more difficult to draw on a spherical surface of an egg than to draw on any flat surface.

Pysanky exist not only in Ukraine but for example in Croatia, the Czech Republic. Is there a big difference between them?

I looked at the painted eggs of European Slavic countries. Still, there is no drawing, there is no such fine style that Ukrainian Easter eggs have. In particular, we consider the Easter egg as the image of the sun and the origin of life. Our pysanky portray everything that contributes to life – the sun, the dawn, the tree of life. These are certain plants, peas, there is a three-, four- or an eight-part combination. 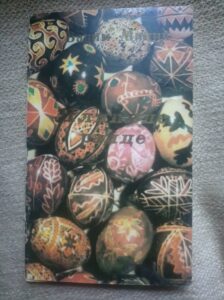 Are there Easter eggs in Russia?

Yes, in those areas that are territorially and ethnically belonged to Ukraine. This is Slobozhanshchina because Kharkiv remained Ukrainian territory but Kursk, Voronezh became part of Russia. Nevertheless, this territory is not only ethnically Ukrainian, but it is also Ukrainian-speaking. So, people were engaged in art, embroidery, etc., and on Easter and in commemoration of the dead, they always painted Easter eggs. For sure.