Food Crisis: $400B Worth of Food Wasted Globally Each Year

Impressive numbers show that people around the world throw away kilograms of food totalling USD 400 billion annually. In the EU, up to 30% of food goes to waste, causing global economic losses worth about a trillion dollars per year.

At the same time, most Third World countries still suffer from food insecurity. About 800 million people – every ninth inhabitant of the planet – are undernourished.

Today, Ukraine ranks 9th in the world in terms of waste production, generating 7 million tonnes of organic waste annually. Most of these are food products that are about to expire but can still be consumed. Promote Ukraine asked experts about the ways to deal with this problem, the current situation with food overproduction in Ukraine and special programmes to effectively sell expired products, waste, etc.

Inefficient use of food is a serious problem worldwide. In particular, UN experts report that a total of 235 million people may be in need of emergency humanitarian assistance amid the pandemic this year. At the same time, the number of those who need it has increased by a record 40% compared to the same period last year, according to the Global Humanitarian Overview 2021 by the United Nations Office for the Coordination of Humanitarian Affairs.

In addition, the UN predicts a humanitarian crisis in 2021, which will be the largest one in 75 years, due to the effects of the pandemic. Therefore, UN funds need an additional USD 35 billion (over EUR 28 billion) to provide support.

The UN World Food Programme has already announced a campaign to combat food waste. It is designed for owners of restaurants, cafes and supermarkets, as well as ordinary consumers. People are urged to take good care of their food, not to buy a lot of food and “save” it from garbage cans.

Many countries around the world have so-called food banks to solve the problem of food waste. These are non-profit, charitable organisations that collect expired food products from manufacturers, trade organisations, public catering facilities, individuals or other suppliers. Such food is given to those who need it.

In Europe, the first food bank appeared in France in July 1984. In Ukraine, such a food bank is already operating successfully in Lviv and plans to expand its activities.

In particular, a year ago Rostyslav Kosyura from Lviv decided to help fight food waste and set up the Tarilka project. The organisation takes from retail chains food products that are not spoiled but are no longer fit for sale. Usually, supermarkets throw such food in the trash, but why, if it can still be useful?

Tarilka transfers salvage food products to low-income people through social services. Volunteers now collect food in several chains in Lviv, and soon plan to work in other cities of Ukraine. In particular, they want to create volunteer networks to cooperate with local authorities and businesses. 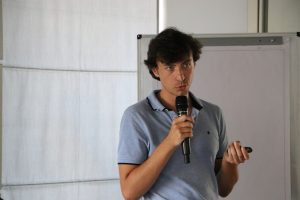 Food waste is everyone’s responsibility. According to the Food and Agriculture Organisation (FAO), the world loses an average of a third of food production, while, for example, in the United States this figure reaches 40%. In this case, food waste is generated at all stages of production: from growing, processing and packaging to purchasing and consuming. Therefore, the responsibility for food waste is shared between business and consumers. There are both irrational consumption and inefficient production, when food is unevenly distributed, and sometimes overproduction occurs.

Ukraine has a similar situation. There are no exact figures; there are only rough estimates. Thus, according to the NGO All-Ukrainian Environmental League, each Ukrainian annually produces an average of 250 kg of waste, half of which is food. Most waste is generated due to transportation and storage problems. Many food products are spoiled in the retail sector, catering establishments, and in the process of consumption.

Despite the fact that solving the problem of food waste is beneficial for both the environment and the economy, Ukraine does not pay enough attention to this problem. In particular, there is no definition of food waste in the legislation, there is no understanding of how to solve the problem, and there is no centralised collection of food waste (in general, the practice of separate waste collection is not introduced). Also, there are no composting stations, and there is no explanatory work among citizens. The environmental community has been paying attention to this for many years, but discussions on the draft law on waste management began only in the last few years. At the same time, even if it is adopted, it will take years to introduce new practices, and no one will recycle the waste.

Since the state does not pay attention to this, the amount of accumulated food waste is growing in Ukraine. Almost 100% of food waste is disposed of in a classic way – it is taken to landfills, which have already exhausted their resources. As a result, methane, a greenhouse gas, is released.

Instead, the potential of composting technology is not used. There are only a few initiatives across the country, which can organise food banks. This is definitely not enough.

Food waste is a problem of consumer economy and lack of public awareness. Therefore, first of all, explanatory work should be carried out among the population. The first step is special lessons and trainings in educational institutions. The second is work with manufacturers and sellers. The third one is work with companies, media outlets, and communities. Both businesses and people need to be aware of the problem and know what they can do to solve it. At the same time, the government should encourage the rational use of resources, their recycling and waste sorting. Consumers should be interested in this. The best way is an economical one.

However, there are also positive examples. For example, the Zelene misto utility launched an organic composting station in Lviv which plans to process 30,000 tonnes of organic waste annually. The Danone company donates part of its products to charity; if a product passes its shelf life, it is sent to a biogas plant.

To sum up, today there are several possible solutions. The first one is rational consumption. It is important to choose products of local origin, buy only what you need, and compost the leftovers by yourself or hand them over to utilities (so far, this possibility exists in several cities). The second is to encourage businesses to optimise production processes, invest in the rational use of resources and not stimulate overproduction. Third, utilities must switch to organic composting. This applies not only to food waste, but also, for example, to fallen leaves. The latter is possible if a separate waste collection system and a recycling programme are launched in Ukraine.

Nowadays, there is a kind of war between people and household and industrial waste. Unfortunately, garbage wins this battle. In Ukraine, all protected areas occupy about 8% of the territory, while landfills, more than 9%. Note that there are 6,000 official landfills in Ukraine, which have accumulated more than 12.5 billion tonnes of waste. This is a mountain of 10 km high! According to unofficial data, this is only a tip of the iceberg, as there are more than 35,000 unofficial landfills in the country.

To improve the environmental situation, it is necessary to comply with the Law of Ukraine “On Waste Management,” which has been in force since January 2018, as well as to strengthen the responsibility of producers for waste collection, recycling and control. In addition, it is required to create an electronic register of landfills, including illegal ones, to start building incinerators with sorting lines.

Not to be suffocated by mountains of garbage, effective methods of its safe recycling must be introduced at the state level. The whole world benefits from this – both for energy and the environment.

At the same time, Ukraine has already started exporting food waste. In 2020, about five domestic companies began to export food waste to Europe. The waste is used there to make fodder for livestock or is processed into fertilisers.

MEP Andrius Kubilius: 10 Points for an Answer to Putin Threats