How Not to Fall under Sanctions: Ministry of Foreign Affairs of Ukraine Launches Campaign for Residents of EU Countries 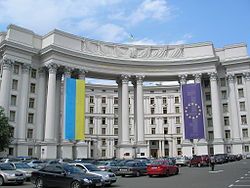 An information campaign called ‘Learn-Check-Act,’ launched by the Ministry of Foreign Affairs of Ukraine, is aimed at counteracting Russia’s attempts to legitimise its presence in the occupied territories of Ukraine through business, education, culture, and people-to-people contacts.

“The goal of the campaign is to convey to our European neighbours information about the importance of sanctions and to put an end to Russia’s attempts to use European politicians, businessmen, or artists to legitimise their crimes in the occupied territories of Ukraine,” said Oleksii Makeiev, the Foreign Ministry’s Special Envoy for Sanctions.

The campaign calls on EU citizens to take three simple steps to protect themselves from the risks of being sanctioned:

EU sanctions were imposed on the Russian Federation after its occupation of Crimea and parts of Ukraine’s Donetsk and Luhansk regions in 2014. Instead of adhering to the international rules-based system, the Russian Federation began to look for ways to circumvent sanctions and to legitimise its presence in the temporarily occupied territories of Ukraine. To this end, Russia uses economic, cultural, and bilateral contacts. It is also investing heavily in misleading the European public and business community by attempting to involve them in illegal deals in occupied Crimea.

The Ministry of Foreign Affairs of Ukraine invites international organisations, business associations, and foreign media outlets to support the campaign.

The partners of the project are the Mission of the President of Ukraine in the Autonomous Republic of Crimea, the Media Initiative for Human Rights, and the Ukrainian Helsinki Human Rights Union