The Coalition of Public Organisations, which includes the Commission on Journalistic Ethics, the Human Rights Platform, the Ukrainian Institute of Media and Communication, StopFake, and the Women in Media Association, conducted systematic monitoring of online media and Facebook coverage of local elections in Ukraine from 5 to 25 September 2020. The monitoring focused on 33 local online media and the FB pages of local election subjects.

Interestingly, the monitoring team fixed several trends. Hit piece (“ordered” materials) continues to be the central media problem of election campaigns. Online media in all regions that were monitored posted content with signs of orders by different political forces and mayoral candidates.

In addition, there was no mention of Russian aggression in some online media in Donbas in the coverage of hostilities. Instead of this, the information platform is provided to the pseudo-republics’ “DPR” and “LPR” representatives to express their version, which echoes the Kremlin’s narrative about the absence of Russian troops in Donbas.

Notably, each of the 12 regions selected for monitoring has its own unique media landscape and differs in economics, social characteristics, and political situation, which significantly affects the work of local newsrooms. Therefore, the level of media freedom in each region directly depends on the economic and political circumstances. However, most local media outlets face general problems with the difficult financial state, which has been further complicated by the general economic downturn due to quarantine measures for businesses during COVID-19. Being on the brink of survival local newsrooms have to resort, in particular, to dubious methods of earning during election campaigns, such as placing unmarked commissioned materials about candidates or political forces (hot piece).

The online media monitoring team noted the expression of disinformation narratives by providing a platform in the media to some speakers, in particular, representatives of the party “Opposition Platform – For Life.” They advanced theses on the need to lift the economic blockade of the DNR and LNR, to negotiate with them, discredit the Ukrainian army, legitimise the occupation of Crimea, and so on.

Some media spread the news from Russia and the occupied territories, which, in particular, promoted cultural products with propaganda messages: a book, a song, and so on. 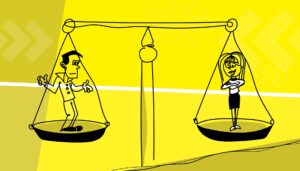 The monitoring data showed that the “Gender Equality in Politics” topic is among the three least represented topics in the regional online media, along with the “National Minorities” and “Crimea” issues, despite the introduction of gender quotas in the election legislation. Only nine materials, or 0.05% of the total, were devoted to discussing women’s political participation increase.

Monitoring shows that women are still a minority in the media. They received only 550 mentions, or 9%, in regional online media, while men received 3,308 mentions or 56%.

This means that the media continues to favour men despite the crying changes in society and the growing contribution of women to politics.

According to the results of the latest poll ordered by the Ilko Kucheriv Democratic Initiatives Foundation, together with the Razumkov Centre’s sociological service, from 14 to 19 August 2020 in all regions of Ukraine except Crimea and the occupied territories of Donetsk and Luhansk regions, only 6% of citizens received information about events in Ukraine and the world from regional online media. Instead, the premier source of information for Ukrainians remains the central Ukrainian TV channels (75%), social networks (44%), relatives, and friends (23%).