In recent years, many cases of pressure, persecution, and attacks on human rights defenders and civil society activists have been recorded in Ukraine. Most of the high-profile cases are kept in sight solely due to extra efforts of civil society. This situation is complicated by the lack of laws in the country regulating liability for attacks on public figures, and such cases are classified as general criminal ones.

In 2020, human rights defenders recorded 101 attacks and incidents of persecution of civil society activists in Ukraine. According to the ZMINA Human Rights Centre, the fight against corruption, protection of the rights of LGBTQ people, and environmental protection were the most dangerous types of activism.

According to ZMINA researcher Anastasiya Moskvychova, among the most common documented incidents were attempts to intimidate activists (22), physical assaults (21), and destruction of or damage to their property (18). In only four of the 21 incidents, suspected attackers were served with the notices of charges.

The authors of the report note that despite quarantine restrictions across the country, the number of cases of persecution did not decrease in 2020. Moreover, during this period, researchers recorded abuses of attempts to hold activists administratively liable for peaceful assemblies, though most of those protocols were revoked by the courts.

Activists are also often subjected to legal prosecution, and defamation campaigns are launched against them, with ten and nine such incidents in 2020, respectively. So, in February last year, the police, at the request of MP Andriy Derkach, opened proceedings over alleged embezzlement of $149 million in international technical assistance with the participation of the Anti-Corruption Action Centre (ACAC) and the patient-led Charitable Organisation “100% Life.”

In April 2020, a defamation campaign was launched simultaneously on various media platforms, accusing ACAC Head Vitaliy Shabunin and Head of the Coordination Council of Charitable Organisation ‘100% Life’ Dmytro Sherembey of “misappropriation” of funds. However, no evidence was presented in the media reports.

“We are drawn into 12 lawsuits and four criminal cases on fake charges. But all this is just a futile attempt to slow down the work of our organisation and shut our mouths. At the moment, we have a full-fledged plan of war and we will win all the lawsuits – nothing and nobody can stop us,” Sherembey said. 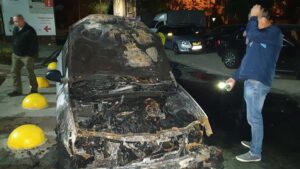 Environmental protection is one of the most dangerous types of citizen activism. In December last year, unknown people twice set fire to a hayloft at the Shcherbati Tsuhli stable in the village of Prybirsk in the Kyiv region, where a group of enthusiasts is trying to restore the almost extinct breed of Polissya horses. The injured environmental activist, Yuriy Yahusevych, who owns the stable and breeds these horses, links the arson to his publication, in which he drew attention to the work of heavy machinery on the banks of the Teteriv River in Prybirsk. According to the activist, after the publication was released, he began to receive verbal threats from the initiator of the works sent through different people.

Yahusevych believes that the inaction of the police and the refusal to initiate proceedings after the first arson made the attackers believe that they would get away with a new attack. “The police are a monopolist in the field of law enforcement, i.e., we still have Soviet totalitarian laws that do not provide a full-fledged opportunity for self-defence, starting from a ban on armed self-defence and ending with an inability to independently gather files and evidence for the court since it does not accept them from an individual or a detective agency. We are completely in the grip of the system that does not work,” the activist is convinced.

Human rights activists also recalled 12 draft laws that were registered in the Verkhovna Rada in 2020, the adoption of which would pose a threat to the freedom of association and peaceful assembly, provoke discrimination against human rights defenders and civil society activists, and promote the spread of homophobic ideas. Moreover, according to ZMINA legal analyst Olena Vynohradova, each of the bills could become a flagrant violation of international human rights standards and Ukraine’s commitments to the international community.

“At least a third of these bills are patterned after the ideas of our northern neighbor, the aggressor country, which fills not only the information space of Ukraine with its propaganda but also tries to cram its toxic ideas into our legislation. Therefore, it is crucial to talk about such bills so that the society understands their danger and realises the consequences of their adoption,” Vynohradova added.

Monitoring of Pressure on Human Rights Defenders in the Donetsk Region

Natalia Aliabyeva, a lawyer and coordinator of the Monitoring of Pressure on Public Activists and Human Rights Defenders in Donetsk Region project, said that victims from the region were mostly dissatisfied with the level of effectiveness of investigations into cases related to pressure, attacks, persecution of activists and civil human rights defenders, as well as the need to constantly motivate investigators by submitting applications and inquiries. As for the quality of investigations, it remains low. Therefore, the authors of the study emphasise that the attackers feel impunity. Victims of pressure, harassment, and attacks (human rights defenders and public activists) remain unprotected.

Problems and shortcomings of formal investigations that may indicate their ineffectiveness include the following:

For example, 10 cases were documented where applications were filed with the police, but only two of them were entered into the Unified Register of Pre-Trial Investigations. In practice, this excludes the possibility for a victim to seek help from law enforcement agencies. In addition to possible physical health problems as a result of the attacks, all activists suffered psychological trauma. And some of them also suffered material damage (destroyed houses or burned cars).

Unfortunately, today the inaction of law enforcement agencies prevents the victims from using one of the most effective mechanisms for obtaining compensation and restoring justice in Ukraine.