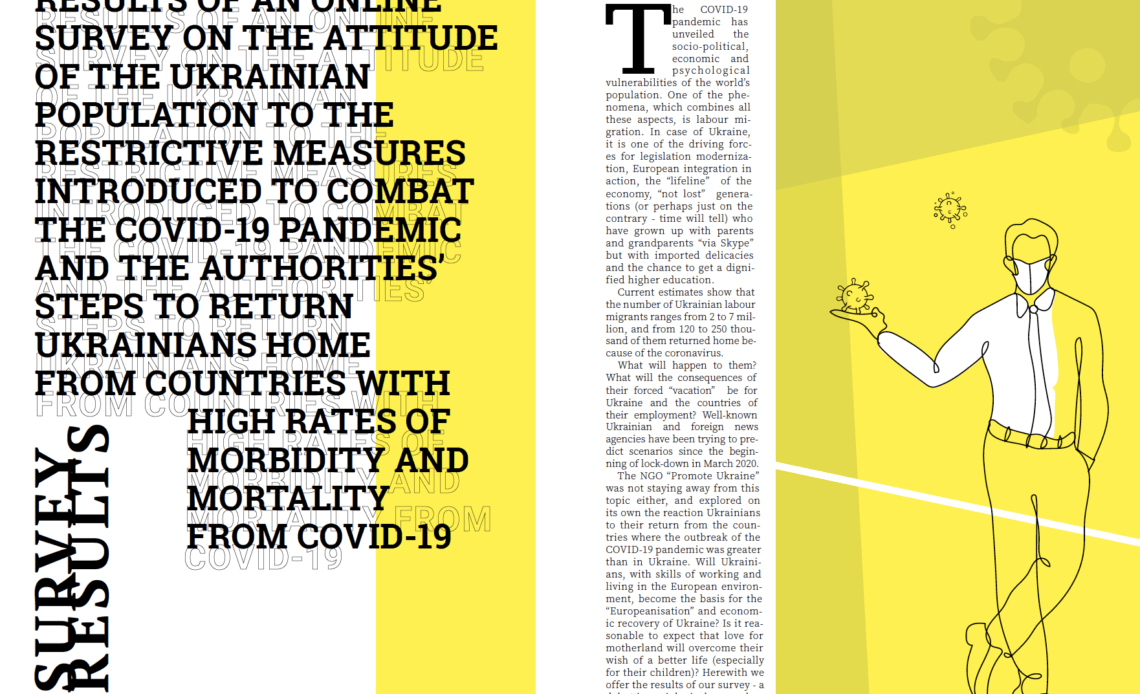 The unprecedented lockdown in the history of the civilised world caused by the COVID-19 pandemic has provoked a state of fear in societies, not only for health but also for one’s own economic well-being, freedom of movement and freedom of speech. It is a state in which both compassion and cruelty are manifested.

That was the perspective of the Promote Ukraine’s survey on concerns about the fear on movement of Ukrainian migrant workers, the possible consequences of their return (or non-return) for Ukraine and the host country.

We asked the audience, having no idea of what was coming next. But the comments and results are presented now, drawing on the experience and already implemented course of events.

The development of survey tools and information processing were provided by the Institute of Sociological Research at Kyiv National Economic University named after Vadym Hetman.

The sociological data obtained is descriptive in nature and reflect common tendencies on Ukrainians’ return home in times of pandemic; on the attitude of the Ukrainian population to the restrictive measures introduced to combat the COVID-19 pandemic and the authorities’ steps to return Ukrainians home from various countries.

So, at the beginning of May 2020, when the quarantine had bored us already, 75,60 % of respondents had the comprehensive awareness about the spread of COVID-19 in the world and constantly followed the news. 21,99% had little awareness about this topic, reading or watching the news occasionally. 2,06% of respondents had no awareness about this topic or didn’t follow the news. The highest interest was towards the situation in the city or town of the respondents’ dwelling  – 84,54%, though the concern about the situation in the region and country, in general, was almost at the same level –  82,47% and 82,82%, accordingly.

In the pre-pandemic era, the majority of respondents (17,87%) traveled abroad once in 6 months. 13,40% visited foreign countries once a year, 11,68% crossed the border once in three months and 8,93% did that once per month and even more often. 34,71% of the respondents have not been abroad during last 2 years.

The number of respondents who strongly feel sorry or somewhat sorry for those people who returned home infected with COVID-19 after a vacation is 34,02 and 29,55%, correspondingly. Thereby, 13,74% are indifferent to the problems, 8,93% feel no sorry for the issues and 13,75% did not care, until they or their family and friends would not be infected.

Conspiracy sentiments about the coronavirus pandemic have been traced in 40.21% of respondents. This number of the survey participants considered COVID-19 to be something diverting attention from real problems of the planet.

17,87% were sure that COVID-19 pandemic is a scenario of geopolitical redistribution, and for 11% it is a catalyst for change in the socio-political and economic system of the G20. Almost one third of the respondents (30,93%)) think that it is just a pandemic.

In the 20th century, Ukraine was regarded as a breadbasket of the USSR, having been turned into the source of labour migration after its dissolution. As it was found out by the experts in 2017, about 3,2 million of Ukrainians have been constantly working abroad, with this figure increasing to 7 and even 9 million seasonally.

Labour migration obviously has had a positive impact on Ukraine as well: just in 2018, money transfers to Ukraine reached the point of almost 10 billion US dollars. That equaled 8% of the country’s GDP, as it is mentioned in the research “Labour Migration from Ukraine: Change of a country of employment, increasing macroeconomic impact” conducted by the German Consultation Group in Ukraine, in February 201).

According to the World Bank, in 2019, Ukrainians transferred a record-breaking $15,8 billion to Ukraine, which equals 10,5% of the country’s GDP.

As the Prime Minister of Ukraine Denis Shmyhal stressed in the interview to the information agency “RBK-Ukraine,” the Government is interested in employment of Ukraine’s citizens in Ukraine. “We would like to have labour migrants come back home from all over the world. During the quarantine period about 2 million people – guest workers – came back to Ukraine because they lost their jobs. We consider these people highly-qualified and trained in the Europe labour force, which is characterised by high productivity and is well-trained technologically and professionally.”

Do the authorities’ expectations attune to the intentions of average citizens – the respondents of this survey?

27,84% consider the Ukrainian authorities’ decision to repatriate Ukrainians from countries where the COVID-19 pandemic outbreak took place to be just a public relations (PR) stunt; for 16,84%, it is a mistake. 22,43% take this decision for proper and humane one and, for 17,87% , it’s a deliberate, unpopular measure to support the country’s international image.

Moreover, for 41,58% respondents, it would be logical and safe for their relatives in Ukraine if “guest workers” remained in their host country and applied for visa extensions and other permits for the duration of the pandemic. 27,15% think that it would be better for migrants to stay in their hosting countries because medicine in Ukraine is less prepared for the current situation. Only 2,41% support their return home to Ukraine because it is safer and there are fewer cases of COVID-19 in Ukraine.

The answers to the question “Do you think that Ukrainian guest workers, who have experienced Europe and have had the skills of working and living in the European environment, to become the basis for the “Europeanisation” and economic recovery of Ukraine?” have been distributed in the following way:

74,57% were sure that labour migrants would return to Europe for work as soon as the borders were opened again. 17,18% thought that they have been working just to meet their own family needs. The absolute minority of respondents believed that guest workers would inspire their Ukrainian neighbours to work as in Europe, and that will help the country to develop its European vector (1,37%), and just 2,75% hoped that for years labour migrants lived and worked in more favourable conditions, and now they can reproduce them in Ukraine. 4,12% are not sure about the role of guest workers in the “Europeanisation” and economic recovery of Ukraine.

33,33% think that the return of “guest workers” home will worsen the economy of Ukraine and cause problems in the hosting countries. 17,87% are concerned that migrants’ homecoming will negatively affect the development of the Ukrainian economy. 18,56% are sure this issue is not related to official indicators of economic development of Ukraine and 15,12% limit this problem to the workers and their families.

How will the European labour market react to the labour migrants drain? Will this drain cause the reorientation of Europeans to self-sufficiency (meeting their needs with their own labour market in the niches where Ukrainians worked)?

15,46% thought that the European labour market will be inflicted because the borders will not be as open as they had been before the pandemic: the fear of the next wave COVID-19 infection will prevail in the near future. But 74,57% presumed that Europeans are not used to working in the spheres guest workers agree to work, nor are they willing to accept such low salaries. Only 0,69% respondents believed that Ukrainians will not return to Europe to work again.

The results of this survey are tough, unvarnished, and illusion-free. Life as it is. Euroscepticism is a trend among one third of the respondents: for 11% the pandemic has revealed the weaknesses of the EU and that is not what Ukraine needs, and 25,77% are sure that the world will no longer be the same as before the pandemic and it will affect Ukraine’s European integration course.

The only consolation is as follows. COVID-pandemic challenges will not erode European integration intentions of Ukraine: COVID-19 will eventually pass, though other problems of an economic, political, and cultural nature will remain, and they are waiting to be solved. That is the point of view of 41,58% respondents. Moreover, 12,37% are convinced that only together, and through coordinated and synchronised action, peoples and nations can overcome manmade and pandemic challenges, and COVID-19 confirms this.

And what do YOU think? The discussion on this topic is both welcome and expected.

PODCAST: Impact of War and Pandemic on NGOs