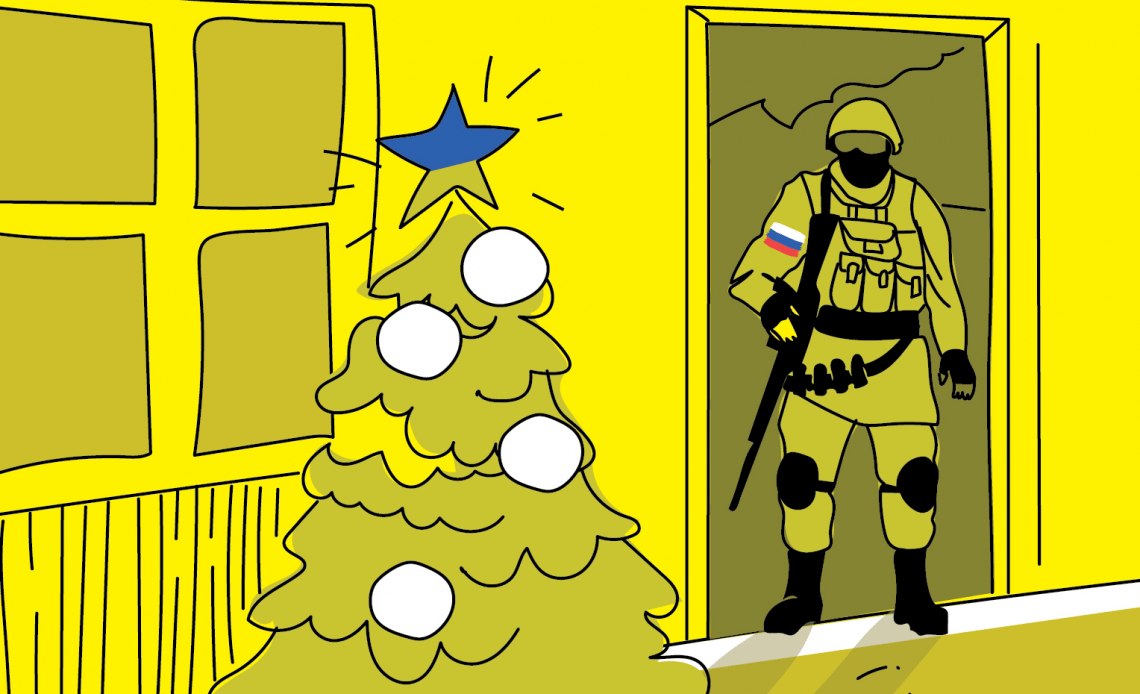 There is little doubt among security, political and economic (more precisely energy) experts that the recent Russian buildup of military forces on the border with Ukraine is geared to advance the Kremlin’s sinister agenda. The difference of opinions boils down to scale, means, timing and geography. To strike when the international community and Ukraine itself are  the most vulnerable, and the least ready to retaliate, is Putin’s matter-of-course intent. However, the timing of when this “perfect storm” will be at its peak to enable Russia to act on the offensive – depends on multiple factors. What follows below is a short review of key domestic and international developments that can either untie Putin’s hands or hamper his “blitzkrieg,” at least in the foreseeable future.

Ukraine’s economy is struggling hard to keep afloat and carry its citizens through the increscent economic meltdown. Necessity to revert resources to military preparedness and looming political instability on top of healthcare system challenges add up to citizens’ impoverishment, disorientation and fears of the future. Evidently, Russia is standing behind, if not with the inception of all these processes, then at least with pressing on sore spots and misrepresenting the severity of the situation, thus making Ukraine deteriorate even further. Ukraine, weakened internally, is less likely to effectively counteract the enemy externally. This is the reason for Ukrainian authorities to actively seek commitment to all encompassing assistance from foreign states and international organsations. Nonetheless, NATO’s military presence on its eastern flank, as well as allies’ training and arming of Ukrainian armed forces instead of making Ukrainian stand firmer and ready to deter Russia, lead to the opposite: lately Putin has pronounced those as being inacceptable, as he perceives it as Ukraine’s de facto military integration into the Alliance structures. Such uncompromising rhetoric disincentivises the West to make stronger and concrete commitments because more than helping out Ukraine, it is not willing to fight Russia, even indirectly through merely equipping Ukraine. NATO SG Stoltenberg’s declaration affirming that the Alliance has no obligation to defend Ukraine is one in a series of statements to the same effect. As a result, Ukraine’s internal developments, as well as insecure support by international partners, embolden Moscow’s daring behaviour.

The Nord Stream 2 gas pipeline is certainly one of the if not THE major factor affecting Putin’s plans on invasion. The pipeline’s main objective has been to bypass Ukraine in gas transit to the EU, notwithstanding its economic and logistical redundancy. Its construction was completed in September 2021, and if certified by the regulators, it will not only cause billions of dollars worth of losses for Kyiv, but will also remove the last “stumbling block” for Moscow in attacking Ukraine. The hope that the international community won’t let it happen has not died yet, but fades away by day.

The Biden administration, which took office when NS2 was 95% complete, has substituted its efforts to cancel the project with endeavours to mitigate the risks should Putin continue to weaponise gas supply. The matter rests now with the Congress that retains sanctions as an amendment to the annual National Defence Authorisation Act. If they are scrapped, then all decision power will bounce back to Europe.

In Germany, the outgoing Merkel administration makes efforts to bring the NS2 pipeline to fruition, while MFA-to-be Baerbock sends signals that her cabinet won’t give in to Russia’s demands. However, the issue is still unsettled and much will depend on Germany’s internal political dynamics as well as any developments around Russia’s obligation to comply with the European Union’s anti-trust laws and regulatory restrictions. If no concessions are made on part of the EU regulator and no satisfactory Gazprom unbundling (decoupling the owner of pipeline and the owner of gas it transports) is made on part of the Kremlin, then we might evidence temporary holdbacks in Russia’s offensive. However, should Putin cunningly find ways to overcome the NS2 certification hurdles, then alerts about Moscow’s flexing of the muscles will cease being a political threat only and will most likely transform into military intervention.

Self-proclaimed President Lukashenka has been giving headaches to the EU for a number of years already. His recent Russia-backed “escorting” of African and Middle East migrants who flew into Belarus directly to the EU external land borders, however, presents a new level of hazard. Unfortunately, as experience has shown, the EU member states have still not come to a common understanding on how to deal with illegal migrants, refugees and asylum seekers and organise burden sharing fairly, effectively and efficiently. Therefore, even the relatively low numbers of migrants (compared to 2014-2015) cause a lot of tension not only among the states under pressure, but also to the rest of the EU bloc.

First and foremost, the EU’s hitches scatter its attention; secondly, they point to disunity, which plays into Putin’s hands, and thirdly, they allow Lukashenka to shamelessly show his true allegiance. Seemingly being his own man for a long time, now he appears to be progressively shifting to becoming Putin’s puppet and accepting Russia’s cripping anschluss of Belarus. Case in point is numerous bilateral military drills and merging the two armed forces’ capabilities. On top of that, Lukashenka has recently declared de facto and de jure recognition of Crimea as Russian territory and made it clear that he will fight on the Russian side in a potential war with Ukraine. All these developments point to the fact that Russia has been opening a second front in fighting Ukraine with Belarus’ help while the EU is struggling to get its act together faced with recurring migration challenges.

US weakening foreign policy which Russia takes advantage of

Long gone are the days when the international community was raising glasses of champagne celebrating Biden’s instalment in the presidential office. From the get go it became quite apparent that the number, scale and geographic diversity of challenges disable the US to properly tackle them all. Biden’s willingness to establish “predictable adversarial relations” with Putin to clear the way for dealing with emerging geopolitical threats from China proved to be both a hasty and a wrong move. His further miscalculations on the Afghanistan withdrawal, attempts to re-engage with Iran to prevent it from aquiring a nuclear bomb, as well as unheathy obsession with a two-state Israeli-Palestine solution, all contribute to Putin rubbing his hands. For Moscow, actions definitely speak louder than words. Therefore, neither the dispatching of CIA Director Burns to Moscow, aimed at cautioning Russia against invasion of Ukraine, nor public rumbling of Secretary of State Blinken on the margins of the NATO summit, achieve their intended goal thus far. On the contrary, planning for a second US-Russia Summit will likely serve as a “green light” for Putin to move on with his agenda among the West’s, and foremost the US, “deep concerns.” Should the US be serious about deterring Russia, it needs to act preventively and not merely talk harsh language to Russia’s authoritarian leader while he is plotting a massive attack in plain sight.

Other international events of major concern

If only it was possible to limit challenges and threats to manageable numbers and scale. Alas, it is not the case. China threatening to take over Taiwan (where most of the semiconductors are produced for worldwide usage), Israel preparing to either preventively strike its enemies seeking its destruction or at least retaliate and defend itself against its aggressors in the Middle East and beyond, as well persisting instability corroding a growing number of states in the Middle East, Northern Africa, Latin America etc., all contribute to making the situation precarious worldwide. And while no single occurrence is a sufficient enabler and excuse for Putin to invade Ukraine, the combination of at least a few detrimental developments are capable of knocking off the collective West.

The only conclusion is that any and every deteriorating situation is playing into Putin’s hands and enabling him to advance politically, economically and militarily in undermining western democracies with Ukraine on its forefront. To prevent the worst from happening it is necessary to act while it is not too late, namely to put an end to NS2, to provide Ukraine preemptively with military assistance on top of additional financial and technical resources  and to take more resolute measures in regard to other crises, at least in the EU neighbourhood, to exclude a possibility for Kremlin to attack from a few flanks at once.