The Unknown Story of the Famous UN Gifts

There is a tradition in the UN:  Member states donate a gift to mark their presence and demonstrate themselves somehow. Among the presents are sculptures, artefacts, decorations for the halls and more. In 1970, Ukraine donated a Reshetyliv carpet and a vase with Petrykivskyi paintings, which are displayed in a prestigious place near the Security Council hall. Once I had to negotiate with a delegation that intended to donate a TV. In reply to my remark that such a gift would become outdated quickly, the ambassador agreed to change the TV regularly to a newer one so that there would be a sign with his country’s name.

Gifts without a sign can get lost. There used to be several elegant armchairs in the Delegates Lounge. Delegates sat on their rails. Electricians stood on them to screw in a light bulb. Over time, the chairs began to look quite shabby. Only a few years ago, during the renovation of the UN building, it became clear that the chairs had been a gift from Denmark. The chairs were designed by the famous designer Hans Wegner and named “Peacock” because they resemble a peacock’s tail. The chairs were urgently restored and returned to the Dutch-renovated Delegates Lounge. In September 2013, the Queen of the Netherlands and the UN General Secretary unveiled the hall and even had coffee there, probably sitting in the same chairs. But soon after, Wegner’s chairs were taken somewhere “for further storage.” Where they were delivered afterwards was the subject of speculation by the delegates over coffee.

For the fistful of dollars

Usually, a donor country has to take care of its gift, but not everyone follows this rule. In the mid-1990s, due to the delays in contribution payments to the UN budget by member countries, it suffered from the financial crisis. There were not enough funds for much of anything. Then, the General Secretary reminded UN members about the duty to maintain their gifts in good condition. Canada, which donated seven entrance doors, decorated with cupronickel bas-reliefs of naked figures symbolising peace, justice, truth and brotherhood to the General Assembly building in 1953, took the letter as an insult and declared a formal protest. The Secretariat ironically called the demarche a “who`s to wash the boobs” incident. The shriek then was like one heard while cutting a pig, but someone had to wash the doors anyway. 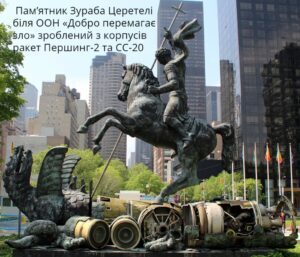 Moscow is the undisputed champion of gifts to the UN. In 1959, the USSR presented two gifts at once to the United Nations: the sculpture “Let Us Beat Swords into Ploughshares” by Yevgeny Viktorovich Vuchetich, a native Serb and resident of Katerynoslav; and a copy of the first Soviet satellite.

In 1990, the Soviet Union, which was already on its last legs, made a present of Zurab Tsereteli’s St. George on a horse sculpture to the UN. It was created from the wreckage of a Soviet and American missile and was supposed to symbolise that the Cold War ended. A workers’ team, sent from Moscow to install the monument, immediately christened Tsereteli’s “monster” with a well-known expletive.

The Soviet “masterpiece” was placed near two huge equestrian figures donated by the German Democratic Republic and Yugoslavia. When all three countries found themselves in oblivion, the UN wittily remarked that a state’s chances for disintegration are directly proportional to its gifts’ size, and a present of horses to the UN is a bad omen.

In 1995, President Yeltsin personally granted a copy of “The Tree of Life” sculpture by Ernst Neizvestny. The irony was that Neizvestny left the USSR in 1973 and was a US citizen at that time.

Finally, in 2010, when the overhaul of UN buildings began, Russia agreed to renovate the Security Council Consultation Room. The restored room style was described aptly by Edmond Mulet, a Guatemalan aristocrat who served as UN Assistant General Secretary for Peacekeeping Operations. At one of the first meetings in this room, he murmured into my ear, “Dacha,” (a country cottage), pointing to the carved “faux Russe” walls.

Usually, during the General Assembly, the United States “borrows” this room to use as a meeting room for its president. In 2015, when Putin was last at the UN, the two presidents met there. Russian propaganda then boasted that Putin and Obama met in the “the Russian delegation room.” But Obama agreed to receive Putin in the American delegation “field office.” The meeting was neither in the hotel where Obama stayed, nor in the American mission, as with a close partner, but “in a country cottage.”

A mask, I know you

Some gifts have a long way to travel to the UN and a challenging fate. The famous revolver with a knotted barrel, located near the UN, was created by the Swedish sculptor Carl Fredrik Reuterswärd, who was stunned by the murder of his friend John Lennon. The sculpture was first placed at the Lennon Memorial in Central Park. In 1988, the Luxembourg government donated it to the United Nations. There is a legend that Sweden asked Luxembourg to give their name and flag to the gift, as Stockholm considered it unethical to donate weapons similar to the one with which their Prime Minister Olof Palme was killed.

The sculpture was installed near the UN. And the U.S. Mission complained immediately that the revolver barrel was allegedly provocatively aimed at their windows. After difficult negotiations, the lawyers on both sides agreed that the knotted revolver should not create false allusions. The reaction of neighbours to UN buildings and monuments is a separate topic. For example, the Jewish public organization B’nai Brith protested because Tsereteli’s St. George monument across the road pokes a cross directly into their windows. 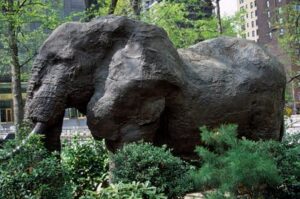 An even more difficult fate befell the joint gift of Kenya, Namibia and Nepal. The three governments took much pain to decide what would be a non-trivial gift. And, finally, they decided to present a sculpture of an elephant and commissioned it to Mikhail Simeonov, an American sculptor of Bulgarian origin. He already had an elephant plaster cast somewhere in a huge locker. Once on a safari in Kenya, he shot an elephant with a tranquilliser. While it was sleeping, he made its mould. So, when he received the order, he poured a bronze sculpture out of the mould and named it “Sleeping Elephant.” It was installed on a lawn in the UN park.

And everything would have been fine if not for a tiny (actually, not so tiny) detail: the tranquilliser had the Viagra effect on the elephant or, according to one of the project participants, ”Sleeping Elephant” just had “sweet dreams.”   The New York Times openly scoffed, “Mikhail Simeonov’s elephant looks like he’s going on a date with an elephant, and she’s waiting around the corner with Sinatra’s song on the radio and Martini’s bucket.” Less than a week later, the UN Secretariat was flooded with complaints. Local moms, who used to walk with their children along the UN fence, were forced to explain to their curious kids what an elephant has. Manhattan moms demanded the removal of the “obscene” sculpture ASAP.

But they were not the American mission lawyers, who did not compromise. A scandal was brewing, and it was necessary to prevent it somehow. An urgent meeting was convened. Everyone agreed that it was impossible to return the gift, hide it in the basement, or even move it to another place, as this would cause a diplomatic scandal.

The idea of cutting off the “obscene” detail was also rejected. The cursed sculptor had already said somewhere that he would rather correct Kofi Annan than an elephant. There seemed to be no way out. Suddenly, one of the meeting participants came up with a brilliant idea to surround the elephant with bushes! “It will look like in the wild.”

They made an immediate request (tenders be hanged!) to buy evergreen bushes and surround the cursed elephant with them by the next day (well, the day after tomorrow). UN services paid for the authenticity (the bushes were supposed to be real, African) and for the urgency of $60,000. They coped with the task. Since then, the elephant has been hidden in the bushes almost to the ears. And the path to the sculpture is also sown with grass now. “It is the same as the Iron Curtain or the Berlin Wall installation,” the sculptor indignantly claimed, but no one listened to him anymore.

In competitions of pure art with political expediency, expediency always wins. Probably, it is the reason why there is so much botchery in the UN collection. Meanwhile, the paintings for the General Secretary residence are selected not from their reserves, but borrowed from the Metropolitan Museum.