‘Trophy economy’ – Militarisation of Crimea as Factor of Industrial Growth

On 4 April 2014, at an unscheduled meeting of the Collegium of the Ministry of Defence of the Russian Federation, Defence Minister Sergey Shoygu announced his intention to make the industry of the occupied peninsula fully occupied with state defence orders, emphasising the importance of “effective use of the production and technological potential of the Crimean defence industry.”

In mid-April 2014, the Russian newspaper Kommersant reported that the Ministry of Defence had already made a list of 23 Crimean enterprises that are of interest to the agency. “This was done in order to fulfill the instructions of President Vladimir Putin, and the process is being supervised by Deputy Defence Minister Yuriy Borisov. Currently, proposals are being developed for the efficient use of enterprises,” the newspaper wrote, citing its sources in the ministry.

In turn, Borisov said that “we will start planning the workload of enterprises after passing through all the formal procedures, such as licensing and re-registration.” 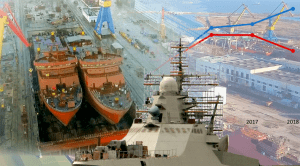 For two years, almost all Crimean defence companies have either already entered or are preparing to officially enter large Russian corporations, or have been leased to Russian companies, or at least have so-called “supervisors” in Russia.

The institute of supervisors was officially introduced in 2016. Decisions on their assignment to enterprises were made by orders of the Ministry of Industry and Trade of the Russian Federation. The supervisors were supposed to share orders with Crimean plants where they worked and modernise them. The official registration of supervisory responsibility by ministerial orders was terminated in August 2017 after another round of “Crimean” sanctions imposed by the U.S.

The assets stolen in Crimea since the occupation have undergone many metamorphoses: the names of some companies have changed, they have been transferred from one agency to another, and became joint-stock companies. Currently, the scheme of changing the ownership through “privatisation” of a block of shares is gaining popularity.

At the end of 2015, Crimea was declared “the leader in industrial production growth rate” in Russia (the growth in Sevastopol was 165.5% compared to 2014, and 127.2% in the “Republic of Crimea”). The industrial production in the occupied Crimea grew mainly due to the provision of Crimean enterprises with military orders.

In April 2016, the then Russian President’s envoy in the Crimean Federal District, Admiral Oleg Belaventsev, said that the defence-industrial complex, which included about 30 enterprises, was a strategic component of Crimea’s industrial policy.

According to representatives of the Crimean “government,” the provision of Crimean enterprises with orders was facilitated by the attention of Russian President Putin to the peninsula since “strong-willed decisions to place a large number of orders at the Crimean shipyards are made.”

However, it’s a difficult task to achieve the desired level of efficiency of the Russian-seized Crimean enterprises amid international sanctions and strong competition among Russian defence companies for state defence orders.

In October 2019, according to Head of the Crimean occupation government Sergey Aksenov, the workload level of the machine-building and shipbuilding enterprises in Crimea averaged 40%.

As a result of the occupation of the Crimean peninsula, the aggressor received 13 Ukrainian defence enterprises, which were part of the Ukrainian State Concern Ukroboronprom, as “military trophies,” namely:

Currently, 10 out of 13 enterprises are operating as separate legal entities.

The Monitoring Group of the Black Sea Institute of Strategic Studies and BlackSeaNews has so far identified at least 59 Russian companies that work with the seized enterprises of Ukroboronprom and a total of 149 companies cooperating with the Crimean plants in military production.