Ukraine Amazes: What Unusual Monuments Do We Have?

Did you know that there are unique and amazing monuments in Ukraine? For example, monuments to the dumpling, corrupt official, cucumber, loving couple, and hedgehog. There is even the monument to the nose of famous writer Mykola Hohol which, according to Kyiv residents, cures a runny nose.

What interesting and creative things can we show to the whole world? Promote Ukraine suggests taking an interesting tour of different parts of Ukraine.

Dumplings peculiar to the Poltava region – halushkas – are a traditional Ukrainian dish. Poltava residents like it so much that a large sculptural composition was installed in its honour in the regional center as a symbol of generosity and well-being. A memorial sign to the Poltava halushka was erected in 2006. It was dedicated to the birthday of famous writer Mykola Hohol, whose works glorified halushka all over the world.

This monument was unveiled at the festival “Salo Fans” in the town of Romny on the Humour and Fools’ Day in 2000. This is the first monument to a pig in Ukraine and Eastern Europe. A big, fat Ukrainian pig sits on a small pedestal, mocking at all people and their problems. The inscription on the monument speaks for itself: “From genuine Ukrainians.”

This monument is dedicated to the famous crispy Nizhyn cucumber, a symbol of the town of Nizhyn. After all, these cucumbers have been known since the time of Empress Catherine II. She ordered that Nizhyn cucumbers be brought to the royal court.

The monument was unveiled in 2005. It is made of green granite delivered from Italy. This Ukrainian cucumber weighs 50 kg and lies on a pickle barrel. The pedestal is built in the form of a cellar where pickles are usually stored.

Monument “Hedgehog in the Fog”

Everyone saw the Soviet cartoon “Hedgehog in the Fog” for certain. It was made in 1975. A monument to the same Hedgehog was erected at the intersection of Reytarska, Zolotovoritska, and Heorhiyivska streets in Kyiv in 2009.

According to the 2003 poll results, 140 critics and animators from different countries recognised the “Hedgehog in the Fog” as the best cartoon in the history of animation.

It was unveiled at the Passenger Terminal of the Odesa Sea Port on the City Day on 2 September 2002. The monument depicts a young woman, a mother, standing by the sea, holding a little boy. Together they look at the sea horizon, waiting for a ship with a beloved husband and father. The monument symbolises loyalty, patience, and love.

There is a monument in Kharkiv that consists of two figures – a girl and a boy. They reach out to each other in a kiss. Lovers and newlyweds take photos and kiss under the arch the figures form. This amazing monument gained incredible popularity immediately after its erection on 1 September 2002.

Monument to the first tram

It is no coincidence that the monument is located at the Volodymyrsky Descent in Kyiv as it was from this place that the first tram departed in 1892. By the way, horse trams and steam trams functioned in Kyiv before the appearance of the first electric tram. Initially, horses were harnessed to pull cars. Later, the first steam trams appeared. However, they could pull only one car, while making much noise and smoke, scaring carriage drivers and horses away.

The monument to the first tram appeared in 1992 to mark the 100th anniversary of the Kyiv tram.

Monument to the watermelon

In 2008, another original monument appeared in Ukraine – a monument to a watermelon. It is located in the town of Hola Prystan, in the Kherson region. This town is considered the capital of watermelons as half of all Ukrainian sweet berries are grown here. From here, they are delivered to different parts of Ukraine and European countries.

The monument looks like a real watermelon with a piece cut. It is made of concrete and is 1.75 metres in height and 1.20 metres wide.

A monument was erected during the annual festival “Ukrainian Watermelon – A Sweet Miracle.”

The monument to a backpack is located in the yard of the Geography Faculty of the Ivan Franko National University of Lviv. It was unveiled on 14 May 2012 as a symbol that unites all people.

The monument is almost two metres high and is absolutely similar to a modern tourist backpack, which contains everything a person needs.

The monument appeared on the Turetska Square in the city of Chernivtsi on 20 October 2009. The main part of the composition is an image of a coin 90 centimetres across. To the left, there is a sculpture of a hand pushing the coin to the opposite side of the monument, where two palms are already waiting for it.

The coin weighs 90 kilogrammes, and the entire monument reaches 250 kilogrammes in weight. 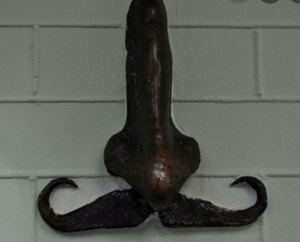 This funny bronze monument has been located on the Andriyivsky Descent in Kyiv since 2006. It was created as an illustration to Mykola Hohol’s famous work “Nose” and it is also dedicated to the writer himself.

There is a legend that Mykola Hohol was caught in the cold rain, while walking along the Andriyivsky Descent, and got an unbearable runny nose. Therefore, he could no longer think of anything but his own nose. That’s when the idea for the “Nose” short story arose.

Now, according to local guides, one can quickly recover from a runny nose after holding on to “Hohol’s nose.”

So, visit Ukraine and check out the magical effect of local original monuments.