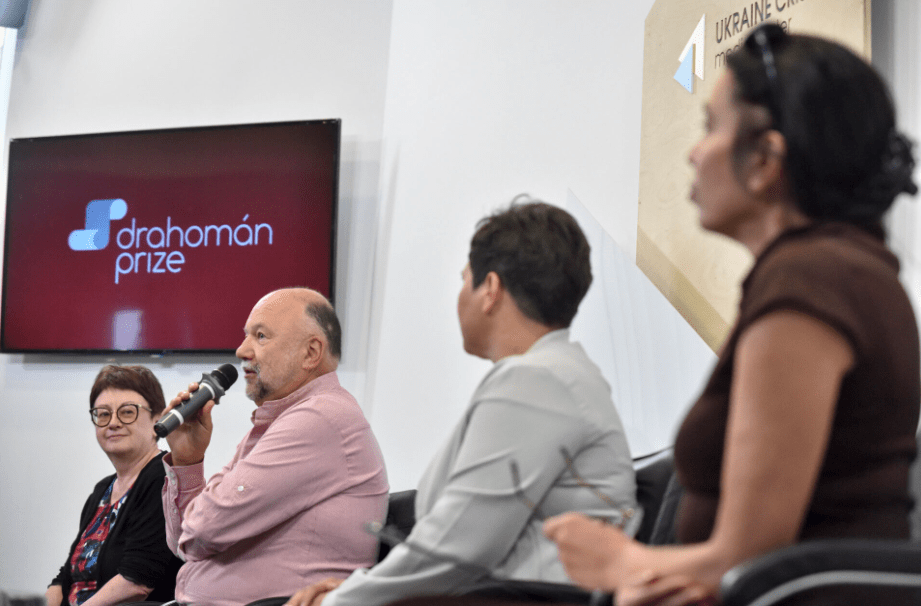 On September 24 in the Ukraine Crisis Media Center the three co-founders of the new award for translators presented the concept of the Drahoman Prize.

This Prize is created to support and acknowledge work of foreign translators who unearth Ukraine’s literature to the world, and thus Ukraine, recreated in works of its authors.

Andriy Kurkov, President of PEN Ukraine, informed that the Drahoman Prize will be awarded annually for excellence in translation and contribution to the promotion of Ukrainian literature abroad.

“Culture and particularly literature are uber-important instruments of representing the country. If you don’t know the country’s culture, you don’t know the country itself,” stated Kurkov. “Since the beginning of the Independence, this has been clear for Ukrainian writers, as well as those foreign translators who for various reasons came to love the Ukrainian language and culture, and were ready to put efforts nearly for free in order to make the best works of our authors accessible to foreign readership. Today, when Ukrainian writers are translated in dozens of countries, it is high time to support translators from the Ukrainian language not only morally, but through such great impetus as a particular award. It will not only encourage them to closely follow the Ukrainian literary process, but will help draw the attention of beginning translators, who haven’t yet made their final choice, to translation from the Ukrainian language. A translator is an institution-person who works for the chosen foreign literature throughout life. We want the Ukrainian literature to be chosen as often as possible and thus, more popular across the globe.”

Names of judges selecting finalists and laureate of the 2020 Drahoman Prize were revealed during the press conference. They are:

Nomination of the translator can be submitted by the judges, as well as foreign cultural institutions, research centers, publishers, and creative associations.

“A translator is an important figure in diplomatic relations. Therefore, for the Ukrainian Institute being an institution of cultural diplomacy it was natural and logical to become a co-founder of the Drahoman Prize,” Creative Director of the Ukrainian Institute Tetyana Filevska clarifies. “A translator is often an invisible but crucial participant of negotiations, official visits, working meetings, and it is always not just translation from one language to another, but from one culture to another. Dragoman was a person who historically served as a diplomat and translator, and there is a reason we named the Prize this way. In our time the sphere of cultural diplomacy cannot exist without qualified translators and qualitative translation. Through the Drahoman Prize, we want to acknowledge the role of translators and their responsible mission in establishing cultural connections for Ukraine to speak the same language with the world.”

Tetyana Filevska revealed that the Drahoman Prize laureate will be awarded a statuette made by a prominent Ukrainian sculptor, as well as a reward of 2000 EUR (taxes included). Moreover, the winning translator will get additional opportunities related to job and promotion of his/her own works by the Ukrainian Institute and the Ukrainian Book Institute. It may be participation in translation residencies, international fairs and festivals.

“Logically, the next step was to reward translators,” Oleksandra Koval underlined. “The Ukrainian Book Institute will be delighted to take on the organisation and cover the awarding ceremony for the Drahoman Prize. We will allocate funds for this in our budget. Starting from 2022 we would like to launch an international congress for translators from the Ukrainian language. I believe that in a few years, thanks to our mutual efforts, the number of our translators globally will dramatically increase, for being a translator from the Ukrainian language will mean being a guide of the powerful, universal, original and interesting to all people on the planet literature.”

The professor at the National University Kyiv-Mohyla Academy and University of Warsaw, Vice President of PEN Ukraine Ola Hnatiuk described the nomination conditions for the Drahoman Prize.

The Prize is eligible for all translators, regardless of their country of residence, who have at least one translated and published either fiction or nonfiction book. Fiction or nonfiction works include prose, poetry, drama and documentary editions (essay, reportage, interview, biography and memoirs). The nominated book of the translator must have been published abroad within the last three years.

Submissions are accepted from September 24 to November 30. The submission must consist of electronic and paper copies of the nominated book, as well as the duly filled-in submission form: https://bit.ly/32xbhiN

The name of the 2020 Drahoman Prize laureate will be announced at the awarding ceremony with the three Prize finalists invited. The event will take place in Kyiv in April next year.

For more details about the Prize follow the link: https://bit.ly/33R16Fj