Ukraine is unique. Patriotic education in Ukraine is actively developing. It will show the most significant events in Ukrainian history of the 20th century: the First World War, the October Revolution, the Holodomor, Stalin’s repressions, the occupation of Kyiv in 1941, the Babyn Yar tragedy, the Chernobyl disaster, the collapse of the USSR, the declaration of independence, Euromaidan and the current Russian war with Ukraine. 300 Ukrainian actors starred in the historical, 12-episode film “Saga” directed by Dmytro Laktionov, and more than 500 exclusive costumes were created for their images. By the way, the youngest actor was six months old.

“Saga” is a story about the life of a Ukrainian family of Cossacks. It begins in 1914 and lasts until 2014. Six generations of one family witness and participate in all the most important, tragic, joyful, and significant events of the last century in Ukraine.

”Saga’ concerns the life of almost every Ukrainian. The actors came to the stage and said that a lot coincided with the lives of their families. This series is a drama consisting of events, which the heroes experienced together with Kyiv and the country as a whole,” says the director of the series Dmytro Laktionov. 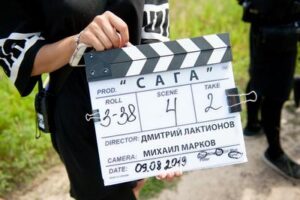 The program was shot in more than 70 unique locations. The series “Saga” was filmed in Kyiv and in picturesque surroundings. Here the creators managed to recreate the events that took place in Luhansk, Kharkiv, Lviv, Odesa, Truskavets. Among the locations are not only historic streets of the capital, but also apartments, museums, the Writer’s House, the Opera House, the October Palace, the Museum of National Architecture and Life Pirogovo, the Museum of Folk Architecture and Life of the Middle Dnipro Region, Uvarov Estate, Volodymyrska Hill, research institutes and other places.

Various Ukrainian military-historical clubs also contributed to the filming of “Saga.” Not only did they provide original military paraphernalia and even transport from their collections, but some members of the clubs appeared in the mass scenes of “Saga.”

Among the significant moments of Ukrainian history, the creators of the series will show the two-year occupation of Kyiv in 1941. The filming of the German army coming into the Ukrainian capital took place on the 77th anniversary of this sad event. Many of the actors involved in the film admit that their relatives were also injured during World War II. Thus, actress Hanna Adamovych’s great-grandmother died during the bombing, and actress Lilia Tsvelikova remembers the stories of her loved ones about the Holodomor.

“When the war started, my great-grandmother was small. She told how the family cut bread and divided it into many small pieces to somehow stretch to receive the next rations. Everything that happened then made people want to save their family. Not to give up, but to accept the circumstances and try to survive,” Tsvelikova told.

The family of actor and director Dmytro Goldman also has tragic stories related to the war. “My paternal grandfather died in the war. And my grandmother worked all day. From my father’s stories I remember the evacuation. Wild cold. Barracks, dining room, where people are fed for free.

Everyone ate without undressing: in earflaps and body warmers. And a man dressed in a coat came to this dining room. He took it off, sat down at the table and ate the potato peel. And then it turned out that it was Pasternak,” Goldman told.

Interesting facts about the series “Saga”: 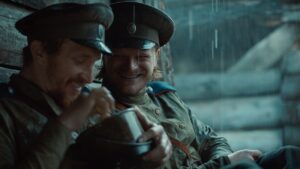