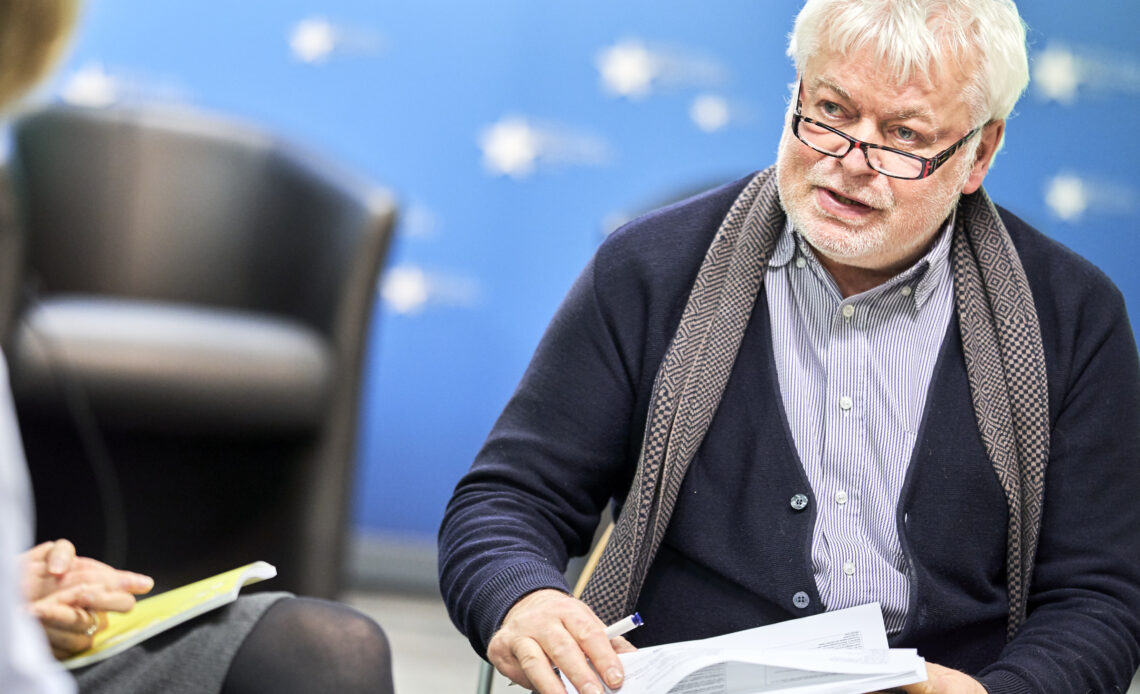 How to network efficiently to benefit Ukraine

One of the cofounders of the German Greens and the first Green German Member of the European Parliament – Frank Schwalba-Hoth – is known in Brussels as the “The King of Networking”. For more than 30 years in the EU’s capital, Frank has developed a great variety of projects, organised dozens of conferences, and helped hundreds of people bring their inspiring ideas closer to policy-makers. He also organises events, which connect people of different nationalities and backgrounds, because he believes that “one person alone cannot change the world for better, he/she needs to communicate with others in order to do so.” Moreover, every month he recruits young people from all over the world as his interns; they go to various events in Brussels, meet high ranking politicians and famous social activists, and learn from Frank’s stories. Frank is adamant that one month in Brussels can be a life-changing experience for everyone.

As the capital of the European Union, headquarters of NATO, and home to many other international political and business organisations, Brussels remains one of the best places to advance new ideas that benefit the whole world. The city has even bigger value for developing countries, which try to catch up – and keep pace – with democratic and economic developments. Therefore, making its voice heard in Brussels is crucial for Ukraine – a country that aspires to adopt European values and seeks closer integration with the EU. There are a number of Ukrainian organisations working towards this goal in Brussels. Apart from official diplomatic Ukrainian missions to the EU and NATO and its embassy in Belgium, Ukrainian organisations including the Ukrainian Think Tank Liaison Office, Promote Ukraine, Ukrainians in Belgium, EU – Ukraine Business Council, and more operate from the Belgian capital. Some of them concentrate on cultural matters; others are struggling to become influential actors in EU – Ukraine political relations. There are also a number of individual Ukrainians who have taken on the responsibility of promoting Ukraine in the EU’s capital through their work in politics or business. As the most active period of Ukrainian lobbying in Brussels started only after Euromaidan, Ukrainians still have many lessons to learn. We asked Frank for his tips on how best to use the lobbying opportunities Brussels affords – like the possibility to influence EU policy towards third countries – for Ukraine’s gain.

Frank stresses that the European Union’s policymaking is very much based on consultation. The EU’s quasi-government – the European Commission – regularly consults stakeholders such as associations and unions before and during the process of drafting new policy or legislation. Importantly for Ukraine, most of the organisations, associations, and think-tanks in Brussels allow partners outside the European Union to be full, associate, or visiting members. For example, the largest networking opportunity for those working on environmental issues in Brussels is the European Environmental Bureau (EEB) – a network of some 150 environmental NGOs. Some non-EU countries have partnered with the EEB, including, for example, the International Environmental Association of River Keepers from Moldova (Eco-TIRAS), a full member of the EEB. The most experienced Eco-TIRAS member is even on the EEB’s board.

According to the “King of Networking”, Ukrainians are not yet linked to these trade or professional associations, think tanks, or civil society organisations because Brussels, even more than Geneva or New York, is a place of proactive behaviour. He says: “In my experience, being proactive in an institutional way is not something which is a part of the genetic structure of post-Soviet culture.” Frank Schwalba-Hoth himself is always open to the new opportunities life gives us. While walking in Brussels, he looks around and, if he sees something interesting, he does not miss the chance to stop (even when he has an appointment somewhere else) and introduce himself and meet somebody new. He actively spreads business cards and takes ones in return.

While Frank and I walk in the European Parliament, he greets various MEPs, their assistants, and even total strangers. This extraordinary person is always open, happy, and free in communication with new people. He is passionate about integration, uniting the most diverse people one can imagine, and teaching them to work together. Frank continues: “Ukrainian associations or NGOs should start with examining the organisations in Brussels in their field of expertise to which they can become attached – in the case of universities, there is a European University Association, for trade unions, there is a European Trade Union Confederation, etc. Participation in these organisations isn’t necessarily based on membership fees. Most of these associations are interested in having geographically broad participation. They don’t always charge a company, university, or other organisation from Ukraine the same fee as they charge members from France or Germany.”

According to Frank, there are four advantages for a Ukrainian organisation to lobby as part of an existing group in Brussels:

Frank continues: “The best time to visit Brussels is certainly when a lot of things are happening here in your area of expertise. All of these associations have general assemblies – meetings of their members. That would be the right moment to come, but not only for that meeting. It is certainly productive to stay two or three days more in order to intensify your contacts with those people you met at these conferences. You should also use the opportunity to meet officials in the European Commission and committee members of the European Parliament working on Ukraine etc.”

After our short time with Frank Schwalba-Hoth, we start thinking that the world would be a better place if every person with different views was as open as Frank is to communicate with others.

We exit the European Parliament and, seeing a new exhibition, we catch ourselves thinking “No time; go home!”, but instead start to see it as “This may be an opportunity for something!” We get closer, have an enjoyable time, and exchange business cards with other participants. It might be difficult to leave our small comfort zone, to meet new people, and to approach strangers, but this is what our global world is about nowadays. To become a fully democratic country open to global opportunities, Ukraine has to follow this path as well. As we have explored, working, and developing amazing projects in Brussels requires a proactive approach, enthusiasm, optimism, and openness.

Hopefully, by using these recommendations and the opportunities which the EU-Ukraine Association Agreement provides, there will be more and more Ukrainian stakeholders in Brussels who will bring Ukraine closer to the European Union.