What Business Do Ukrainians Hide in Cyprus?

In the Cyprus register, small companies in real estate, trade and finance are the most common among Ukrainian representatives. Such conclusions were reached by YouControl analysts in a study of business relations between Ukraine and Cyprus. What else do Ukrainian “Cypriots” do, why do they register business there and what are the import-export relations of the states?

Cyprus. An island nation in the Mediterranean. It is associated not only with the sea, ancient ruins or spectacular nature. Cyprus is one of the jurisdictions often used by entrepreneurs and oligarchs to register their businesses. That is why YouControl experts added the opportunity to obtain data from the Cyprus register in the analytical system and conducted a study of Ukrainian business in Cyprus.

The Republic of Cyprus remains one of Ukraine’s most important financial partners. According to the National Bank of Ukraine, in 2019 the main source of foreign direct investment in Ukraine’s capital was Cyprus with more than $16 billion, which is almost $3 billion more than in 2018, and accounts for about a third of all revenues. This figure crossed the $16 billion mark for the first time since 2014 and is approaching the record level of 2013, when direct investment in capital from Cyprus exceeded $17.7 billion. Economists explain this by saying that this investment is actually from a return of Ukrainian money withdrawn in the form of dividends or repayable financing from parent Cypriot companies. 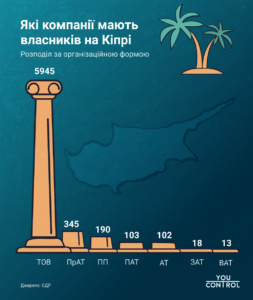 But how does Cyprus directly affect Ukrainian business? Why does most foreign direct investment in capital come from this country? The answer here is quite simple. Cypriot companies are present in about 30% of legal entities with foreign founders and are the most popular place among other jurisdictions. Almost one percent (or rather 0.86%) of limited liability companies of various forms of participation has a Cypriot company in the founders or beneficiaries. In private joint stock companies (PJSCs), this figure is much higher – the Cypriot “footprint” is visible in the fifteenth PJSC, mostly in the areas of heavy industry, insurance, real estate and communications. Lawyers explain the presence of Cypriots in joint-stock companies by saying that these are echoes of privatisation in the 1990s, and that Ukrainian oligarchs are mostly behind these Cypriot companies.

The role of Cypriot companies has changed dramatically since the turbulent 1990s, when they first began to appear in the structure of Ukrainian enterprises. If at that time the real owners of enterprises were hiding in offshore jurisdictions, now Cyprus is more of a “window to Europe.”

“Cypriot jurisdiction for business has several advantages,” said Olena Shcherban, deputy executive director of the Center for Combating Corruption. – First, it is a historically low tax rate. It was recently raised to 12.5%, but still remains the lowest in Europe, making it convenient to withdraw capital to Cyprus. Secondly, Cyprus uses English law, which is very convenient and clear for business to structure assets. Third, there is a certain regime of secrecy for companies and their owners, as well as the ability to distribute companies on a sectoral basis: one Cypriot company – one industry.

All these factors provide a high level of investment protection. And provide the opportunity to withdraw funds further to other jurisdictions.

“Separately, we can note the long-standing habit of Ukrainian oligarchs to register business in Cyprus, but not for anonymity, but to protect it from possible arrests in criminal proceedings or raids,” added a representative of the Center for Combating Corruption.

Real estate and finance are safe

Who makes the most use of Cypriot jurisdiction? It is traditionally believed that these are large companies that are part of the financial and industrial groups of Ukrainian oligarchs. However, after analysing the revenue of companies with the presence of Cypriot capital, it is noticeable that almost a third of the companies on this list are small businesses with revenues of up to two million euros. But large and medium-sized businesses with affordable indicators occupy only one-sixth, distributed equally. The rest of the companies did not provide data on income received in 2019.

Lawyers explain this by the fact that many medium-sized enterprises break up their business to ease the tax burden, and thus the real share of small business is much smaller. And it is the Cypriot jurisdiction that allows middle-class companies to insure against possible raids.

At the same time, if we pay attention to the profile of activity, the most popular Cypriot jurisdiction is in the real estate, trade and finance companies. Business analysts interviewed by YouControl say that the specifics of the work of companies that provide services in the field of finance, requires the need for security of the company so that people who trust their funds to these companies can be sure that nothing threatens them.

These same companies can get loans cheaper – through the parent Cypriot company. The interest rate in international banks for Western companies is much lower. Therefore, a Cypriot firm can take a loan at a lower interest rate and allegedly “borrow” it from a Ukrainian one, reducing the cost of servicing the loan.

The situation is similar with other industries; it is easier for a trade organisation with Cypriot roots to attract financing on international markets and minimise the tax burden, and the real estate rental and construction market can reduce the cost of construction by attracting cheaper money.

In total, according to YouControl analysts, according to the Unified State Register of Legal Entities and Individual Entrepreneurs and Public Associations (USR), there are 1,896 real estate companies, of which 1,302 are engaged in real estate management and 594 in construction. In trade, out of 1,116 surveyed companies, only 163 reported activities in the retail segment, the rest – wholesalers and intermediaries in the wholesale trade of any goods – from cars and machinery to alcohol or clothing.

The most interesting and fragmented was the financial segment. Of the 326 companies, 107 provide financial services, 66 operate in the field of securities, 44 are insurers, and 34 companies offer various financial services. Another 39 companies are various trusts and funds, 31 companies provide leasing services, as many – other types of lending. Cypriot roots have also been found in five credit bureaus.

But the leaders in terms of revenue are companies that are part of large financial and industrial groups, and rather operate not in the field of services, but in the field of energy and raw materials. Two out of 10 leading companies operate in the field of oil refining, one in the energy market, two more are closely related to metallurgy. The list includes the largest tobacco distributor, a pharmaceutical distributor, an air carrier, one of the largest grocery supermarket chains and an agricultural giant. The total revenue of this big 10 for 2019, according to YouControl analysts, is almost 384.4 billion hryvnias, which is more than a third of Ukraine’s budget expenditures for 2020.

Are financial flows between Ukraine and Cyprus really limited to investment and capital flows? No. Although Cyprus has not yet returned to pre-crisis levels in terms of exports and imports, trade with this Mediterranean country is really going well. A sharp drop in turnover occurred in 2015, after the Revolution of Dignity. But over the past five years, we can see a gradual increase – in particular, the resumption of exports and imports of services and a slight increase in imports of goods.

In 2019, our country exported the most transport, business and computer and communication services to the island nation, while in Cyprus it purchased the most travel, financial and business services. As for products, most of the grain was sent to Cyprus, agricultural products and leftovers, as well as fuels. But they imported alcohol, vinegar, pharmaceuticals and essential oils.