Chaos as Prerequisite for Aggression 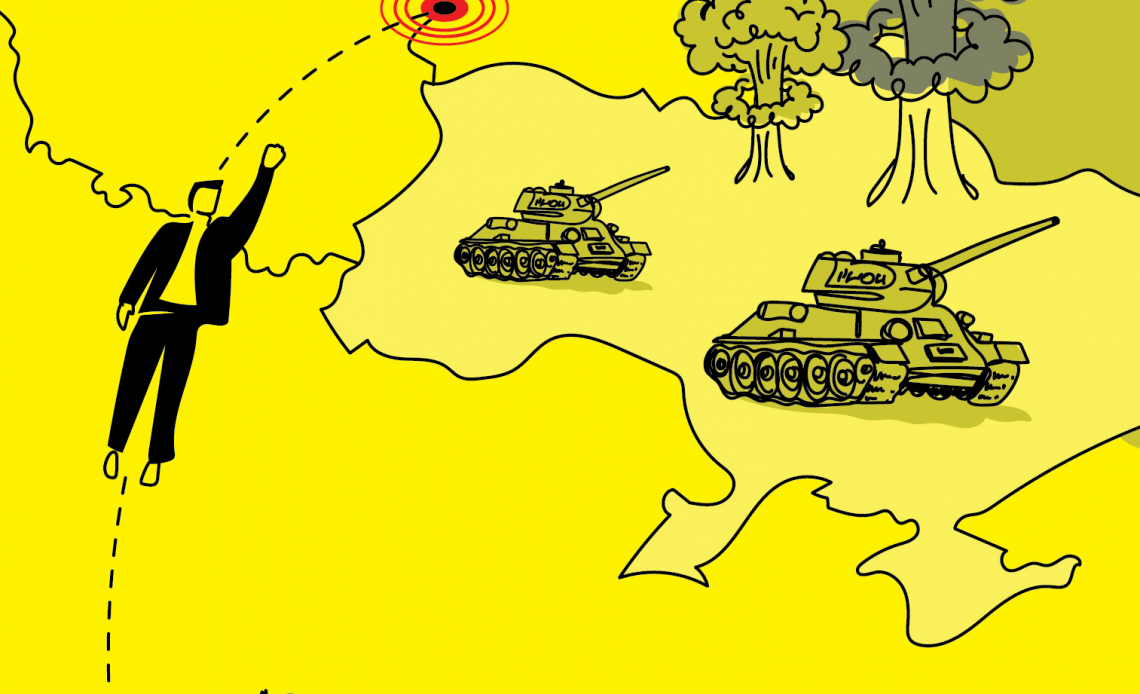 Information waves about the powerful build-up of Russian military groups around Ukraine have been rising and abating periodically in the global media landscape in recent years since the onset of the Russian occupation of Crimea and parts of Donbas. Sometimes these waves are linked with Russia’s real preparations, sometimes they turn out to be purposeful information and psychological operations to create an unstable situation in Ukraine and destroy European and Euro-Atlantic solidarity in the face of Russian aggression.

Already at the Zapad-2017 strategic exercises, the new group around Ukraine tested its capabilities to carry out offensive operations in the three abovementioned directions. At the same time, the territory of Belarus was used for the rapid redeployment of Russian troops into the depths of the battleground and the creation of a bridgehead for combined military operations against Poland and the Baltic states, as well as Ukraine. By the way, the latest migrant attack through the territory of Belarus is carried out by Russia (I have no doubt that this attack was planned and organised by Moscow) according to a very similar scheme and, as well as the Zapad-2017  scenario, is aimed at aggression against the Baltic states, Poland (including through the so-called Suwalki Corridor), and Ukraine.

Subsequently, the Russian military infrastructure around Ukraine was enhanced and built up. Regular military exercises were conducted with the participation of formations and units that are constantly stationed in the immediate vicinity of the Ukrainian border, as well as units redeployed from the depths of Russian territory, apparently to increase the offensive potential in the western direction.

In parallel, Russia maximised the joint force grouping (Navy, Air Force, Land Forces) in the occupied Crimea, which ensures Russia’s dominance in the Black Sea (by increasing the number of surface vessels and submarines), the establishment of a total zone A2AD (Anti-Access / Area Denial) both in the sea (surface and underwater) and airspace around Crimea (due to the deployment of a powerful aviation group and modern air defence systems in the occupied Crimea). The total missile volley of submarines, surface vessels, and surface missile systems of the Russian Black Sea Fleet currently reaches 200 missiles (including Kalibr long-range cruise missiles), posing a threat not only to the entire territory of Ukraine but also much of Europe.

In 2021, Russia’s preparations for large-scale aggression against Ukraine reached its apogee. First, in April-May this year, Russia conducted unplanned strategic manoeuvres, involving up to 110,000 troops, both from the permanent deployment units and those redeployed from the depths of the Russian Federation. Then, in September, Russia conducted Zapad-2021 strategic exercises (including in the territory of Belarus), which actually repeated the scale of the April manoeuvres. In November, Russia again began an intensive operation, which was noticed by Ukrainian and Western intelligence and provoked a stormy reaction in the media.

The main question that arises in this situation: is Russia really getting ready for a large-scale military operation against Ukraine and what is the probability of its conduct, based on data available from open sources?

At the same time, unlike in 2014, when Ukraine was in a difficult situation of “strategic embarrassment,” when the systems of state and military administration were disrupted, and the level of combat capability of the Armed Forces was low, now Russia will find it difficult to implement its plan successfully. In any case, in the current circumstances, a large-scale military conflict between Russia and Ukraine will have catastrophic consequences not only for Ukraine and Europe but also for Russia itself. Although Russian politicians and the military are often influenced by propaganda euphoria, it is hoped that Russian intelligence reports objective information to the Kremlin about Ukraine’s real readiness to counter military aggression.

Thereby, it is likely that Russia’s constant military manoeuvres near Ukraine are part of a broader Kremlin’s plan based on Putin’s geopolitical efforts to return the role of Major Power to the “new Russian empire” and occupy a prominent place in the new, so-called orchestra of nations (group of leading world countries) that is to address issues of global development and division of the spheres of influence.

In this regard, elements of this plan, apart from military preparations near Ukraine, may include Russia’s migrant attack against Europe through Belarus, an artificial energy crisis caused by the reduced Russian gas supplies to Europe, participation in armed conflicts in the Middle East and Africa, constant disinformation campaigns, and demonstration of the latest military technologies that could threaten the security of the United States and other NATO countries (in particular, the recent demonstrative destruction of a satellite by a new, anti-missile and anti-satellite system).

The tactical tasks of this complex “hybrid” offensive may be to obtain the consent of the U.S. President for another meeting with Putin to negotiate new concessions in the international arena, inter alia, launching the Nord Stream 2 gas pipeline as soon as possible, forcing Ukraine to make concessions on Minsk agreements implementation under the Russian scenario, ensuring the final “Anschluss” of Belarus.

Possible strategic objectives of Russia’s complex attack are: geopolitical breakthrough into the orchestra of nations, full control over the post-Soviet space, the so-called Finlandization of Ukraine (i.e., Ukraine’s official declaration of neutrality, ban on NATO membership, slowdown of accession to EU), long-term dominance in the European energy market, consolidation in the regions of interest for the Russian Federation (Africa, the Middle East). In fact, it is Putin’s dream – revenge for “the greatest geopolitical catastrophe of the 20th century – the collapse of the Soviet Union,” that is, the restoration of “Russia’s global leadership.”

Meanwhile, it is the military instrument of pressure that is key in this Russian hybrid geopolitical operation. If Russia fails to achieve these goals, the Kremlin will become increasingly aggressive in demonstrating its readiness to attack Ukraine again. At the same time, the likelihood that Russia will implement its threats directly depends on Ukraine’s ability to effectively counter Russian aggression.

According to my estimates, the most probable developments at this time may be Russia’s attempt to conduct a rapid (I would say lightning) operation with air and sea landings from the occupied Crimea to occupy territories in southern Ukraine to create a land corridor from Russia to Crimea, capture the infrastructure for water supplies to the occupied peninsula, as well as, if possible, closure of Ukraine’s access to the sea. Such an operation can be successful only if the top military and political leadership are unable to respond immediately to the actions of the Russian Federation. If Ukraine does not launch a defensive operation in response to Russian aggression within hours of landing, Russia will occupy new territories and issue an ultimatum to Ukraine: if Ukraine dares to counter, Moscow will launch large-scale aggression in all directions.

That’s why, in my opinion, the resilience and capacity of the Ukrainian nation to respond immediately to a military attack by the Russian Federation is a key aspect. The situation in February-March 2014, when the state lost its ability to make decisions in the field of defence and security, was ideal for Russia’s attack. This is exactly the situation that Russia would like to repeat. This is possible, for example, in case of an outbreak of radical protests in Ukraine (sparked by the deteriorated socio-economic situation, escalated political confrontation, or as a result of a targeted operation by Russian intelligence), which would lead to the inability of the military-political leadership to perform its functions and the loss of control over the security and defence sector. In this case, Russia could once again take advantage of favourable conditions and conduct several rapid tactical operations, and then – as the situation develops – try to expand the zone of occupation with the parallel destruction of Ukraine as a state.

Therefore, my conclusion and forecast for the further development of the situation: Russia will constantly increase the level of military threat against Ukraine, daring to conduct the operation only in case of internal destabilisation of Ukraine and the inability of the defence system to respond quickly to new Kremlin aggression. Based on this, it is most likely that Russia will use the military threat as an instrument of pressure, along with other hybrid means. With a parallel effort to kick off chaos in Ukraine, using any problems and contradictions that exist in the political, social, or other spheres. We will see soon how successful this strategy will be because time is playing against Russia – the Ukrainian army is getting stronger every day and the Kremlin’s efforts to consider military options for settling the “Ukrainian issue” will fade away after a while.