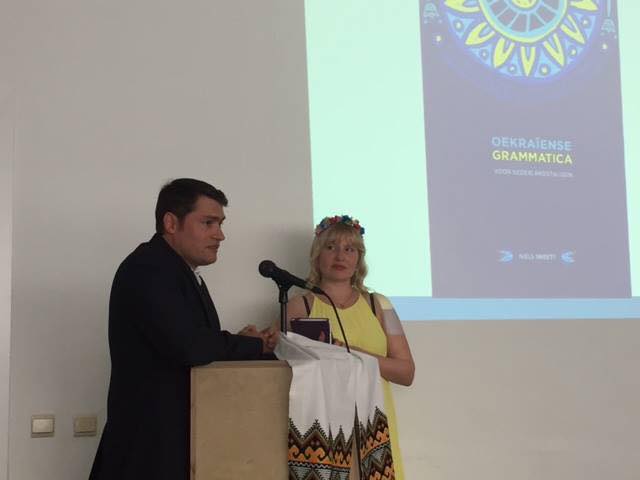 Dutch speakers who wish to study Ukrainian now have access to excellent learning material. Belgian researcher Niels Smeets has written the First Ukrainian Grammar for Dutch speakers, a several hundred pages book which includes all the necessary information for those who decided to learn this East-European language. Promote Ukraine published the Grammar but we also talked to Niels to see what his motivation was to write such a treasure.

– Why have you decided to write the first Ukrainian grammar for Dutch speakers?
Already during my studies of Slavonic Languages at KU Leuven, I was looking for a decent grammar book to study Ukrainian, yet I was unable to find one in my (Dutch) mother tongue. Moreover, I had to ascertain that not a single Belgian or Dutch university organizes Ukrainian language courses at the moment. Therefore, I decided to study the language and at the same time write a grammatical compendium for Dutch speakers myself.

– For whom is this book, who is the audience?
The book offers a complete overview, structured on different word type categories of the Ukrainian language so that it can be used as a reference work for advanced speakers to quickly find answers to particular questions. For beginners, it offers a full description of every aspect of the Ukrainian grammar that makes maximal referrals to pendants in the Dutch language. However, it must be said that the second tool of a beginning language student, a dictionary, is still missing in the Dutch language. I am working on a Ukrainian-Dutch dictionary, but I will need help to realize such a comprehensive project.

– Have you written the grammar book by yourself or did you receive some assistance from Ukrainians? How long did it take to finalize the book?
It took me about two years to finish the book. During the first stage, I wrote down every grammatical rule I could find and decided on the book’s structure on the basis of my experience as a language student. Given my day job as a research fellow at KU Leuven, I spent the most time writing the book after nightfall and during weekends. Following this year of writing, I opened up the preliminary version of the book for review. In seven meetings with Prof. Dr. T. Soldatjenkova (KU Leuven), we reviewed the book section by section to improve the structure and readability for students that have no background in Slavonic studies. In the third stage, I required the critical eye of Ukrainian native speakers. You might imagine that it is not easy to find people who share my motivation to invest their precious time on a voluntary basis. Luckily, I met Marta Barandiy  – the chairwoman of NGO Promote Ukraine – who acquainted me with enthusiastic volunteers that share the concern of promoting the Ukrainian language in the Dutch language area. Literary translator Ukrainian-Dutch Natalia Karpenko and language teacher Valentyna Poplavska profoundly reviewed the Ukrainian sentences and offered splendid suggestions for fine-tuning the book.

– What can you tell us about the method of the book, did you have a special approach?
As I had a firm background in Russian and Polish, it was rather easy to read and understand the Ukrainian language. During these readings, I singled out grammatical puzzles that I could not explain on the basis of my previous knowledge. Thereafter I shifted the focus from an inductive to a deductive approach: starting from a grammatical rule I sought to explain, I surfed the internet in search of usable example sentences in Ukrainian media. To find them, several criteria had to be met. First, the sentence should be straightforward and understandable for a Dutch speaker, and if not, I had to simplify the sentences. Second, I varied the examples in terms of word genus, aspect, and one of the seven cases to maximally illustrate the peculiarities of the rich Ukrainian language. Third, the example sentences were carefully selected to fit the societal, cultural, and political context. This last criterion guarantees that the book tells the story of contemporary Ukraine. It reflects the current issues Ukraine is facing so that students also learn something about the country.
– Tell us about yourself, do you have some connections to Ukraine? What are your professional interests?
I have no family roots in Ukraine. The Ukrainian story started during my Slavonic language studies at KU Leuven. The first city I visited to study Russian was Odessa, now some 8 years ago. Later on, I also met many Ukrainians during a summer course in the Polish language in Wroclaw. After my studies, I started working as a political scientist at KU Leuven. My mandate consists of analyzing Russian energy policies. Given this topic, Ukraine as an energy transit country is an important factor to take into account. At the time the Maidan revolution began, I also got involved in commenting on the events in Flemish and Dutch newspapers and I considered it my duty to study Ukrainian more thoroughly. That is when I started to work on the book, some two years ago.

​- How do you disseminate the book?
The grammar is available as an e-book for download at no charge on the website of Promote Ukraine. Now, students interested in Ukraine finally have access to the Ukrainian language without first having to study Russian or other Slavonic languages. More importantly, there is no other threshold for studying Ukrainian than the search cost of typing ‘Oekraïense Grammatica’ in Google. I did not only deeply enjoy studying Ukrainian and the many challenges in finding explanations for grammatical conundrums it entailed, I also obtain intense satisfaction in sharing my knowledge to others, similar to my classes and public talks at university. This is what the book attempts to achieve, to pave the way for Ukrainian language studies in the Dutch language area.

This Sunday in Brussels: March "Stand with Ukraine"