There are thousands of Ukrainians abroad, who want to return to their homeland, most of them are staying in Russia, Italy, and the USA. “Promote Ukraine” was informed about this by Maxym Kovalenko, Head of the Crisis Management Department of the Consular Service of the Ministry of Foreign Affairs of Ukraine. Migrant workers and other Ukrainian citizens, through the spread of the coronavirus and the quarantine measures implemented, can seek the assistance of diplomatic institutions abroad in the framework of the “Protection” program, which was announced in early April.

Which countries have the biggest number of Ukrainian citizens who want to return to Ukraine?

The Foreign Ministry assesses the situation not only by the number of our compatriots. The approach to each Ukrainian is completely individual; we are taking into account not only people’s problems but also certain issues in the countries where they are. The largest number of Ukrainian citizens is stuck in the Russian Federation – more than 1600. These are the people who have registered under the “Protection” program. Next comes Italy – more than 1,100 compatriots, the United States – about the same number. Then on the list are the Arab Emirates, Thailand, Germany, and Indonesia. Just over 13,000 people are waiting to return to Ukraine. But many more of our compatriots, who in one way or another need help, contacted Ukrainian embassies and consular offices around the world. That’s over 16,000. And about 9,000 of our citizens insist on leaving.

What problems do they have?

They have, of course, completely different issues – from elementary household problems and ending with an overdue insurance policy or lack thereof. There are now just over 2,000 such compatriots abroad. These include those for whom the situation is really close to difficult or critical and who need an immediate return. For these and other of our fellow citizens, the “Protection” program was started.

It includes a huge range of issues that are addressed by diplomatic, consular agencies to protect the rights and interests of Ukrainian

citizens abroad. I am referring to overdue documents, visas, residence permits, this is a very acute issue in European countries, the United States, and other countries, where our citizens are staying.

Cooperation with the law enforcement agencies of these countries is underway to protect Ukrainian citizens’ rights and interests. The “Protection” program provides objective information on the possibility of returning to Ukraine both from European countries and from remote corners of the world – Africa, America, Oceania. Our compatriots are also informed about the epidemiological situation in respective countries, its exacerbation, they receive advice and consultations – including on household issues: what shops, pharmacies are open, where they can get this or that assistance. Connections are being established between Ukrainians who unwillingly stay abroad and in need of help, and NGOs of Ukrainians, associations of our compatriots, and generally all those structures that are ready to provide practical assistance.

If, for example, a Ukrainian citizen has become ill abroad, he has a coronavirus, and his health insurance is over. How can he get help?

In most countries, free emergency medical care is introduced, regardless of whether foreigners and, of course, citizens of Ukraine have a health insurance policy or any other permit to stay in the country.

Even if our compatriots have any questions or difficulties, they should contact the embassy or the nearest consulate by calling the hotline for practical advice and assistance.

You said that 13,000 Ukrainians are waiting for their return. And how many are back?

At one time there was an evacuation of our compatriots from Wuhan city of Hubei province of the People’s Republic of China. At present, many of our fellow citizens are waiting for an opportunity to return to Ukraine. Currently, European countries have the option of returning via the Austria-Hungary land transport corridors or from Poland and other countries sharing a border with Ukraine.

Or through the territory of the Republic of Belarus, this is the city of Minsk. Again, even this last European country which has not yet closed the border has at the same time introduced mandatory observational measures. So the question is a little complicated and sometimes not a little, but again these are realistic options for returning to Ukraine now.

Do Ukrainian citizens pay for their return?

Yes. These are commercial flights, they sell tickets, so of course, people can take this opportunity. But as for the transport corridors and crossing the state border of Ukraine by land, here, of course, consulates are involved if it is needed. Also, the central executive authorities, the border service, all the structures are involved so that our fellow citizens can return to Ukraine.

Are there any deadlines for returning Ukrainian citizens? 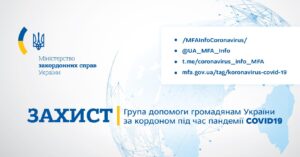 This is not so much about a specific timeframe, not about transporting them as soon as possible. Although this is also a very hot issue, the timeframe here is certainly important, as many of our compatriots abroad have big difficulties. But it is more about the need to address logistical issues, as not only in Ukraine but also in many other countries in the world severe restrictions have been imposed on border crossings, transit, and all other related issues. Our embassies and consulates provide practical assistance for transit through certain countries.