PS752: Released intercepted tower communications show that Iran knew about the missile launch from the beginning

The airport tower in Tehran was informed of the shooting down of Ukraine International Flight PS752 in real-time by other pilots approaching and departing the airport. In the published recording it becomes clear that an Iranian pilot witnessed everything from the launch of the missile to the second it hit the Ukrainian airplane. Confirmed by President of Ukraine Volodymyr Zelenskyy 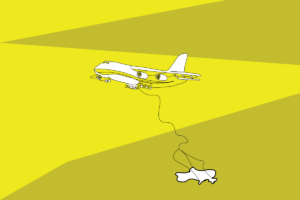 TSN released the intercepted tower communications between the Tehran airport tower and a pilot of an Iranian civilian plane. As said in the Ukrainian report, it serves as evidence for the fact that Iranian airline services did not only hold back the full truth about the reason for the tragedy but also observed the entire missile launch up until the final moment of the crash.

As the Ukraine Airlines flight PS752 was taking off in the early morning of January 8 of this year, the Iranian Aseman Airlines flight EP3768 was heading to land on Tehran airport. At this very moment, the pilot witnesses the missile launch and communicates this information to the Tehran tower. The full recording is about five minutes long and gives full insight into everything the pilot saw.

In the record, one can hear the EP3768 pilot saying that he is seeing flares “as if from a missile”. Further on he is describing how the light is flying from the direction of the city and later confirms that he saw the explosion. In the meantime, the tower was trying to reach Ukraine International Airlines PS752 several times, which was left unanswered.

The Ukrainian Tehran-Kyiv flight crashed only moments after taking off from Tehran airport with no survivors.

At first, Iran claimed that technical issues were the reason for the crash. Three days later, on January 11, it was said in an official statement that the plane was taken down by a missile through “human error”.

Ukrainian President Volodymyr Zelensky said after the statement that Ukraine wants Iran to fully take on the responsibility for the tragedy, carry out investigations, and repatriate the victims’ bodies.