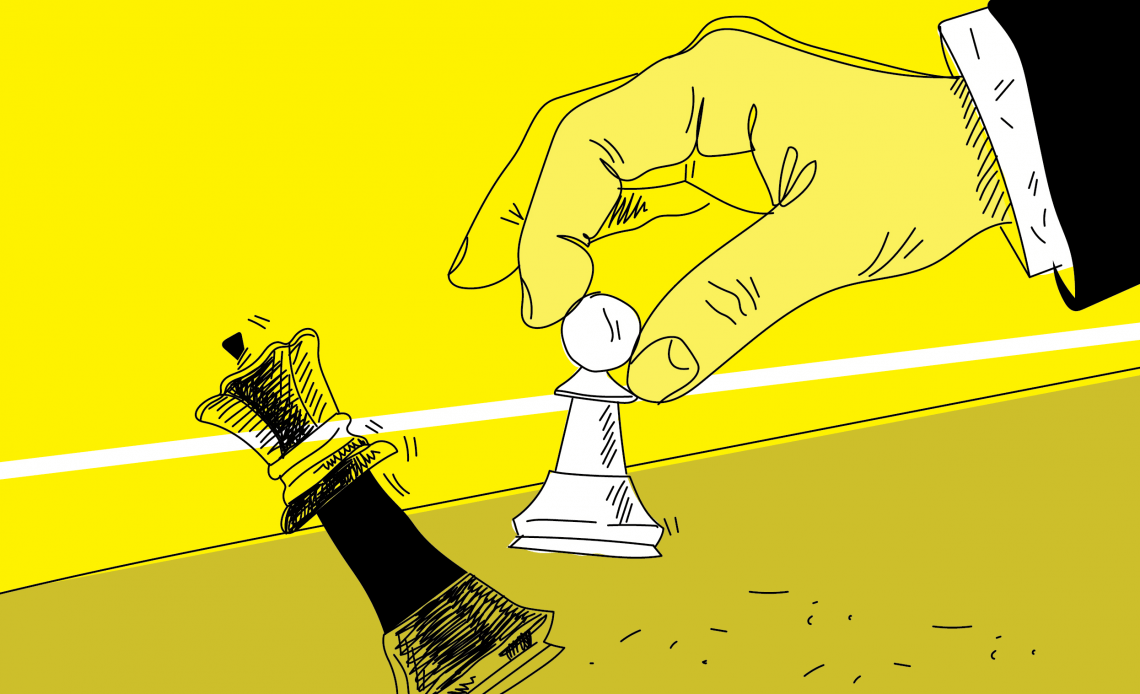 The Russian Federation continues to put pressure on Ukraine and the West. Its goals have long been known – the creation of permanent controlled chaos, which would be convenient and understandable only to itself. Although we understand the goals, we are still trying to “read” Moscow‘s strategy and understand the key – how to respond effectively to this new reality of confrontation.

It has been popular since the Middle Ages to compare political and military strategy with chess. Back then you could really find a lot in common – gradual and slow moves, a common set of rules for players, open battlefield. Chess, of course, mimicked such a comparison, and pieces were called “knights,” “bishops,” “kings,” and “queens.”

But both technology and politics have undergone some changes since ancient times. And today, if we want to follow the analogy with chess, we must look at politics as a simultaneous play. The boards not only lie in front of the international grandmasters on the tables but are also placed in all available dimensions, both real and conditional. And if we talk about the game against Moscow, while we consider the next move with a chess piece, the Kremlin begins to handle cards.

Simultaneous threats in many thematic and narrative areas underpin the current strategy of the Russian Federation. The multi-vector nature of the created threats must not make it possible to respond to each individual threat without the risk of provoking an escalation in other threats. The diversity of threats, in turn, prevents the unification of response and makes opponents disperse their resources. Each individual threat can be used at any given time as a decoy for another threat – in a way it is convenient for the organiser of this game of chaos.

The main problem with such a geopolitical game is simultaneously the main advantage of such an approach: the rule is the absence of rules. The rules are flexible and offer various approaches to the use of tools; they are shaped according to the situation in each individual context. Let’s then try to discuss the strategy of the Kremlin trickster and discover what rules he outlined for this crisis.

Queen up the sleeve

The build-up of troops at the border with Ukraine has been hitting the headlines of the world media over the past month. Although the first reports on aggressive overtones from the U.S. and British intelligence have been ignored by the Ukrainian political elite, full internal and external preparations for a potential winter invasion are already underway.

In parallel, another situation developed, which at one point attracted the attention of both Western politicians and journalists – the crisis with Middle Eastern migrants on the Belarus–Poland border. The issue of migrants and responsibility for their humanitarian situation has become a sort of stigma of European space. In many respects, the Russian Federation contributed to this, by inflating the negative situation with migrants in information and economic terms, focusing on the negative narratives it needed.

It soon became clear that the creation of this situation was an element of distraction from the build-up of troops on the border with Ukraine. But these are just two games out of a whole bulk of political combinations. At that time, namely on 15 November 2021, the Russian military destroyed the old Soviet Tselina-D type satellite on orbit with their latest anti-satellite missile (it could be the s-500 system or the A-235 Nudol strategic missile system – Russians did not disclose all the details of the test). The destruction of the satellite on orbit creates a real space shrapnel-type projectile: every fragment of a satellite that travels in Earth orbit becomes a kind of kinetic projectile capable of hitting other space objects, including the International Space Station, where the American crew stays currently.

Just two days later, on 18 November, a new escalation of the Nagorno-Karabakh conflict began, in which Armenia tried its best to involve Russia (which, in turn, ignored its CSTO commitments). Azerbaijan and Armenia accused each other of provocations, but it was the Azerbaijanis who immediately gained the tactical initiative and managed to expand the sphere of their influence and gain control in the Armenian-occupied parts of Nagorno-Karabakh area.

Today, we have two situations that need to be covered up and two situations that are informationally covered. The first case is the build-up of troops on the border with Ukraine and the refusal to help its ally. The second, provocative and popular in the media, is the destruction of the satellite and the sufferings of migrants on the Polish border. First case issues require Moscow’s strategic approach to implement them, second ones though are aimed solely at the information agenda and attracting attention to the provocative and sensitive topics for the Western media landscape. Pushing for one of the narratives – for example, the strengthening of the Ukrainian armed forces in the face of the threat of Russian invasion – provoked increasing pressure on migrants and the flow of counter-accusations of creating a humanitarian crisis. In this move, Russia got considerable  support from the already  vassal regime of self-proclaimed president of Belarus Alexander Lukashenka, who allowed the blurring of the subjective field of conflict and thus took a part of the reputational and informational brunt.

How to drive the Kremlin into a stalemate?

Unfortunately, we can’t talk right now about driving the Putin regime into a stalemate. This is a matter of strategic prospect and many separate games have yet to take place on all possible platforms. What we can do for now, is  to rely on the termination of Moscow’s hybrid strategy with a series of counterattacks and deterrents that will create conditions under which the continuation of such a strategy will not bring the desired result and its maintenance will be unreasonably expensive.

What steps need to be taken? First, we need to learn to respond flexibly and outside of the box. Present-day problems require new solutions. Standard measures in the form of sanctions, entry bans, political restrictions on contacts and new projects are basic tools that should undoubtedly remain the basis of the deterrence. However, at a time when our opponent is changing tactics, we cannot rely on old measures alone. Why not, for example, try to support the repressed national movements inside Russia? Or would it be superfluous to consider the environmental component of Russia’s energy projects – not only the notorious Nord Stream 2, but also that of Nord Stream, Yamal-Europe, and South Stream? How would Moscow react to the West’s attempt to codify and shed light on all the war crimes of the Russian regime and to compile a list of war criminals? All these steps may seem small but when taken in a system they can reproduce the level and nature of the attack itself and, therefore, give it a decent response.

Second, we have to regain the initiative. Certain rules of conduct of a battle are transposed at all levels – from the usual duel of two angry fighters to a hybrid confrontation of world powers. One of these rules teaches us that to win you need to keep the initiative in your hands and make the enemy react to your actions. In this way, the opponent will do what you need and will not have time to strategise. In early 2021, the West, through the active geopolitical movements, new exercises, and increased cooperation with non-NATO and EU allies, was able to seize the strategic initiative and force Russia to respond to new circumstances rather than create them.

Third, we should be united. This is a superpower that the West and its partners can set against almost any threat. Much of Russia’s aggressive action is aimed at destroying a united position and creating an alternative within the West – Russian, ultra-conservative and anti-Western alternative. Therefore, political cooperation, unity in strategic issues, and a coordinated position in conflict situations is the basis for response to the current hybrid threats.

In the situation of modern conflicts, the most important thing to gain victory is to maintain our understanding of reality. The versatility of understanding the reality is used by autocrats and opponents of democracies to distort the essence of concepts and to uphold their aggression. Similar tactic is used in  the current aggression of the Russian Federation against Ukraine and its Western partners. We will be able to win this modern war only by understanding a genuine reality of what is happening and having the courage and coordination to respond to these threats.